BBC presenter John Beattie has revealed he was stopped by police for suspected drink driving after being spotted having an alcohol-free beer.

The Radio Scotland host was breathalysed at the side of the road after being reported by a member of the public.

He was travelling home from a holiday on Islay when he stopped off in Inveraray, Argyll, for fish and chips. 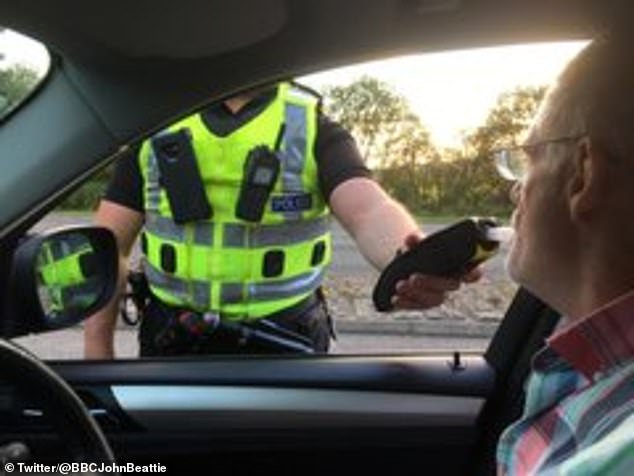 The former Scotland rugby international washed down his meal with a bottle of alcohol-free beer at the town’s harbour before jumping back in his car and driving off.

The police received a call from someone who thought Beattie had got behind the wheel while over the limit on Sunday night and he was pulled over on his way home to Glasgow.

Beattie, 62, said his reading was ‘zero’ and posted a photograph of himself taking the breathalyser and the two officers who stopped him on Twitter.

‘After an amazing holiday on Islay someone in Inveraray told the police I’d been drinking beer at the harbour last night before jumping back in my car again,’ he wrote on social media.

‘They pulled me over blue lights etc on Loch Lomondside….. The reading was zero. I was using up an alcohol free bottle with excellent fish and chips.

‘The lads were ok with me taking the picture. So, back to work today.’

END_OF_DOCUMENT_TOKEN_TO_BE_REPLACED

END_OF_DOCUMENT_TOKEN_TO_BE_REPLACED
Recent Posts
We and our partners use cookies on this site to improve our service, perform analytics, personalize advertising, measure advertising performance, and remember website preferences.Ok