BBC Weather: Rain and snow to move in across the UK

BBC Weather meteorologist Sarah Keith-Lucas said a band of persistent rain will be crossing into the UK through Friday, with western areas of the UK taking the brunt of the unsettled front. In light of the incoming downpours, the Met Office has issued a series of yellow weather warnings for heavy rain and snow, with 37 flood warnings in place across Britain. Ms Keith-Lucas said: “The weather forecast as we head into the weekend…we’ve got something a bit wintry on the way.

“There’s going to be some rain, some snow especially in the south through the course of the weekend and that’s down to the fact that, although we’ve got that very mild air with us at the moment, there’s colder air in the north that’s going to be pushing its way south.

“Where those two air masses meet, we’ve got a weather front and a low-pressure weather system developing towards the southwest through the course of the weekend.

“That is going to spill in some colder conditions and snow across parts of Wales, perhaps southern England as well. 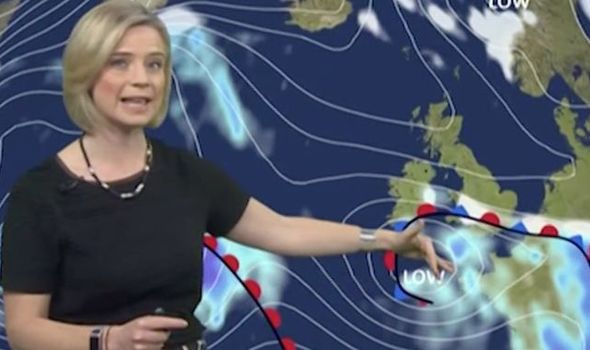 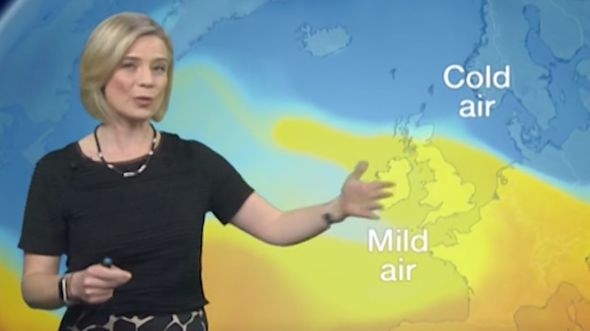 The BBC Weather forecaster added: “It is going to be that messy mix of some rain and sleet and snow over the higher grounds.”

Forecasters have warned: “An area of rain pushing in from the southwest through the early morning will readily turn to snow in places as it encounters colder air.

“There remains a good deal of uncertainty in how far north the rain and snow will get, before the band stalls and starts to move south again as it eases.” 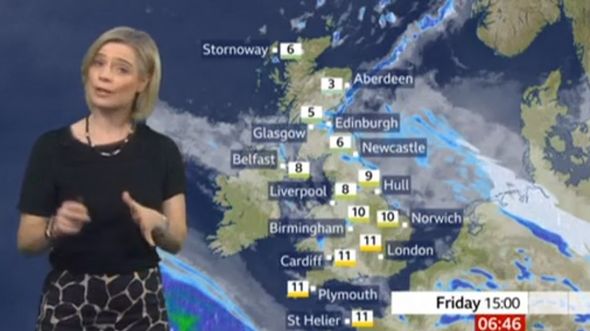 A very low chance of perhaps as much 7.8 inches (20cm) over highest parts of the Shropshire and Snowdonia remains.

Netweather has cautioned of potential flood risks, with rain due to hit areas already saturated from heavy rainfall and snowmelt.

The forecasters write: “Low pressures are just barrelling in from the Atlantic all week.

“There is milder air to the south but still cold air holding on in the north which brings the likelihood of snow on the leading edge. 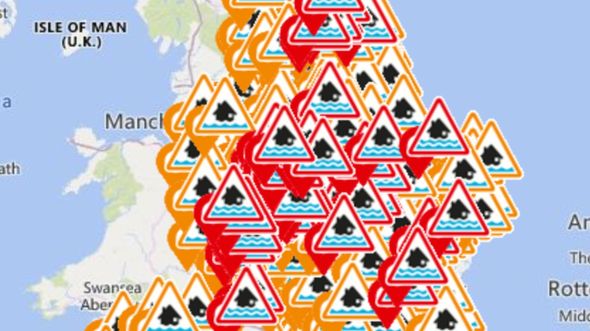 “These frontal bands will bring more rain to already sensitive areas, adding to the saturated ground, into the river catchments and melting the weekend’s snow.”

A Met Office spokesperson told Express.co.uk “wintry conditions” were forecasted for the weekend and into next week across the UK.

Netweather meteorologist Jo Farrow added: “There will be a succession of Atlantic fronts moving in, bringing rain and also milder air, so snowmelt will add to the already sensitive ground and river situation along with the extra rain.

“By midweek temperatures in Northern Ireland and the southern half of Britain will be at 7 or 8C, even higher for southern Britain by Thursday.

“The falling rain will speed up the melt of any lying snow. “