BBC Weather forecaster Chris Fawkes warned the heavy rain suffered across the nation last week is likely to continue through Monday before a devastating weather front strikes parts of the nation. Mr Fawkes said the low pressure will continue to sit over the UK on Monday and unleash rainy downpours across Northern Ireland and northern Scotland. He added: “Through Monday we have got a weather front that is extending in across Wales and parts of northwest England.

“That is going to be slow-moving. So, if you find yourself underneath this narrow band of rain, it could be with you for quite a length of time.

“The far north of England, Northern Ireland and Scotland. A mixture of bright spells and heavy and thundery afternoon showers.

“Across much of south and east Midlands, East Anglia and southern counties of England, it is a largely dry day with some bright or sunny spells at times in the June sunshine – wherever that comes out it will feel pleasantly warm. 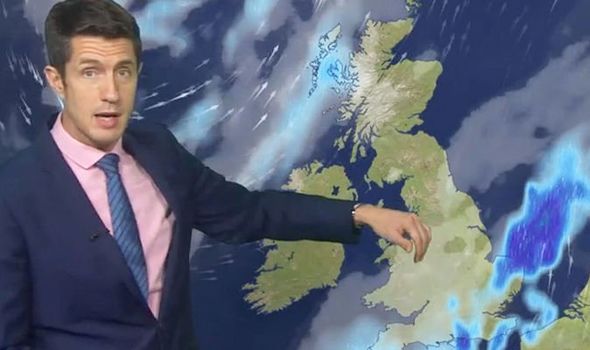 The BBC forecaster warned the wettest weather will start off across western Scotland on Tuesday before it pushes eastwards into the Grampians.

The rest of the UK is set to remain dry on Tuesday before it becomes cloudy and humid across southern parts of England and Wales.

But Mr Fawkes warned of heavy showers late on Tuesday for parts of the UK.

He said: “Now, the Met Office has issued a warning for some thundery rain to move up from the south.

“The amount of rain we are going to get is going to vary a lot from place to place. However, with the ground completely saturated after last week’s rain, we could see surface water flooding building up very quickly where we get the heaviest of those thunderstorms coming through.

“And there is quite a lot of uncertainty about how far east or west the storms will be.

“It does look like it is mostly England that is at risk, although perhaps a bit of damp weather at times across eastern Wales.

“And there will be some downpours across eastern Scotland and Northern Ireland.

“But the weather has not been as wet here. So hopefully that rain won’t have any significant impact.”

The Met Office yellow weather warning for England on Tuesday and Wednesday states: “Thunderstorms may develop bringing torrential rain, hail and lightning to a few places, with potential disruption to travel and flooding.”

The Met Office has warned there could be delays and cancellations to public transport, driving conditions could become obstructed, and there is a “small chance” homes and businesses could be flooded quickly.