Beirut: ‘Signs of life’ detected under rubble one month after explosion

Possible signs of life have been detected by Beirut rescue workers in the rubble of a building that collapsed after a huge explosion a month ago, a rescue worker said.

A team with a rescue dog detected movement under a destroyed building in the Gemmayze area of the Lebanese capital, one of the worst hit by the blast, a local news agency said.

“These (signs of breathing and pulse) along with the temperature sensor means there is a possibility of life,” rescue worker Eddy Bitar told reporters at the scene.

Dressed in hi-viz jackets, rescue workers clambered over the building that collapsed in the blast after nearly 3,000 tonnes of ammonium nitrate stored in a warehouse detonated on 4 August.

About 190 people were killed and 6,000 more injured, with several people found under the rubble in the days after.

Floodlights were being set up at the Gemmayze building as the sun set, while a rescue worker carried a sniffer dog onto the mound of smashed masonry.

Mr Bitar said a civil defence unit had been called in to help with extra equipment needed to conduct the search.

Any search and rescue effort, if it became clear someone was still alive, would likely take hours, local media said.

As the rescuers dug down, the Lebanese military said it had discovered 4.35 tonnes of ammonium nitrate being stored near Beirut’s port. 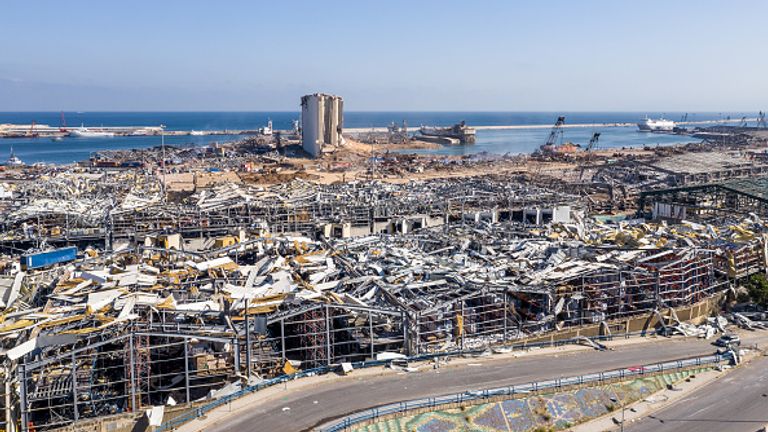 Army experts were called in for an inspection of the dangerous chemical in four containers.

A statement said they were “dealing with the material”, an apparent reference that it was being destroyed.

There were no details on the origin of the chemicals or their owner.

Those containers were moved and stored safely in locations around the port, the army said.

French experts and the FBI have been helping with the investigation into the blast, at the request of Lebanese authorities.

So far, 25 people have been detained over the explosion, most of them port and customs officials.

END_OF_DOCUMENT_TOKEN_TO_BE_REPLACED

END_OF_DOCUMENT_TOKEN_TO_BE_REPLACED
Recent Posts
We and our partners use cookies on this site to improve our service, perform analytics, personalize advertising, measure advertising performance, and remember website preferences.Ok