Exiled opposition leader Svetlana Tikhanovskaya has declared that a ‘peaceful revolution’ is underway in Belarus.

In a speech to the EU from Lithuania, where she is in hiding, Tikhanovskaya called on world leaders to back calls for free and fair elections to be held as soon as possible.

The 37-year-old insisted that protesters are neither pro-Russian or pro-EU, saying that they are simply pro-democracy, and want the right to decide for themselves.

Tikhanovskaya ran against Alexsander Lukashenko in Belarus’s election earlier this month, sparking mass protests when he claimed victory with 80 per cent of the vote – a result that is widely thought to be fraudulent. 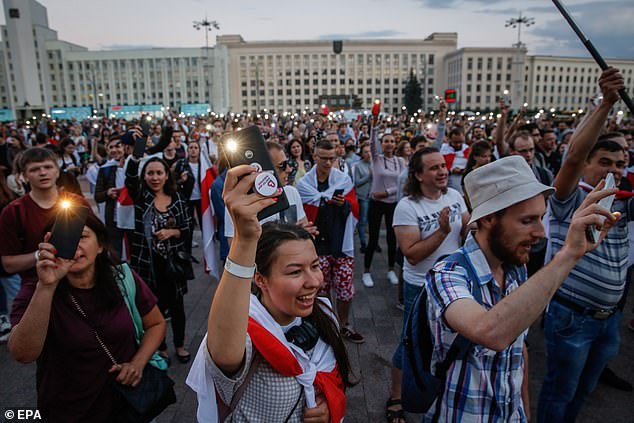 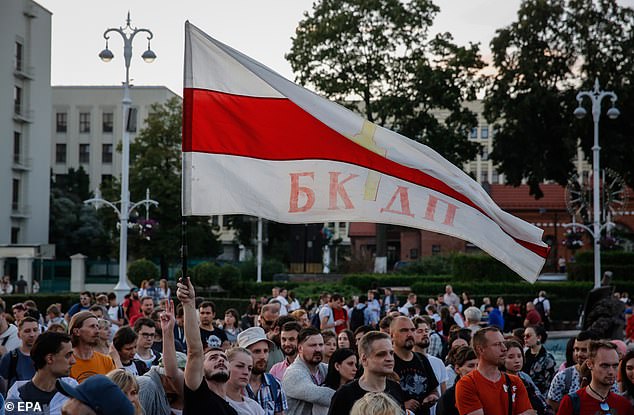 Belarus has been gripped by weeks of ongoing protests across the country, that have seen saw hundreds of thousands of people take to the streets of capital Minks (pictured on Monday) 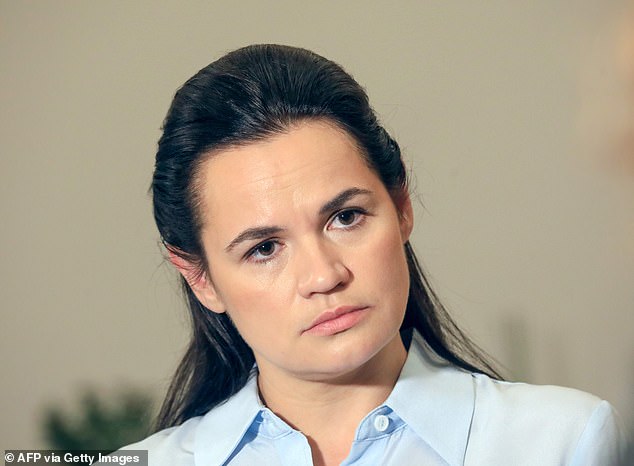 Tikhanovskaya, 37, a teacher before deciding to step in for her jailed husband at the election, fled to Lithuania after the vote amid fears she would be arrested

Speaking via video-link to the EU Committee on Foreign Affairs, Tikhanovskaya declared: ‘Belarus has woken up.

‘We are not the opposition anymore, we are the majority now. The peaceful revolution is taking place.

‘The revolution in Belarus is not a violent revolution, it is a peaceful striving of the people for liberty and freedom, for self-determination and basic dignity.

‘I call on all the countries of the world to respect the fundamental right of the country for self-determination.

‘I call on all the countries of the world to respect the territorial integrity of Belarus,’ she added, in seeming reference to Russia’s threat to send troops to the country. 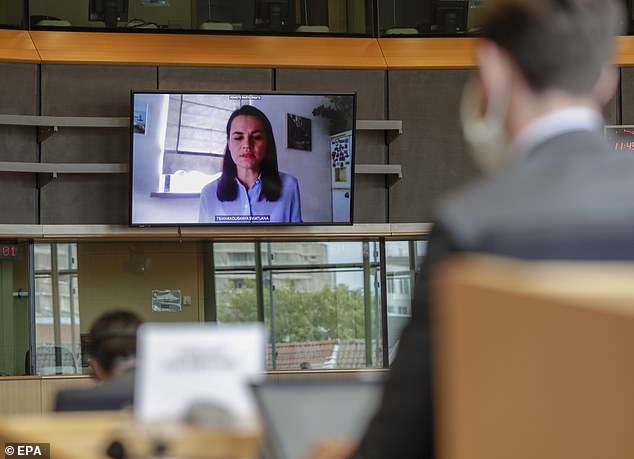 Tikhanovskaya spoke to EU committee member from exile on Tuesday, urging world leaders to back her call for free and fair elections to take place as soon as possible 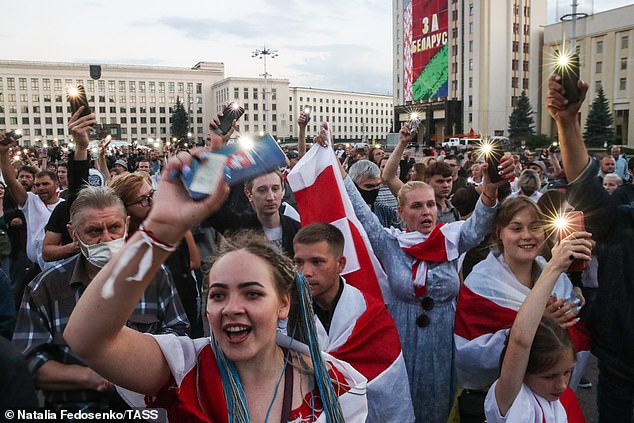 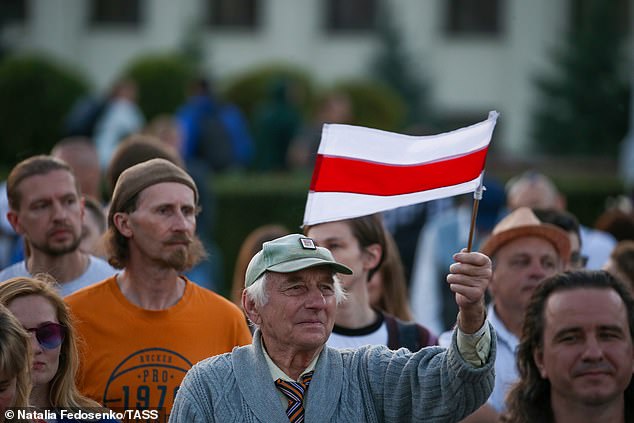 As Tikhanovskaya spoke on Tuesday, two opposition leaders who remained in Belarus appeared in court, having been arrested at a protest on Monday and accused of illegally organising a strike.

Despite most major opposition figures being in jail or in exile, Lukashenko has so far failed to put down popular protests against his 26-year rule.

Hundreds of thousands of people took to the streets over the weekend in what is thought to be one of the largest protests in Belarus’s history.

Lukashenko has denied election rigging, called the protesters ‘rats’, and claimed they are being funded from abroad.

Olga Kolvakova, the main representative still in Belarus of opposition candidate Sviatlana Tsikhanouskaya, appeared in court, as did Sarhei Dyleuski, who has led strikes at the Minsk Tractor Factory, one of the country’s biggest plants.

The two are leaders of the opposition Coordination Council, set up last week with the stated aim of opening negotiations with the government.

Lukashenko called the council an illegal attempt to seize power and prosecutors have launched a criminal case against it.

The council includes dozens of figures representing broad swathes of society, among them author Svetlana Alexievich, winner of the Nobel Prize for Literature, who has been summoned for questioning on Wednesday. 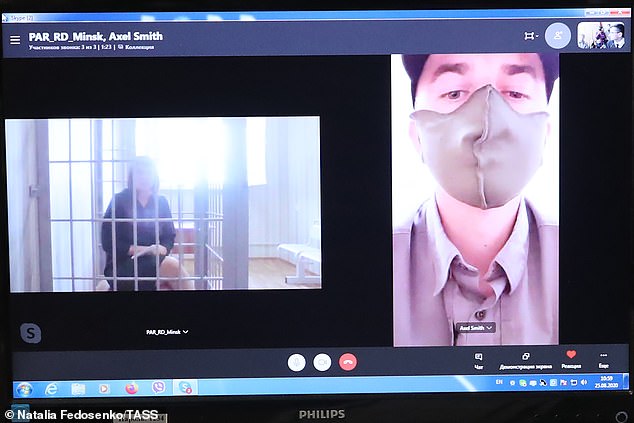 Olga Kovalkova (left), a member of the opposition who stayed in Belarus after the vote, appeared in court today after she was arrested at a protest on Monday 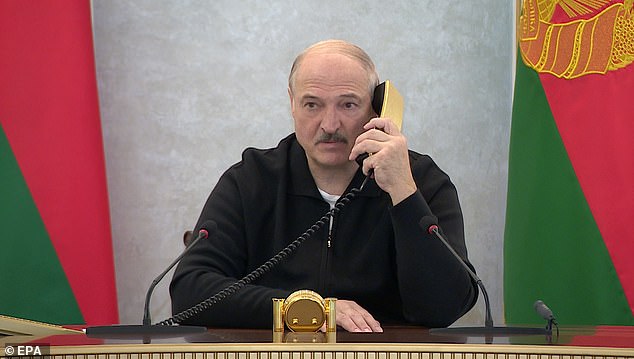 Lukashenko has flatly refused to hold fresh elections, likening protesters to ‘dogs’ and accusing them of being funded from abroad

Belarusian media released photos of Dyleuski seated in court in a metal cage. Photos of Kolvakova in court were not available.

Later on Tuesday, teachers were scheduled to hold a demonstration. Lukashenko has threatened to fire any teachers who do not support the government.

Tsikhanouskaya fled to Lithuania after the election, amid fears that she was about to be arrested.

Belarus is the closest ally to Russia of all former Soviet republics, and Lukashenko’s fate is widely seen as in the hands of the Kremlin.

While the Kremlin wants to keep the country within its sphere of influence, the fate of Lukashenko does not appear to be its primary concern.

Putin has been in contact with Lukashenko, a personal friend of his, since the vote – and in a phone call on Sunday offered to send doses of Russia’s controversial coronavirus vaccine to the country.

The deal means that Belarus will effectively be participating in Phase 3 trials of the vaccine, which has been approved for use but has not undergone mass testing.

Lukashenko said the two leaders also discussed the situation both inside and on its outer periphery, ‘especially in the western direction’.

END_OF_DOCUMENT_TOKEN_TO_BE_REPLACED

END_OF_DOCUMENT_TOKEN_TO_BE_REPLACED
Recent Posts
We and our partners use cookies on this site to improve our service, perform analytics, personalize advertising, measure advertising performance, and remember website preferences.Ok