Border Force officers picked up 89 migrants in four boats on Sunday after more than 1,000 made the Channel crossing in the past week alone

It takes the number who have crossed so far this year to 4,521, with over 1,000 of those individuals making the journey in the last week alone.

French authorities stopped a further 28 people in one boat from making the treacherous crossing, according to the Home Office.

The busy week for Border Force began the Friday before last, May 28, when 336 migrants arrived in 19 boats – the highest daily figure recorded so far this year.

A Home Office spokesperson said: ‘Criminal gangs are putting profits before people’s lives through these dangerous and unnecessary crossings.

‘More than 4,000 people have been prevented from making the dangerous crossing so far this year and we are cracking down on the despicable criminal gangs behind people smuggling. 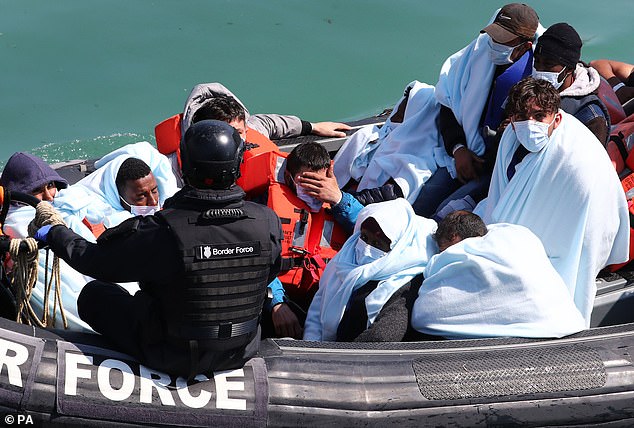 A group of people thought to be migrants are brought in to Dover, Kent, following a small boat incident in the Channel on Sunday June 6, 2021

‘Inaction is not an option whilst people are dying. The Government is bringing legislation forward through our New Plan for Immigration which will break the business model of these heinous people smuggling networks and save lives.’

Another 83 migrants crossed the Channel in four small boats on Friday making last week the busiest week for migrant crossings with more than 1,000 people attempting to reach the Kent and Sussex coast from France.

Sea fog has prevented crossings on Saturday and today. 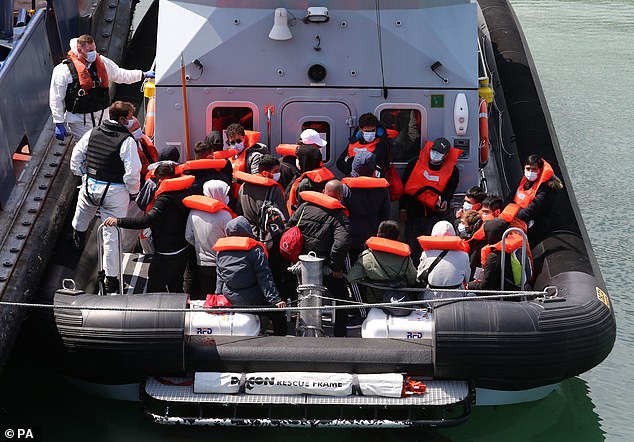 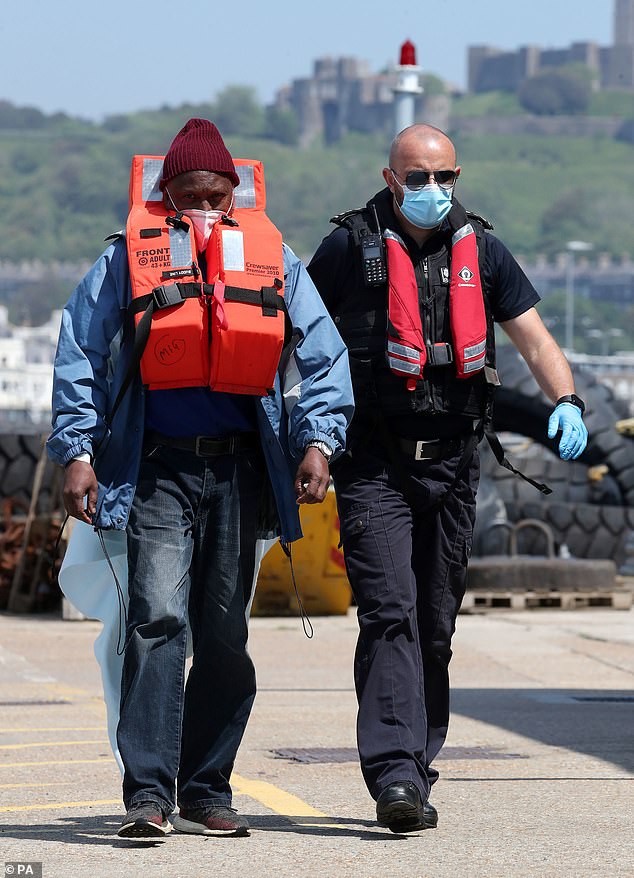 The latest figures take the total number of migrants who have crossed so far this year to 4,521

A total of 1,058 people arrived in the seven day period between May 28 and June 3, in 50 boats, according to official Home Office figures.

The busy week for Border Force began the Friday before last, May 28, when 336 migrants arrived in 19 boats setting a new daily record for the year.

They were followed by 144 in seven vessels on Saturday, May 29, 17 in one crossing on Sunday May 30, and 71 migrants in three boats on Monday May 31, completing a hectic Bank Holiday.

And that continued in the first three days of June, which saw 490 arrive in 12 boats.

It includes 132 in six boats on Tuesday June 1 and 157 more in a further six vessels on Wednesday June 2, and 201 migrants made the perilous journey in eight boats earlier on Thursday June 3.

The council says it may no longer be able to accept new UASC arrivals within days.

In a statement released today they said: ‘KCC continues to urge a strong and mandatory National Transfer Scheme and has served a formal Letter Before Action to the Home Office.

‘Following last year’s crisis, which saw vastly increased UASC numbers arriving in small boats in Kent, the Home Office and Department for Education promised to reform national systems so that Kent services would not be put under the same unreasonable strain this year.

‘In the intervening nine months, although the council welcomed government support in the transfer of some UASC out of Kent, assistance with age assessments and additional funding the substantive changes needed to the National Transfer Scheme (NTS) to prevent a repeat have not been made, and once again Kent services are at risk of being overwhelmed by the number of new UASC arrivals by boat, which already stands at 60 more children than at the same time last year.

‘Kent currently has nearly double the number of UASC children in care the government says it is safe to have.

‘KCC has now taken the first steps in legal proceedings to implement a long-term solution that will prevent this crisis from occurring again.

The Director of Children’s Services has advised the Leader that the current pace of arrivals and strain on care services is likely to mean he will no longer be able to safely accept any further new UASC arrivals in Kent before the end of this week. 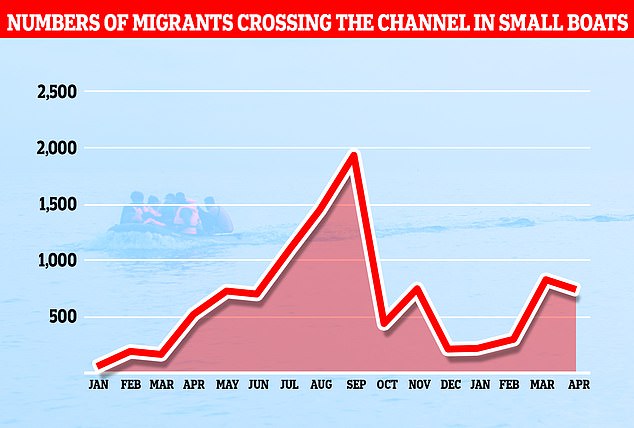 The annual total of Channel migrants arriving in the UK this year is expected to exceed the 8,400 who made the journey in 2020

KCC says Border Forces will then be asked to place new arrivals directly into other local authorities around the country from the port, as they did for three months last year.

How many migrants have arrived in recent days?

The number of migrants crossing the English Channel in small boats over each day of last week is:

Roger Gough said: ‘I am deeply saddened that we are now seeing a repeat of the same crisis of 9 months ago.

‘While there have been a number of welcome measures from government – to the benefit of the Kent council taxpayer – we have not seen what is most needed: a robust National Transfer Scheme that prevents port authorities such as Kent coming under unmanageable pressure. Over this last year we have argued consistently and repeatedly that this must be done through a mandatory system.

‘The Home Office consulted on changes to the National Transfer Scheme (NTS) in August and September last year and have yet to publish any new proposals or a response to the consultation. The scheme remains voluntary with insufficient incentive for other UK Local Authorities to transfer UASC from Kent.

‘Kent residents deserve a resolution to this issue. We still do not have one. The wholly disproportionate strain on Kent’s Children’s Services continues to be overlooked.

‘We must ensure that all UK local authorities with capacity share in the support of these children.

‘Enough is enough. A robust, long-term solution is well overdue and critical for the future welfare of all children supported by KCC, whatever their background, and the continuation of the excellent services that support them.’

Between 1 January and 1 June this year 242 UASC have arrived on Kent shores and been passed to Kent Children’s Services.

Of these, only 52 have been transferred to other local authorities under the voluntary NTS. The current scheme does not keep pace with the rate of arrivals and the burden on Kent becomes unsustainable.

KCC says this remains a small problem to solve for the nation, but a huge problem for Kent in the meantime.

They warned: ‘In the absence of any substantive Home Office response to the council’s proposal by June 17, KCC will proceed to issue a claim for Judicial Review against the Home Secretary.’