Supporters of Donald Trump have stormed the US Capitol building blocking a vote certifying Joe Biden’s US election victory on November 3. Members of the House of Representatives and the Senate have been evacuated from the building, while police have used tear gas to try and disperse the protesters.

Thousands swarmed the US capital claiming Donald Trump won the election last year and the Democrats had committed voter fraud to steal the victory from the Republicans.

Condemning the dark scenes unfolding in the US, Prime Minister Boris Johnson said: “Disgraceful scenes in US Congress.

“The United States stands for democracy around the world and it is now vital that there should be a peaceful and orderly transfer of power.”

Similar remarks were made by Labour leader Sir Keir Starmer, who described the riots as a “direct attack” on democracy. 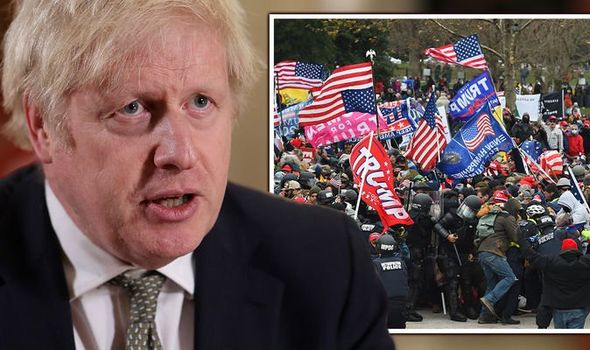 He said: “Horrendous scenes from the US.

“These are not ‘protestors’ – this a direct attack on democracy and legislators carrying out the will of the American people.”

Windows were smashed as the demonstrators stormed the state building, and flags showing support for the White House incumbent were draped down the walls.

Ahead of the chaotic scenes Mr Trump told his supporters to march on the Capitol.

Addressing a rally this afternoon he said: “You don’t concede when there’s theft involved.

“Our country has had enough and we will not take it any more.”

END_OF_DOCUMENT_TOKEN_TO_BE_REPLACED

END_OF_DOCUMENT_TOKEN_TO_BE_REPLACED
Recent Posts
We and our partners use cookies on this site to improve our service, perform analytics, personalize advertising, measure advertising performance, and remember website preferences.Ok