The Rock’s status was not covered in the trade agreement reached by Boris Johnson on Christmas Eve, prompting concerns about what would happen when the transition period ends at 11pm.

The British Overseas Territory, whose sovereignty is disputed by Madrid, will remain subject to the rules of the free-travel Schengen area, Spain’s foreign minister said.

Arancha Gonzalez Laya announced that the ‘agreement in principle’ means people in Gibraltar ‘can breathe a sigh of relief’.

She said that further details on the agreement would be published in the New Year.

A lot was riding on the outcome for Gibraltar, which needs access to the EU market for its economy. The territory is home to around 34,000 people.

They faced the possibility of entering the new year with tight new controls on what for decades has been an open border with the Spanish city of La Línea de la Concepción. 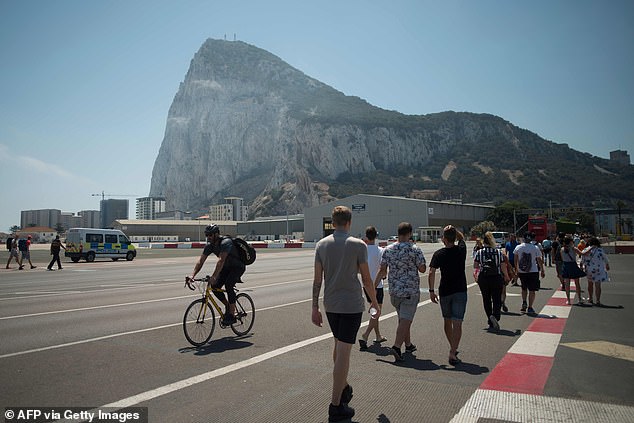 A lot was riding on the outcome for Gibraltar, which needs access to the EU market for its economy. The territory is home to around 34,000 people

More than 15,000 people live in Spain and work in Gibraltar, making up about 50 per cent of its labour market.

In the Brexit referendum, 96 per cent of voters in Gibraltar supported remaining in the EU.

Foreign Secretary Dominic Raab said: ‘Today, working side by side with the chief minister of Gibraltar, and following intensive discussions with the Spanish government, we reached agreement on a political framework to form the basis of a separate treaty between the UK and the EU regarding Gibraltar.

‘We will now send this to the European Commission, in order to initiate negotiations on the formal treaty.

‘In the meantime, all sides are committed to mitigating the effects of the end of the transition period on Gibraltar, and in particular ensure border fluidity, which is clearly in the best interests of the people living on both sides.

‘We remain steadfast in our support for Gibraltar and its sovereignty. I am grateful to foreign minister Laya and her team for their positive and constructive approach.

‘We have a warm and strong relationship with Spain, and we look forward to building on it in 2021.’

What is the Schengen Zone?

The Schengen zone is an area made up of 26 European countries, of which the UK is not one, that have officially abolished all passport and all other types of border control at their mutual borders.

It enables every EU citizen to travel, work and live in any EU country without special formalities.

Originally, the concept of free movement was to enable the European working population to freely travel and settle in any EU State, but it fell short of abolishing border controls within the Union.

A break-through came in 1985 when cooperation between individual governments led to the signing, in Schengen (a small village in Luxembourg), of the agreement on the gradual abolition of checks at common borders, followed by the signing in 1990 of the convention implementing that agreement.

The implementation of the Schengen Agreements started in 1995, initially involving seven EU states.

Born as an intergovernmental initiative, the developments brought about by the Schengen Agreements have now been incorporated into the body of rules governing the EU.

END_OF_DOCUMENT_TOKEN_TO_BE_REPLACED

END_OF_DOCUMENT_TOKEN_TO_BE_REPLACED
Recent Posts
We and our partners use cookies on this site to improve our service, perform analytics, personalize advertising, measure advertising performance, and remember website preferences.Ok