Catholic bishops backflip on status of women in Church, giving hope to reformers

Australia’s Catholic bishops have agreed to work to elevate the status of women in the Church – including by potentially serving in the ministry as deacons – after a major gathering plunged into chaos over the issue last week.

The schedule for the church’s fifth plenary council, a powerful policymaking event, was suspended after two motions affirming women’s role in the Church failed to pass, prompting about 60 participants to stage a silent protest. 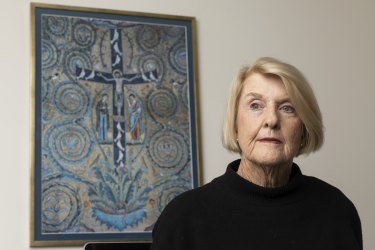 Marilyn Hatton, a Catholic feminist, said she was glad the Church recognised it needs to do more to promote the role of women. Credit:Alex Ellinghausen

Catholic leaders acknowledged the failure to pass the motions had damaged the Church’s reputation, creating the impression its leadership was indifferent to the concerns of female churchgoers.

After the motions were slightly redrafted, the plenary council voted overwhelmingly that each Catholic diocese in Australia should commit to creating “new opportunities for women to participate in ministries that engage with the most important aspects of diocesan and parish life”.

The participants – including 37 of 43 bishops – supported a motion saying the Church would examine how to best allow women to serve as deacons if such a move is approved by the Vatican.

Pope Francis has launched a commission examining whether Catholic women should be able to serve as deacons.

Deacons are ordained ministers who do not intend to become priests but can conduct baptisms, witness marriages, perform funeral and burial services outside of Mass, and distribute Holy Communion.

Women are allowed to serve as Anglican deacons in most dioceses in Australia, but not in the Catholic Church.

The council also passed a motion committing the Church to ensure that “the experiences and perspectives of women, including women who exercise ministry, are heard, considered and valued at local, diocesan and national levels”.

Voters also backed a motion calling for the Church in Australia to act “in ways that witness clearly to the equal dignity of women” by “overcoming assumptions, culture, practices, and language that lead to inequality”.

Plenary council vice president Shane Mackinlay said the Church had averted disaster by agreeing to the reworded motions, saying: “I believe in time we will look back on this as an extremely significant event in the life of the Church in Australia”.

Mackinlay – the Bishop of Sandhurst, which covers the Bendigo region in Victoria – said the initial failure of the motions was a “terrible look” for the Church.

“It was perceived as a rejection of the legitimate concerns women and men in the Church have had for so long,” he said.

Mackinlay said there was a “great sense of celebration” the motions eventually passed, but participants were “emotionally exhausted” by the drama of the week.

“After a negative experience, that damage is never completely undone,” he said.

John Warhurst, a prominent advocate of church reform, said: “This must be seen as an encouraging step forward from a group of men who wield ultimate power in the church and have resisted any effective recognition of ministries for women in the past.

“Now we have some hope that the Australian Church can move towards meeting the ideal of gender equality accepted in other parts of society,” Warhurst, the chair of Concerned Catholics of Canberra Goulburn, said.

Marilyn Hatton, a Catholic feminist, said she was delighted the Church had recognised it needs to make improvements on gender equality.

But she was disappointed the motion on female deacons had been “watered down”, saying: “It would be much better if our bishops were on the front foot on this issue”.

Maeve Louise Heaney, director of the Xavier Centre for Theological Formation at Australian Catholic University, said she was hopeful the council would mark a turning point for the church.

“It was very tough, we all came out of the week bruised,” she said.

She said she believed the final approved motions were superior to those that originally failed to attract enough votes from the nation’s bishops.