Home » World News » Census and the city: Inner Sydney’s wealth is wildly outside the Australian norm

Things are a different in Sydney. The national census, released last week, showed the city is younger, more religious and more culturally diverse than Australia as a whole. The pay packets are bigger as well – Sydney’s median family income was $13,000 a year higher than the national figure (the median being the midpoint of all incomes). 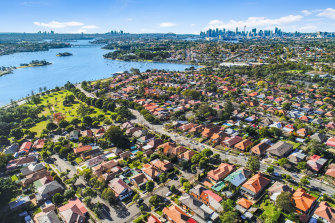 The 2021 census provides a snapshot of Sydney’s regions

But when it comes to incomes and housing, one city region is strikingly similar to the rest of Australia: western Sydney.

The median family income in the Blacktown district, in the heart of Sydney’s west, was $2,252 a week, just a little higher than the national figure of $2120. The Outer West and Blue Mountains, Outer South West and Parramatta districts also had family incomes close that the national marker.

The character of housing in western Sydney broadly matches the Australian norm. Just over 72 per cent of the national population lives in a standalone house; the share across much of western Sydney is around 80 per cent.

The real outlier is inner Sydney, a region which includes suburbs east of an arc stretching from the airport to Strathfield then northeast to Palm Beach.

In Castle Cove-Northbridge and Greenwich-Riverview the median family income hit $241,000 a year (remember, being a median figure that means half the residents had a family income higher than that). The suburbs of Balgowlah-Clontarf-Seaforth, Hunters Hill-Woolwich and Bellevue Hill were not far behind.

Inner Sydney’s eye watering property values means its borrowers have much bigger mortgages than elsewhere. The region’s median monthly mortgage repayment was almost $3,000 which is $1100 more than the typical Australian mortgagee. In Hunters Hill-Woolwich and Castle Cove-Northbridge median monthly mortgage repayments reached $4,333, or $52,000 a year.

Phillip O’Neill, professor of economic geography at Western Sydney University, said inner Sydney benefits from a “massive” concentration of well-paid knowledge industry jobs in finance, professional services and IT. These industries have thrived in job hubs near Sydney Harbour since the deregulation of the Australian economy in the 1980s.

“It has been one of the great wealth success stories across the globe,” said O’Neill. “If you put just about any city in the world up alongside eastern Sydney it’s going to look a bit shabby.”

Alison Holloway an urban planning expert with the consultancy SGS Economics and Planning said the economy of inner Sydney has become highly integrated with the world economy.

“Those communities have access to jobs that are globally connected, and they attract higher wages,” she said.

But O’Neill warns that high concentration of well-paid jobs in one region is a source of citywide inequality because those in other parts of the city are forced into long commutes to access them.

“It makes a hell of a difference not to have to commute to that job from Western Sydney,” he said.

The character of the housing in inner Sydney also stands out. More than half of the dwellings in that part of the city is now flats or apartments compared to 31 per cent across Greater Sydney and 14 per cent nationally.

In the statistical district called City and Inner South, which stretches south from the CBD to Alexandria and Mascot, 70 per cent of the dwellings are now flats and apartments. In the Eastern Suburbs that share has reached 58 per cent on Sydney’s North Shore 46 per cent.

A lot of high density housing is occupied by renters – 41 per cent of those living in inner Sydney are tenants, well above the national share of 31 per cent.

Sydney also leads the way for high-rise living. The census showed 247,000 people in the city now resides in a building of nine stories or more, almost half of all Australians living in that building type. Sydney City Council alone has nearly 70,000 high-rise residents.

And the higher density trend is spreading west. The census showed apartments and flats now make up more than a third of dwellings in the Inner South West statistical district, which takes in Punchbowl, Bankstown and Hurstville. In the suburb of Rhodes, about 16 kilometres west of Sydney’s CBD, 95 per cent of the population lives in an apartment of flat.

Terry Rawnsley, a demographer and urban economist at KPMG, says the high cost of land near Sydney’s job hubs, beaches, waterways and transport corridors suggests the shift to higher density will intensify.

“When you’ve got high incomes and high demand those high-rise developments become more feasible because there’s lots of people wanting to locate there,” he said.

“It becomes a self-fulfilling cycle where you have more workers, more businesses wanting to hire more people and deepening labour markets for them to choose from.”

The median age in Greater Sydney was 37, a year less than Australia as a whole. The share of city residents born overseas has reached 39 per cent, 2 percentage points higher than 2016. Sydneysiders are also more devout than their fellow Australians. Only 30.3 per cent of the city’s population described themselves as having no religion on census night last August compared with 38.4 per cent nationally. In Hobart, that share was almost 50 per cent.

But the census also drew attention to huge income discrepancies across the city. The median family income in the eastern suburbs ($177,000) was $81,000 a year more than in city’s South West statistical district ($96,000) which takes in Liverpool, Fairfield and Bringelly. Suburb-level comparisons were starker. In Hunters Hill-Woolwich the median family income was $239,000 a year, while only 25 kilometres south-west in Cabramatta-Lansvale the figure was 68,000.

Most of Sydney’s lowest-income suburbs are located a long distance from major job hubs. This limits employment opportunities for people in those neighbourhoods.

Holloway warns the disparities in income and opportunity pose a major challenge.

“It is a big risk for the city,” she said. “Because large groups in the community could be left behind.”