Centuries on, the relevance of Dante’s Divine Comedy remains

“Abandon all hope, ye who enter here,” reads the sign at the entrance to hell in Dante’s Divine Comedy (readers of my columns might be familiar with the feeling). That line is surely the most famous of one of the most famous and influential literary works in history.

Tomorrow is the 700th anniversary of Dante Alighieri’s death, his remains interred in Ravenna because he died in exile from his beloved Florence. I have joined what is touted as the world’s biggest reading group, to investigate and appreciate his extraordinary poem. 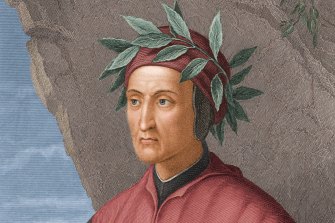 Run by Baylor University in the US, the program will provide videos and discussion three times a week until the 100 cantos – an introductory canto, then 33 in each of the book’s three parts, Hell, Purgatory and Paradise – are finished next Easter. Just before it opened last Wednesday, it already had 8000 participants.

Comedy in the medieval world meant a happy ending. The Divine Comedy tells the spiritual journey through life, of Dante and all of us – in the very first line he talks of how “midway on our path of life … I found myself searching”. He comes to understand sin, how it divides people and corrupts us, separating us from God.

Much of the poem is hard to understand because it has so many references to 13th-century Florentine politics and people, which is why a guide is so helpful.

Yet despite its undoubted difficulties, The Divine Comedy has spread its influence through Western civilisation. The first such poem written in the vernacular (as opposed to Latin), it established Italian as a national language, much as Shakespeare helped solidify English. It also merged classical and Christian themes, and combined the specific and the universal with great elegance. 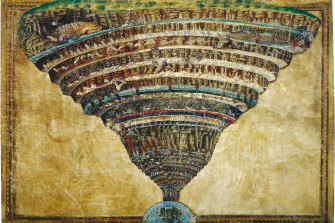 Botticelli painted this parchment map of the nine circles of Hell having read Dante’s Divine Comedy in the 1480s.

The poem inspired writers such as James Joyce, T.S. Eliot and Oscar Wilde, and artists from Botticelli to Dali, who drew an illustration for each of the 100 cantos. It most famously stuck in the psyche of Michelangelo in his depiction of the last judgment on the Sistine Chapel wall.

Its themes are reminiscent of the great Puritan allegory The Pilgrim’s Progress, which John Bunyan wrote while imprisoned for his conscience. But it speaks more easily to an age where people are spiritual but not religious. 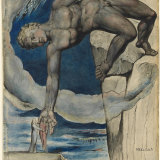 A 19th-century depiction of a scene from the poem where the giant Antaeus sets Dante and the Roman poet Virgil down in the last circle of Hell.Credit:Felton Bequest, National Gallery of Victoria

Why should we read The Divine Comedy today? Because, in the words of a Baylor University professor, “it will make your life better”. It promotes self-awareness and sets your sights on heaven or at least, as people might say today, a mindful life.

It’s astounding how many people say they have found The Divine Comedy life-changing. I’m confidently expecting it to make me even more wise, noble and humble.

Find the reading group at 100daysofdante.com.

Barney Zwartz is a senior fellow of the Centre for Public Christianity.