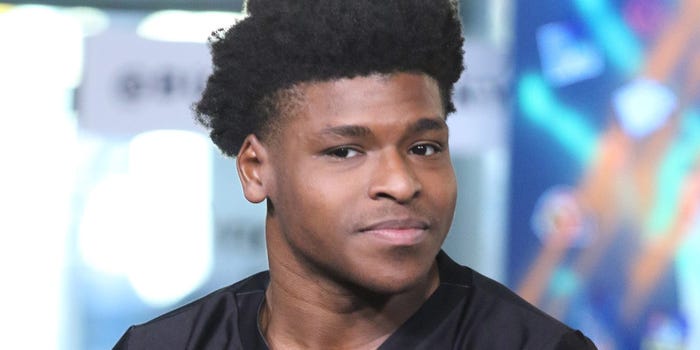 Jerry Harris, the breakout star of Netflix's "Cheer," has pleaded not guilty to federal child pornography charges and allegations that he solicited sex from minors.

The latest development in 21-year-old Harris' criminal case comes after he was arrested outside his Naperville, Illinois, home on September 17. He was taken into custody by FBI agents on one count of producing child pornography and has remained in custody.

One month later, federal prosecutors alleged in an indictment that Harris "exploited and violated" at least five to 10 minors, as well as sexually assaulted a 15-year-old boy.

Court documents viewed by Insider showed Harris entered a not guilty plea to all seven counts on December 17 at an arraignment hearing he attended via telephone.

Harris first made headlines in January after he appeared in the Netflix reality series, "Cheer," which followed the Navarro College cheerleading squad's journey to the National Cheerleading Championship held each year in Daytona Beach, Florida.

He quickly emerged as a fan favorite for his "mat talk," and had just begun parlaying his cheerleading career into larger opportunities. In February, he interviewed several celebrities while acting as an Oscars correspondent for The Ellen DeGeneres Show.

An indictment filed earlier this month and reported by CNN alleged that Harris persuaded a minor "to engage in sexually explicit conduct for the purpose of producing a visual depiction of such conduct."

The charges referred to alleged interactions with four minors between August 2017 and August 2020 in Illinois, Florida, and Texas.

One charge said Harris traveled from Texas to Florida with the intention of engaging in sexual acts with a 15-year-old at a cheerleading competition in May 2019.

The US Attorney's Office alleged that Harris sexually assaulted the minor, saying Harris "followed him into the bathroom and sodomized the boy, court documents said.

"Harris' sexual assault of this boy in such a public place, in an unlocked public bathroom, during an event attended by dozens of responsible adults demonstrates that Harris either does not care about being caught committing his offenses, or simply cannot stop himself," the court document said.

Harris' arrest came after 14-year-old twin brothers accused him of sexual abuse and filed a complaint.

In the USA Today report, Charlie and Sam claimed they were 13 years old when they first encountered Harris, then 19, in 2018.

The complaint and report alleged that Harris solicited child pornography images and videos from the brothers on several occasions.

"It was just eating me alive," Charlie told USA Today. "It was just making me so gross and uncomfortable. Every time I saw his name or something like that, I was just cringing about it."

Harris has remained in the Metropolitan Correctional Center in Chicago without bond. An official trial date has not been set.

Harris' lawyers have requested that he be released while awaiting trial.

In October, Harris' lawyers argued that the "nature and circumstances of the offense" is not "persuasive enough to merit" his detainment, court documents said.

Attorney Todd Pugh also asked the court to consider the "weight of the evidence" against Harris and his "history and characteristics."

Pugh's motion added that Harris lost his mother to lung cancer, became homeless after the motel he lived at was shut down, and was "relentlessly ridiculed, mocked, and bullied" in high school.

"It is important to recognize, however, that Mr. Harris had barely reached the age of majority when the purported criminal conduct occurred," Pugh said in the October filing.

Justice Heather McShane in October declined to issue a ruling on whether Harris will remain in custody or be given bail.

END_OF_DOCUMENT_TOKEN_TO_BE_REPLACED

END_OF_DOCUMENT_TOKEN_TO_BE_REPLACED
Recent Posts
We and our partners use cookies on this site to improve our service, perform analytics, personalize advertising, measure advertising performance, and remember website preferences.Ok