Authorities in Chicago on Friday released graphic video footage from a March 25 shooting in the city’s Brighton Park neighborhood that left a suspect dead and a police officer wounded.

The footage is from the bodycams worn by responding officers, including one who suffered a gunshot wound, FOX 32 of Chicago reported.

Police had responded to the area on a call about gunfire at a Home Depot store in the area. They later claimed that the suspect, identified as Trevon Chadwell, 18, had shot a security guard in the head, then later shot a police officer in a shoulder during a chase.

The security guard, identified as Kevin Lockett, survived the shooting and was progressing in rehabilitation efforts in a hospital, family members told WLS-TV of Chicago.

In one video clip, officers are heard inside their patrol car as they arrive in the area. 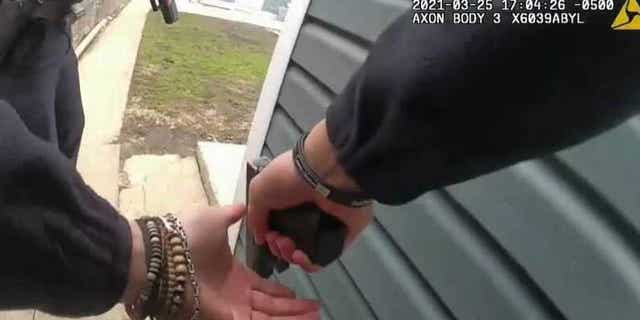 A Chicago police officer is seen with weapon in hand during the pursuit of a suspect in an image captured from a bodycam video.

“He’s running, he’s running. Let’s go get him,” one officer is heard saying after spotting the suspect.

The officer then exits the car, runs down an alley, opens a gate – and is quickly shot by the suspect, who is seen a short distance away.

A radio call is made for an ambulance and the partner is seen in another video, dragging the wounded officer to a safer area.

Other graphic videos show other officers arriving at the scene, tracking down the suspect and killing him in a shootout, with a large pool of blood seen near his body.

The wounded Chicago police officer was the fourth from the city’s force to be shot this year, FOX 32 reported.