Beijing: China has said it is pulling ahead in what could be the final leg of the global coronavirus vaccine race, with four of seven possible candidates in last stage human trials – more than any other country.

However, some are concerned about the quality of the vaccines and that they are being used to gain political leverage. Beijing is so confident of its inoculations that authorities have been administering vaccines for more than a month before clinical studies conclude, authorities revealed last week. 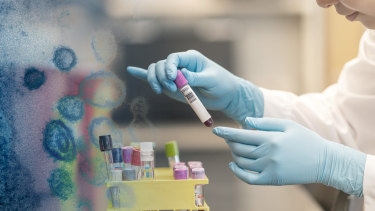 The initial announcement of a vaccine will primarily be a political event.

People deemed at higher risk of infection, such as border officials and state-owned enterprise employees working overseas, have received jabs, after the government approved them for emergency use, according to state media. Soon, transport and service workers are expected to be vaccinated.

"Giving untested vaccines means that there is no guarantee that they are going to work, so people could wrongly assume that they are inoculated when they are not," said Nicholas Thomas, a health security expert and professor at the City University of Hong Kong.

"In doing so, they could engage in behaviour that has a higher risk…[and] unwittingly put other people at risk.

"The reason why vaccines go through phase 3 trials is to reduce the short and long-term risk to the individual," he said. "Giving vaccine shots without this knowledge places individuals at significant personal risk." 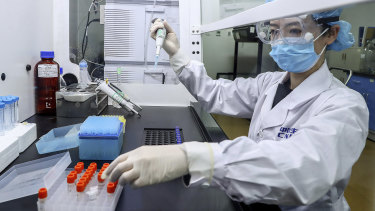 The world watches as China develops a COVID-19 vaccine.Credit:AP

The Chinese government has provided sparse details on which vaccines are being given to people, and how many have been vaccinated, leading to concerns participation may be forced and not voluntary.

Last week, Papua New Guinea cancelled a flight from China filled with arriving passengers believed to have received a coronavirus vaccine over worries of the unknown health impact to the local population.

In general, "it's better for a community if there's more people vaccinated, so there's less risk of an outbreak of COVID," said Ben Cowling, division head of epidemiology and biostatistics at Hong Kong University's School of Public Health.

"At the same time, just having some vaccinated people wouldn't be enough to mean that social distancing could be relaxed."

Governments are under increasing pressure to find a lasting solution for the pandemic that has killed more than 840,000 people.

For China, coming up with a successful vaccine would help to deflect anger at home and abroad over its pandemic cover-up, while delivering a blow to Donald Trump's "warp-speed" plans for a vaccine. Competition is heating up as well with Russia.

The Chinese government "sees science and technology as tools of national greatness," said Yangyang Cheng, a scientist at Cornell University.

Winning the vaccine race would underscore government propaganda about how "it's really a hostile world out there, and we, as in the Chinese people, have to rely on ourselves".

It would also give China a new tool for diplomacy and potentially bring more allies into the fold.

Beijing has already vowed "to give priority" to a number of South-east Asian nations – the Philippines, Cambodia, Laos, Myanmar, Thailand and Vietnam – if it develops a vaccine.

Whether the world will trust a Chinese vaccine remains to be seen.

If early inoculations in China end up failing, experts say that could impact global public confidence in the efficacy of coronavirus vaccines in general.

While drug regulators have the power to decide whether or not to approve a Chinese vaccine for use in their own countries, they could come under pressure to fast-track a successful candidate on the market, regardless of who developed the treatment.

END_OF_DOCUMENT_TOKEN_TO_BE_REPLACED

END_OF_DOCUMENT_TOKEN_TO_BE_REPLACED
Recent Posts
We and our partners use cookies on this site to improve our service, perform analytics, personalize advertising, measure advertising performance, and remember website preferences.Ok