Beijing: Hong Kong police has launched a hotline to report behaviour suspected of breaching national security as Chinese authorities continue to crack down on dissent in the territory.

Residents are being invited to share intelligence via a range of platforms, including text message, email and WeChat, the social media app.

The dobbing system has reminded some residents of China's Cultural Revolution in which turning in friends and family meant proof of allegiance to the Communist Party.

Tips submitted via the hotline can include photos and audio or video clips. 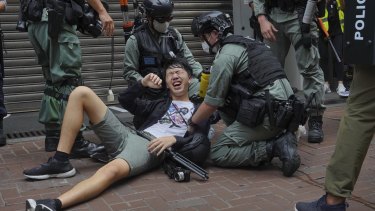 A reporter falls after being sprayed with pepper spray by police during a protest in Hong Kong in July.Credit:AP

The hotline comes four months after the central government in Beijing imposed a sweeping national security law on the territory after mass pro-democracy protests in the city last year.

Despite assurances that it would only target a "tiny minority", the measure's wording has outlawed a host of peaceful political views.

The law criminalises any act deemed to constitute secession, subversion, terrorism or foreign collusion, with those convicted facing anything up to life imprisonment.

Western nations including the UK and the United States have widely condemned the law for breaching the Sino-British Joint Declaration, a treaty meant to guarantee Hong Kong's freedoms for at least 50 years after the former British colony was returned to Beijing in 1997.

The hotline quickly attracted hundreds of comments, with some coming out in favour of the initiative. 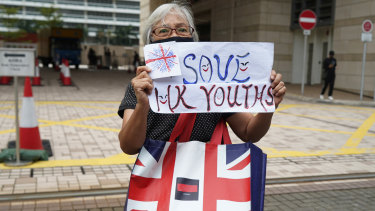 Activist Alexandra Wong chants a placard reading “Save Hong Kong Youths” outside a court, in Hong Kong in October after an activist was charged under the new law.Credit:AP

"The Hong Kong police bring justice," wrote one. "Support Hong Kong police support the national security law," posted another. Others were more critical, with one person comparing it with China's Cultural Revolution in which proving allegiance to the ruling Communist Party meant turning in close friends and family to the authorities. The veracity of the accounts posting comments could not be verified.

END_OF_DOCUMENT_TOKEN_TO_BE_REPLACED

END_OF_DOCUMENT_TOKEN_TO_BE_REPLACED
Recent Posts
We and our partners use cookies on this site to improve our service, perform analytics, personalize advertising, measure advertising performance, and remember website preferences.Ok