Chinese state media has warned that ‘[we] will have little choice but to take Taiwan to the battlefield’ after the island’s president vowed to resist ‘threats’ from Beijing.

The Global Times newspaper issued the threat on Sunday, in the wake of a speech by Taiwan’s president Tsai Ing-wen in which she vowed to resist pressure from Beijing to ‘reunify’ the island.

Quoting from ‘experts’ within China, the paper accused ‘secessionist’ Tsai of stirring up tensions while warning that ‘resisting reunification by force will only bring doom more quickly.’ 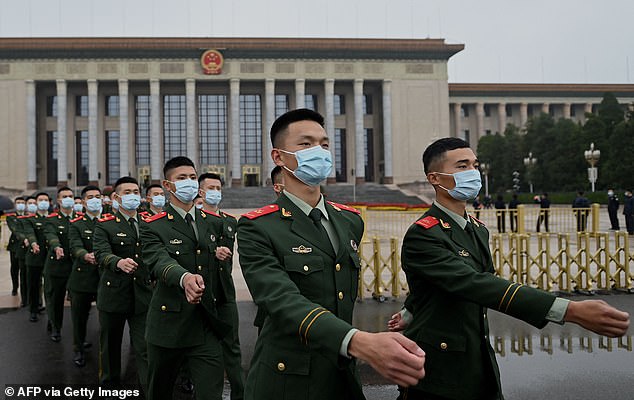 China’s state media has warned it ‘will have no choice but to take to the battlefield’ against Taiwan if its leaders do not stop their ‘provocations’ (file image, Chinese military officers)

Tsai’s speech was ‘filled with resentment against the Chinese mainland’ because she suggested it is ‘an enemy state’, Zhang Wensheng of Xiamen University said.

Presenting Taiwan as a bastion of democracy against authoritarian China is ‘a complete provocation’, Zhang added.

‘If [Tsai] continues such provocative acts, the mainland will have no choice but take it to the battlefield,’ he warned.

The same editorial, one of two published after Tsai’s speech, also quoted another anonymous ‘military expert’ who spoke of the ‘obvious advantages’ that Beijing’s army has over the island’s armed forces.

‘Resisting reunification by force will only bring doom more quickly to Taiwan secessionists,’ they added.

It is just the latest threat that Beijing’s media has made to Taiwan, after warning in recent weeks that World War Three could be sparked ‘at any time’.

Taiwan views itself as an independent country – the Republic of China – but Beijing views it as a breakaway province and has vowed to ‘reunify’ it with the mainland using force if necessary.

Tensions around the island have ratcheted up in recent weeks as Beijing flies dozens of military jets close by and state media warns of World War Three being sparked.

Meanwhile the US – long an ally of Taiwan – has formed fresh alliances in the Pacific to push back against Beijing, including the AUKUS pact with Britain and Australia.

Amidst those rising tensions, Taiwan held its annual National Day celebrations on Sunday which feature a military parade.

Included in the parade was a fly-past by Taiwanese jets, along with columns of armoured vehicles and a display of missiles.

Tsai also delivered an address at the event, vowing not to bow to pressure by Beijing and to defend the island’s democratic way of life.

‘The more we achieve, the greater the pressure we face from China,’ Tsai said, adding that: ‘Nobody can force Taiwan to take the path China has laid out for us.’

The president added: ‘We hope for an easing of… relations (with Beijing) and will not act rashly, but there should be absolutely no illusions that the Taiwanese people will bow to pressure.’

State media accused Tsai of ‘betraying’ history in her speech, while ‘colluding’ with foreign forces to achieve ‘succession’.

‘The island of Taiwan will finally be reunified with the Chinese mainland.’ 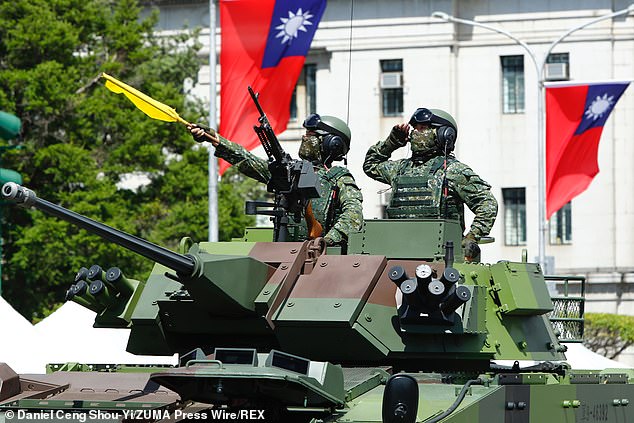 Taiwan views itself as an independent state – the Republic of China – while China views it as a breakaway province (pictured, Taiwanese soldiers on parade on Sunday)

President Xi Jinping gave his own speech in advance of Tsai’s address on Saturday, saying that reunification ‘must be realised, and will definitely be realised.’

He insisted that ‘peaceful reunification’ remains his aim, but in the past he has said that he reserves the right to use force.

Xi was speaking at an official celebration in Beijing’s Great Hall of the People that focused largely on the need for the ruling Communist Party to continue to rule.

Polling shows the vast majority of Taiwanese have no desire to be ruled by Beijing.

Most favour maintaining the status quo although there is a growing Taiwanese nationalist sentiment, especially among younger people.

China’s crackdown in Hong Kong, a city Beijing said would be a model for how it would rule Taiwan, has also done little to endear Taiwanese to assurances that their way of life would continue under communist party rule.

Taiwan and China split in 1949 amid civil war, with the then-ruling Nationalist Party fleeing to the island as Mao Zedong’s Communists swept to power on the mainland.

The Nationalists had led the country since ending China’s last monarchy in the 1911 Revolution, establishing the Republic of China.

For three decades, the US recognised the government in Taiwan as the legitimate rulers of the whole of China until Jimmy Carter established formal relations with the Communists in 1979.

That move was followed by a bill from Congress that granted Taiwan near-nation status and committed the US to selling the island weapons to defend itself. The two still maintain strong ties.

America has a long-standing policy of ‘strategic ambiguity’ towards Taiwan, refusing to say what it would do if the island is attacked.

Joe Biden recently suggested that he would be willing to go to war in the event of an invasion, though aides insisted he had misspoke.