Christmas 1918: How Americans celebrated the holiday season during the last pandemic 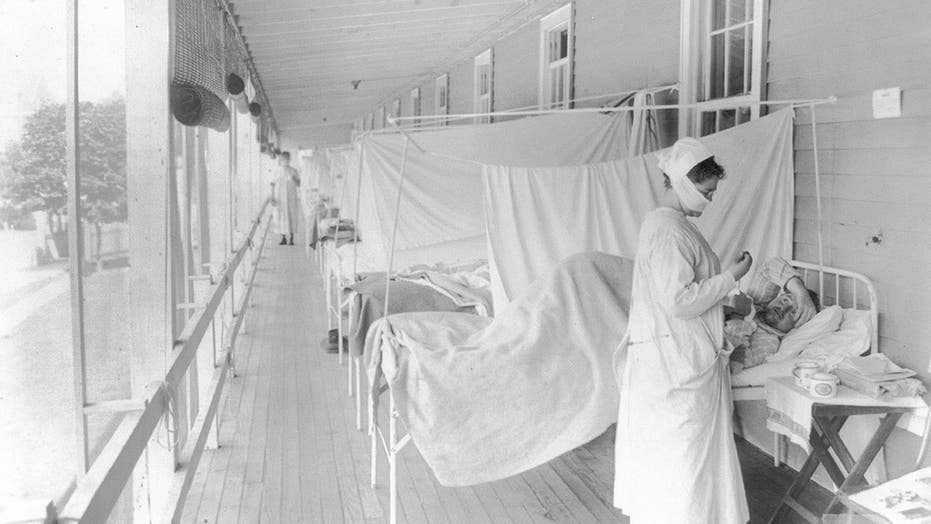 Americans celebrated Christmas over a century ago during the previous pandemic with some of the same concerns of the modern day, including considering whether to gather with loved ones and risk deadly infection.

But in 1918, World War I had just ended and many soldiers were headed home for the holidays to see family. And with the federal government less prominent than it is today, and the advent of the U.S. Centers for Disease Control and Prevention (CDC) in 1946 still decades away, states, and more so local municipalities, implemented varying restrictions across the country.

AMERICA RELEARNING THE LESSONS OF THE 1918 SPANISH FLU PANDEMIC

The second wave of the so-called Spanish flu spiked in the U.S. in November, but the pandemic was far from over, and a third wave would reach U.S. cities the following year. Still, Armistice Day on Nov. 11 brought cause for celebration — and some people complained that churches were closed while saloons remained open, according to Smithsonian Magazine.

In Milwaukee, Wis., which was home to deeply observant German and Norwegian immigrant populations at the time, residents complained that churches were shut down during Advent, and churches were allowed to hold services for a special exception on Christmas Day.

In the Dec. 21, 1918, issue of the Ohio State Journal, the state’s acting health commissioner cautioned people to "beware the mistletoe," recommending a "kissless holiday" for flu fighters. He also warned against attending parties or gatherings, given the risk of bringing infections home to family.

"You will show your love for dad and mother, brother, sister and the rest of ‘em best this year by sticking to your own home instead of paying annual Christmas visits, holding family reunions, and parties generally," the commissioner said at the time. "It goes against everything we love to do to not celebrate the holiday season … And we must nevertheless not do it. It makes me sad to say it." 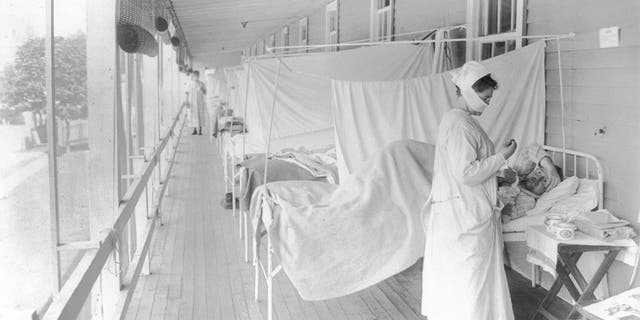 In this November 1918 photo made available by the Library of Congress, a nurse takes the pulse of a patient in the influenza ward of the Walter Reed hospital in Washington. In 1918, tens of thousands of U.S. soldiers died in World War I and hundreds of thousands of Americans died in a flu pandemic. Deaths rose 46% that year, compared with 1917. (Harris &amp; Ewing/Library of Congress via AP, File)
(AP)

Influenza Encyclopedia, a project edited by historian Howard Markel and produced by the University of Michigan Center for the History of Medicine, compiled century-old newspaper clippings that provide insight into what life was like for Americans then.

On Christmas Eve, the Nebraska State Board of Health categorized Spanish influenza as a "quarantinable disease," according to the Dec. 24, 1918, issue of the Omaha Daily Bee. In Omaha, at least 500 homes were quarantined and none of the people who lived in a house where there was even one case of flu were permitted to go out "until four days after the fever has gone down."

"Big blue cards are now being printed to be tacked on the houses in place of the present 'voluntary' cards which merely signify danger," the newspaper wrote. "A fine of $15 to $100 is provided for any violation of the quarantine order.

The country’s population was much smaller than it is now — just 103.2 million people lived in the U.S. in 1918, compared to the roughly 328.2 million today. And the Spanish flu would kill an estimated 675,000 people in the U.S before the pandemic finally subsided in 1919. It killed about 50 million people worldwide, and nearly one-third of the world population at the time became infected.

"With no vaccine to protect against influenza infection and no antibiotics to treat secondary bacterial infections that can be associated with influenza infections, control efforts worldwide were limited to non-pharmaceutical interventions such as isolation, quarantine, good personal hygiene, use of disinfectants, and limitations of public gatherings, which were applied unevenly," according to the CDC.

During that time period, many American families could relate to losing a child from diphtheria or watching a loved one suffer from polio, so more people generally were willing to comply with directions from public health departments whose officers sometimes wore badges and had police powers. In some circumstances, officials had the power to forcibly quarantine you or put you in a quarantine station on an island, according to Smithsonian Magazine.

More than 116,000 Americans lost their lives during World War I, many of whom died after contracting influenza. But with men returning from the European battlefields and other military bases, there was an overall sense of euphoria in the country after a victory for democracy over authoritarianism. 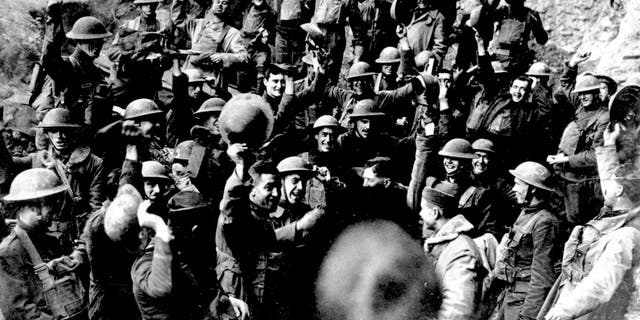 American troops cheer after hearing the news that the Armistice has been signed, ending World War I in November 1918. They are located on the front northeast of St. Mihiel, France. Similar celebrations took place all along the line where the Americans were engaged in an offensive. (AP photo)

In the Dec. 12, 1918, issue of the Boston Globe, the Boston Health Department warned against gathering for the holidays after seeing a spike in cases after Victory Day crowds and Thanksgiving.

Even in San Francisco, which was known for one of the worst outbreaks, and the most stringent restrictions, people flooded into the streets to celebrate the Armistice on Nov. 11, which came toward the end of a citywide mask mandate meant to curb transmission. When cases began to spike again over Christmastime, city officials wanted to implement the mandate but people resisted.

Suffering sizeable economic losses, businesses were eager for the anticipated Christmas shopping rush — though the tone and restrictions on such activities varied from place to place.

For example, the Dec. 20, 1918, issue of the Spokesman-Review published in Spokane, Wash., warned that the city health office would have an inspector sworn in by the city but paid for by the store to ensure shoppers wouldn’t crowd the aisles. That contrasts with the Dec. 21, 1918, issue of the Salt Lake Tribune that encouraged shoppers to patronize stores after the "great thrift and economy" practiced during the past year.

"We can all afford to let out a few links at this season of the year. The Lord has prospered us as a nation, and we do not need to pinch and scrape and lock up both purse and heart during the holidays. But let us not forget that the Red Cross needs money with which to carry on its great work," the issue said.

Though diary entries show that people still mourned the loss of traditional celebrations, they more likely did not miss close relatives, as it was more commonplace then for extended families to live close by or in the same household — compared to today when more Americans live far from their hometowns.

END_OF_DOCUMENT_TOKEN_TO_BE_REPLACED

END_OF_DOCUMENT_TOKEN_TO_BE_REPLACED
Recent Posts
We and our partners use cookies on this site to improve our service, perform analytics, personalize advertising, measure advertising performance, and remember website preferences.Ok