Miami: Leaders of a business masquerading as a church sold a toxic bleach solution as a religious sacrament and marketed it as a “miracle” cure for COVID-19, cancer, autism, Alzheimer’s disease and more, US prosecutors said.

A federal grand jury in Miami has indicted Mark Grenon, 62, and his three sons, Jonathan Grenon, 34; Jordan Grenon, 26; and Joseph Grenon, 32; all of Bradenton, Florida. Prosecutors said that they violated court orders and fraudulently produced and sold more than $US1 million ($1.3 million) of their “Miracle Mineral Solution,” a dangerous industrial bleach solution. 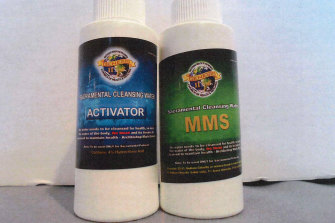 The solution contains sodium chlorite and water. When it is ingested orally, it becomes chlorine dioxide, a strong bleach used in industrial water treatments and in bleaching textiles, pulp or paper, the US Attorney’s Office for the Southern District of Florida said.

The federal Food and Drug Administration warned last year that the product the men were accused of marketing through the Genesis II Church of Health and Healing was “unproven and potentially harmful”.

“Despite a previous warning, the Genesis II Church of Healing has continued to actively place consumers at risk by peddling potentially dangerous and unapproved chlorine dioxide products,” Stephen Hahn said last year, when he was the FDA commissioner.

The Grenons relied on a book, radio station and newsletter and cited Bible verses to market the solution to vulnerable consumers, according to prosecutors. It was unclear whether anyone was sickened or died from taking the product they promoted.

In documents from a civil case last year, a program analyst at the FDA said she ordered the bleach product and had it shipped to her. Federal prosecutors said they found that the solution was being manufactured in a shed in Jonathan Grenon’s backyard.

Officers seized dozens of blue chemical drums with nearly 5000 kilograms of sodium chlorite powder that could produce thousands of bottles of the solution, federal prosecutors said. Loaded firearms were also recovered, including a pump-action shotgun concealed in a custom-made violin case, officials said.

The Grenons were each charged with conspiracy to commit fraud and criminal contempt. If convicted, they could face life in prison, federal prosecutors said.

The church has described itself on its websites as a “nonreligious church,” federal prosecutors said.

Mark Grenon, described as an archbishop and a founder, has also repeatedly said that the church “has nothing to do with religion,” and that he founded the institution to legalise the use of the bleach solution and to avoid going to prison, prosecutors said.

The church has promoted the bleach solution for years.

Jim Humble, a church founder and a former Scientologist, has claimed that he is a billion-year-old god from the Andromeda galaxy. Humble, who was not charged in the case involving the Grenons, said that he asked “to be put in the part of the space navy that watched over Earth,” according to an investigation last year by ABC7 in Los Angeles.

Jonathan Grenon and Jordan Grenon were arrested last summer on related charges based on a complaint filed by federal prosecutors in Miami. They have been detained since their arrest based on a judge’s ruling that they posed a risk of not appearing at future court proceedings and were considered a danger to the community.

Mark Grenon and Joseph Grenon are currently in Colombia, prosecutors said. The Grenons, who could not be reached, have previously represented themselves in court.

Federal prosecutors believe that Mark Grenon and Joseph Grenon operate what they call a “health restoration centre” in Santa Marta, Colombia, where they charge consumers about $US5000 a month to stay at the compound and “dose themselves with Miracle Mineral Solution,” court records show.

Federal prosecutors brought criminal contempt charges against the Grenons, accusing them of willfully violating court orders in a separate civil court case last year that directed the family to halt distribution of the solution.

Prosecutors said the Grenons also threatened a federal judge presiding over the civil case, saying that if the government stopped their solution distribution they would “pick up guns” and instigate “a Waco,” a reference to the deadly 1993 siege by federal agents of a religious sect’s compound in Texas.

This case is one of several that have been prosecuted related to a debunked bleach cure. In 2015, a seller of a bleach solution from Spokane, Washington, was sentenced to more than four years in federal prison.

“I can tell you that the Department of Justice is taking the distribution of Miracle Mineral Solution, and all chlorine dioxide products, extremely seriously,” said Michael Homer, the assistant US attorney for the Southern District of Florida.