Jeremy Corbyn could STAY in the shadow Cabinet: Outgoing Labour leader says he would ‘happy to serve’ after Rebecca Long-Bailey says she would offer him a job if she wins leadership

Jeremy Corbyn hinted he would like to stay part of Labour’s top team after he steps down, saying he would consider a shadow cabinet post if it was offered.

The outgoing leader, who led Labour to its worst election defeat since the 1930s in December, spoke as he toured areas affected by flooding in Wales this afternoon.

At the weekend  Corbynista candidate Rebecca Long-Bailey said she would give Mr Corbyn a top job if she won because she ‘loves’ him.

Asked about the offer today, Mr Corbyn told the BBC: ‘I’ll see what it is, I didn’t know I was going to be offered anything.’ 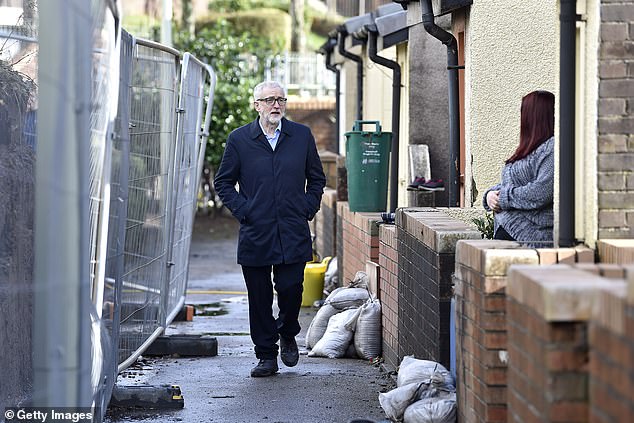 The outgoing leader, who led Labour to its worst election defeat since the 1930s in December, spoke as he toured areas affected by flooding in Wales this afternoon 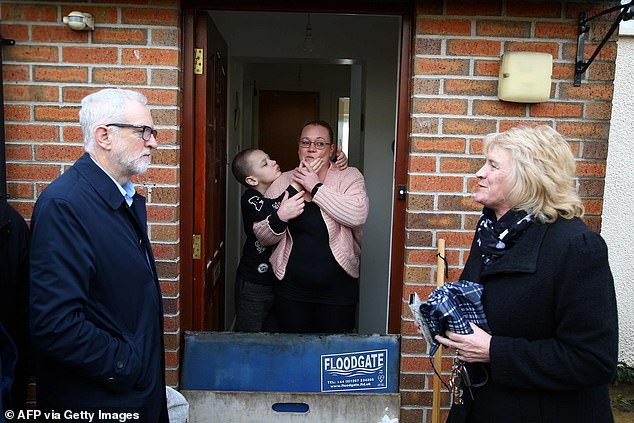 Asked about the job offer today, Mr Corbyn told the BBC: ‘I’ll see what it is, I didn’t know I was going to be offered anything’

He added: ‘I’m happy to serve the party in any capacity.

‘My whole life has been about making my contribution in Parliament, holding the Government to account and for speaking up in policy areas.’

Mr Corbyn made a rare appearance in public this afternoon as he met people in Pontyprydd whose homes have been badly hit by flooding.

He is the first major party leader to visit affected areas, with Boris Johnson staying away so far.

His willingness to stay on is in contrast to his shadow chancellor John McDonnell, who has already said he will return to the backbenches when the new leader takes charge in April.

But Mr Corbyn’s only realistic chance of staying in Labour’s top team is if Ms Long-Bailey wins.

The left-wing candidate is trailing Sir Keir Starmer in Labour’s leadership race, and has been labelled the ‘Continuity Corbyn’ candidate after she gave him ten out of ten for his leadership.

It emerged at the weekend that she had told supporters in London that she would hand the failed leader a high-level brief if she was to succeed him.

Asked if she would give him a job if she got into N 10, the Labour business spokesman said: ‘I’d like to but I don’t know whether he wants to do it… It’s up to him. I love him so.’

Separately, shadow justice secretary Richard Burgon, who is standing to be deputy leader, said he believed Mr Corbyn could play a ‘valuable role’ on the front bench.

‘If he was shadow foreign secretary, that would be ideal,’ he said.

END_OF_DOCUMENT_TOKEN_TO_BE_REPLACED

END_OF_DOCUMENT_TOKEN_TO_BE_REPLACED
Recent Posts
We and our partners use cookies on this site to improve our service, perform analytics, personalize advertising, measure advertising performance, and remember website preferences.Ok