An advisory paper on the importance of ventilation in reducing the risk of infection in enclosed spaces was published in September.

It looked in particular at ‘aerosol transmission’ – infections due to virus particles contained in tiny droplets of water that are carried a distance in the air when exhaled.

The paper, by experts at the Scientific Advisory Group for Emergencies’ Environmental and Monitoring Group (SAGE-EMG), found there was ‘currently no evidence’ for infecting someone more than two metres away from the spreader in well ventilated spaces. 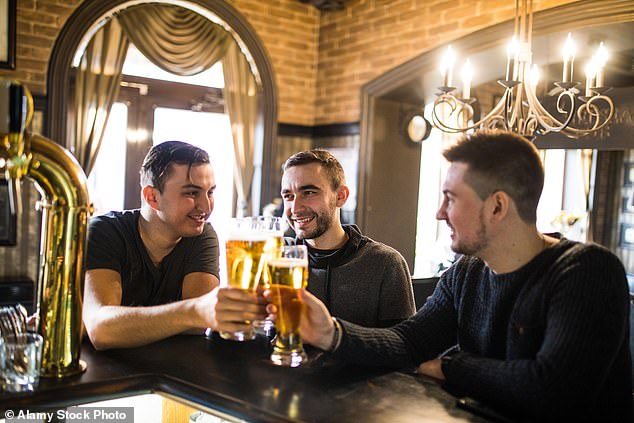 It added: ‘In most settings the risk of aerosol transmission is likely to be low if the ventilation rate achieves current design standards. For most workplaces and public environments, this equates to a flow rate [of air] of 8-10 litres per second per person.’

Building regulations going back to 2005 state that enclosed public places – which include pubs and restaurants – must have ventilation systems that provide an air flow rate of at least 10 litres per second.

Hugo Osmond, founder of Punch Taverns, who now runs the Coppa Club at Tower Bridge in London, last night argued that the SAGE-EMG paper meant restaurants ‘by nature of their ventilation would qualify as safe’.

He added: ‘Every restaurant that has used a reputable ventilation company will have a system installed that delivers 10 litres per person per second.’

Mr Osmond, who studied medicine, said restaurants and pubs had been castigated as potential ‘super-spreader’ hubs, due mainly to the potential risk of aerosol transmission, ‘but this would appear to be contradicted by SAGE’s own paper’.

The document led to public advice to open windows regularly – but its other findings were not highlighted. Kate Nicholls, chief executive of Hospitality UK, said: ‘I’d estimate 80 per cent of pubs and restaurants, and close to 100 per cent of hotels and indoor leisure facilities, meet the ventilation standards.’

A Government spokesman said last night: ‘Unfortunately we know that the virus spreads readily in any indoor environment where members of different households or support bubbles spend time together. These restrictions do not single out restaurants and pubs but apply to a wide range of settings where the risk of transmission is high.’

END_OF_DOCUMENT_TOKEN_TO_BE_REPLACED

END_OF_DOCUMENT_TOKEN_TO_BE_REPLACED
Recent Posts
We and our partners use cookies on this site to improve our service, perform analytics, personalize advertising, measure advertising performance, and remember website preferences.Ok