Cyclist dies in collision with truck at Geelong

Victoria Police is investigating after a cyclist died in a collision with a truck at Geelong.

Police said in a statement emergency services were called to the intersection of Barwon Heads and Breakwater roads at Belmont about 12.15pm on Monday following reports a truck and cyclist had collided. 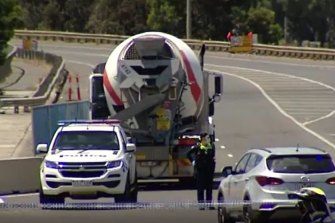 Police at the intersection of Barwon Heads and Breakwater roads at Belmont, where a 74-year-old man died after a truck and bike collided.Credit:Nine News

Ambulance crews worked on the 74-year-old cyclist from Marshall, but he died at the scene.

Last month a 60-year-old man died after being involved in an unrelated collision in Ballarat on October 21.

David Thomson was on his bike when police allege he was hit front-on by a car at an intersection in Delacombe. The grandfather, who took up cycling to improve his fitness, died at the scene.

A 39-year-old man was later charged with culpable driving and hit-run offences over the death.

So far this year, 209 people have died on Victoria's roads.

Investigators are appealing for anyone who witnessed the crash to contact Crime Stoppers on 1800 333 000.