DAILY cases of the coronavirus have increased by 50 per cent in just a week with 568,000 infected within seven days, data has revealed.

Figures from the Office for National Statistics (ONS) show that cases of the virus have grown in all age groups – but especially in older teenagers and young adults. 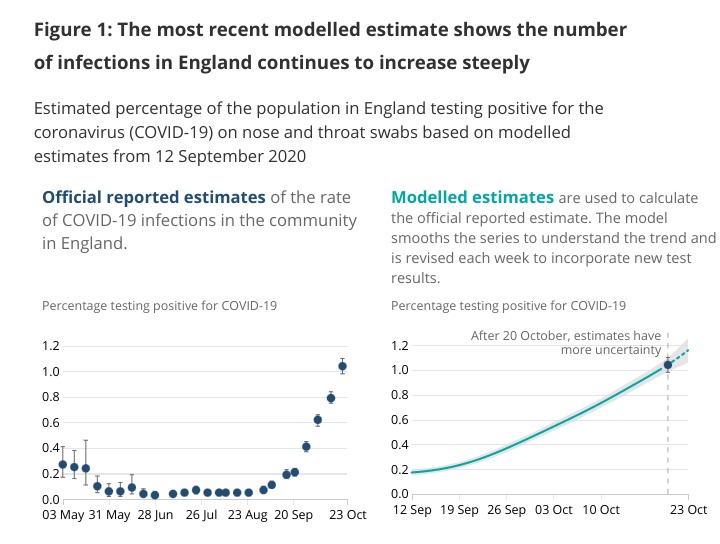 The most recent ONS data covers the period from 17 to 23 October 2020 and states that 1 in 100 people are infected with the virus.

Last week it reported that 433,300 people were infected with the virus in private households – this figure excludes care homes.

Figures from last week also state that there were 35,000 new cases of the virus, while this week the ONS recorded 51,900 new cases per day.

The ONS stated that incidence rates have continued to increase in recent weeks and stated that its model is unable to account for household clustering.

This means that it will not be able to detect when a household has been struck down by the virus.

In recent weeks the ONS states that there has been an increase in the amount of people testing positive for the virus.

The report states: "There has been growth in positivity in all age groups over the past two weeks.

"Older teenagers and young adults continue to have the highest positivity rates, while rates appear to be steeply increasing among secondary school children.

"However, caution should be taken in over-interpreting small movements in the narrower age groups which have wider credible intervals. This is based on statistical modelling of nose and throat swab test results." 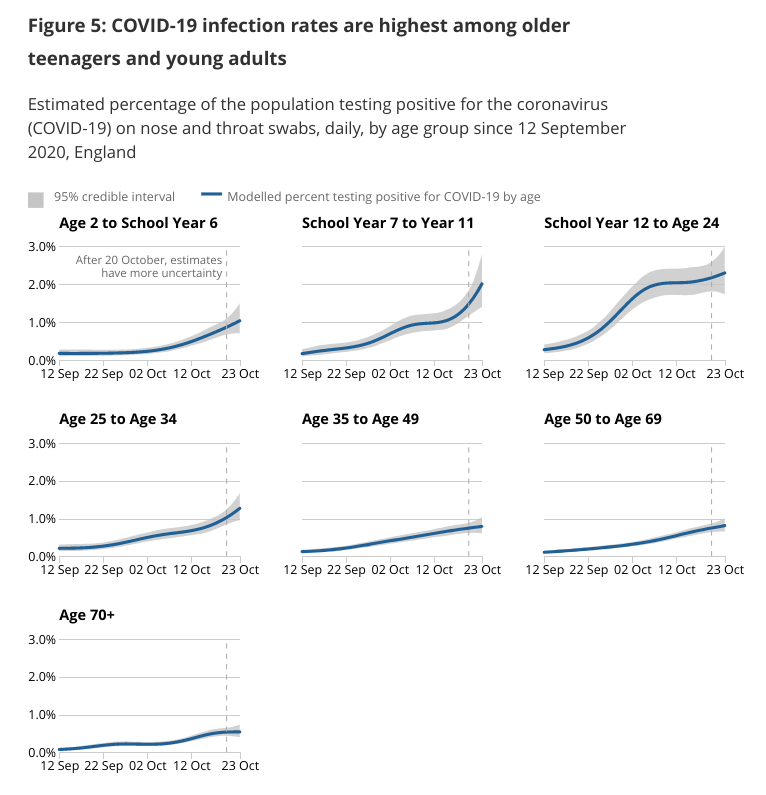 Graphs produced by the ONS show that the biggest increase has been in young adults in school year 12 to age 24.

A large increase has also been seen in school year 7 to 11 and aged two to school year six.

Smaller increases have been seen in older generations with those aged 25 to 34 having a small increase, similar to those aged 35 to 49 and those aged 50 to 69.

Cases in people aged 70 and over seem to have remained relatively flat.

Looking at cases on a regional basis and the ONS states that all regions have seen an increase.

It comes as several areas will be moved into higher Tier restrictions this weekend following an uptick in cases.

King's College London also today revealed the seven places that could be going into Tier 3. 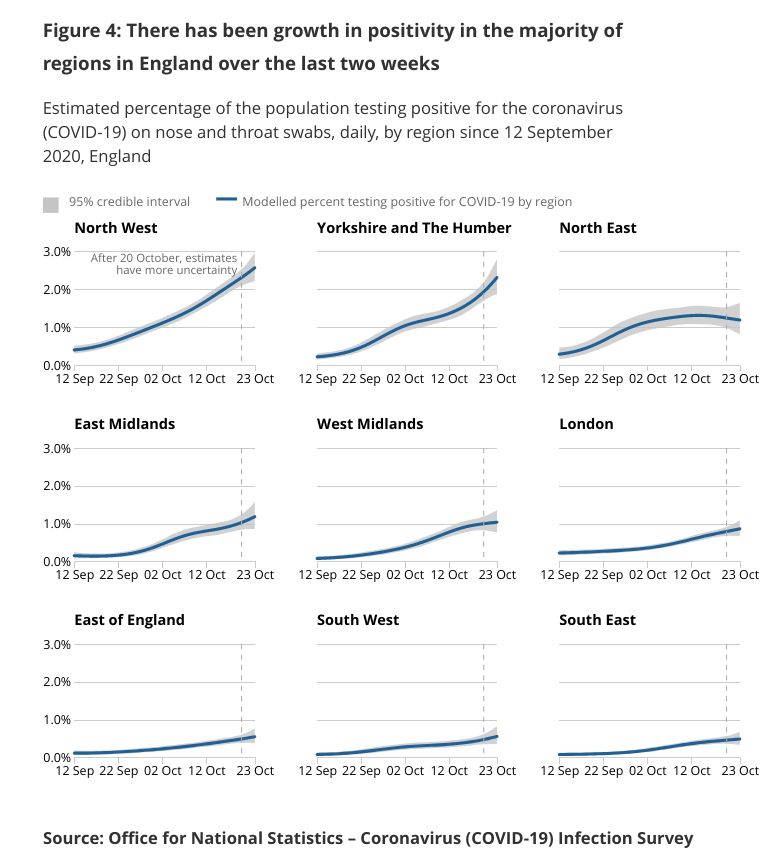 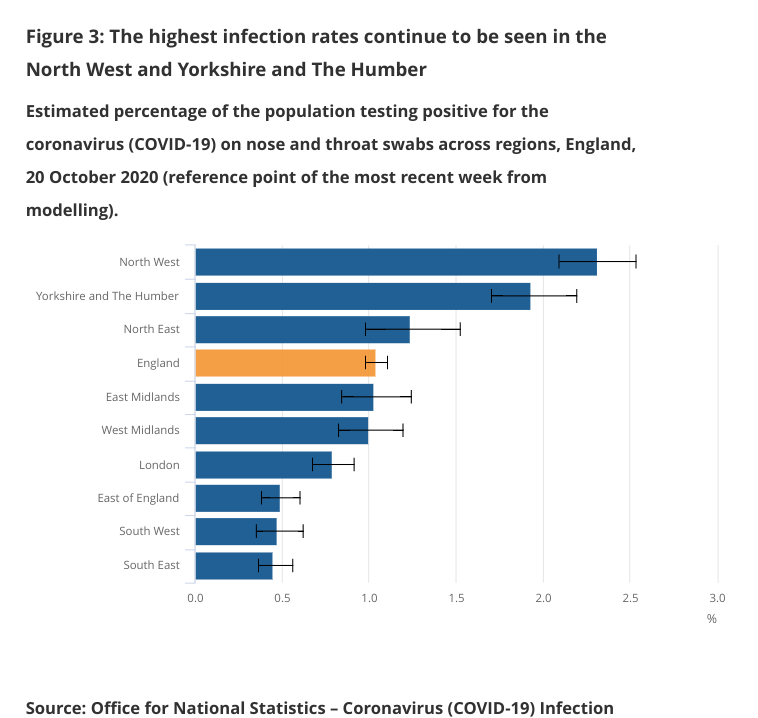 The ONS report states: "Looking at trends over time, there has been growth in positivity in most regions of England over the last two weeks.

"Rates continue to increase steeply in the North West and Yorkshire and The Humber.

"Positivity rates in the North East have levelled off in recent weeks but remain above the England average.

Graphs provided by the ONS show a slight dip in cases in the North East.

Despite this, data from King's College suggested that several areas in the region could be entering into Tier 3 restrictions.

Its model predicted that Sunderland, Newcastle-upon-Tyne, South Tyneside and Country Durham are all on the watchlist.

The graphs also show an increase in the West Midlands and Kings College also highlighted that some of these areas could face further restrictions, while local council leaders have also discussed the possibility of a Tier 3 lockdown.

It was yesterday reported that the number of Brits who have lost their lives to coronavirus is nearing 46,000 – as another 280 people were reported to have died from the virus.

In total, 45,955 people have died with Covid since the UK's outbreak began.

END_OF_DOCUMENT_TOKEN_TO_BE_REPLACED

END_OF_DOCUMENT_TOKEN_TO_BE_REPLACED
Recent Posts
We and our partners use cookies on this site to improve our service, perform analytics, personalize advertising, measure advertising performance, and remember website preferences.Ok