Dress Amy Winehouse wore for her final performance sells for $243,000

Dress Amy Winehouse wore for her final performance at 2011 Belgrade concert a month before she died from alcohol poisoning sells for $243,000- as auction of her memorabilia rakes in $4million

The dress worn by Amy Winehouse at her final performance a month before she died sold on Sunday for $243,200, 16 times its estimated value, as part of a trove of memorabilia from the late singer’s life auctioned in California.

Another item to go under the hammer was the singer’s heart-shaped Moschino bag that sold for a staggering $204,800 at a charity auction at Julien’s in Los Angeles.

The entire collection brought in $4 million, twice the original forecast, according to the auction house, which managed the sale that ran from Saturday to Sunday.

The Grammy Award-winning star, known for her distinctive raspy voice on her soul and jazz hits including Back To Black, Rehab and Love Is A Losing Game, died of alcohol poisoning on July 23, 2011, aged 27.

At her final stage performance in Belgrade, Serbia, in June 2011, just a month before her death, Winehouse donned the figure-hugging green and black halter neck minidress, designed by her stylist Naomi Parry. 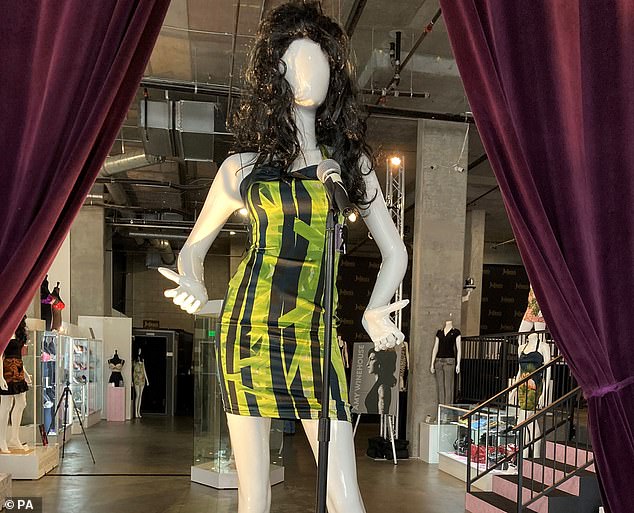 The yellow and black dress worn by Amy Winehouse at her final performance in Belgrade, Serbia a month before she died sold on Sunday for $243,200, 16 times its estimated value. Pictured: The dress on display last week ahead of being sold at auction in Los Angeles 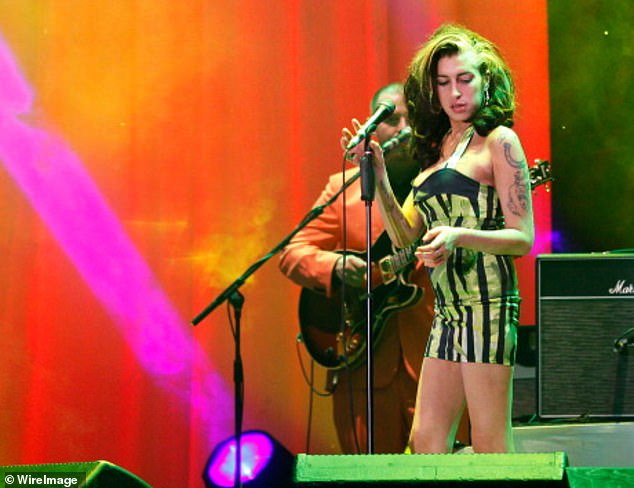 Pictured: Amy Winehouse performs live at Kalemegdan Park on June 18, 2011 in Belgrade, just a month before her death. The singer appeared disorientated and she was booed off the stage

Her performance at the Belgrade Tuborg Festival saw the esteemed singer appear disorientated and she was booed off the stage. Her 18-leg European tour was cancelled and she stayed for a week at The Priory clinic.

The soul singer was found dead in her flat in Camden, north London, less than a month later.

Amy’s stylist and friend Parry said: ‘I feel an immense amount of sadness when I look at that dress. It was supposed to be the start of something new and moving forward. She had been doing so well.’

Fans had the chance to snap up more than 800 of Amy’s personal items, including designer dresses and lingerie, accessories and handwritten notes.

The bold bag was used by Amy at the 2007 Brit Awards, where she won the British female solo artist award.

A Dolce and Gabbana floral golden lam dress worn by Amy during a stage performance in Blackpool in 2007 was expected to raise up to $6,700.

But the gown, which features a fitted bodice with pleated trim, attracted 29 offers and eventually sold for $150,000. 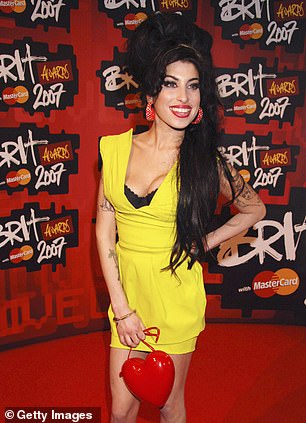 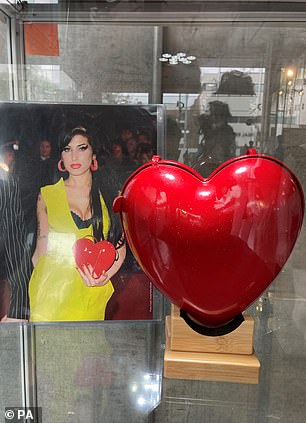 Amy Winehouse’s famous heart-shaped, red leather Moschino bag (pictured being carried by the singer in 2017 and right when up for auction in Los Angeles) went for $204,800 – a staggering ten times its upper pre-sale estimate

A Temperley London tan and black jumpsuit worn at a concert celebrating Nelson Mandela’s 90th birthday in Hyde Park in 2008 was valued at just $2,000.

But the iconic outfit sparked a bidding frenzy, attracting 37 offers, and eventually sold for $121,600.

Similarly, a figure-hugging plaid dress worn by Amy to the Meteor Ireland Music Awards 2007 in Dublin had only been tipped to fetch $4,000.

But the strapless, silk size zero dress with a pleated satin trim sold for $93,750 after 27 bids.

Christian Louboutin heels that Amy wore for the Mandela concert were valued at just $800 – but fetched $38,400. 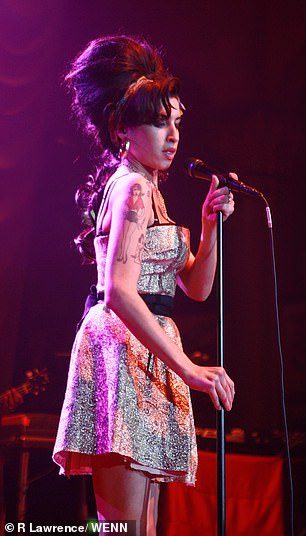 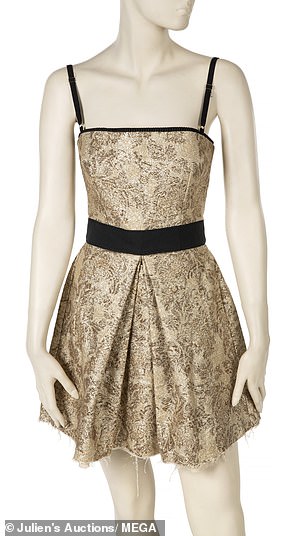 A Dolce and Gabbana floral golden lam dress worn by Amy during a stage performance in Blackpool in 2007 was expected to raise up to $6,700. But the gown, which features a fitted bodice with pleated trim, attracted 29 offers and eventually sold for $150,000

Smaller personal items had starting prices as low as $100 but the level of demand from fans of the late music star and style icon sparked fierce bidding and soaring prices.

And even a collection of her travel tickets – including a London Underground Oyster pass and a used bus ticket – went for $768. 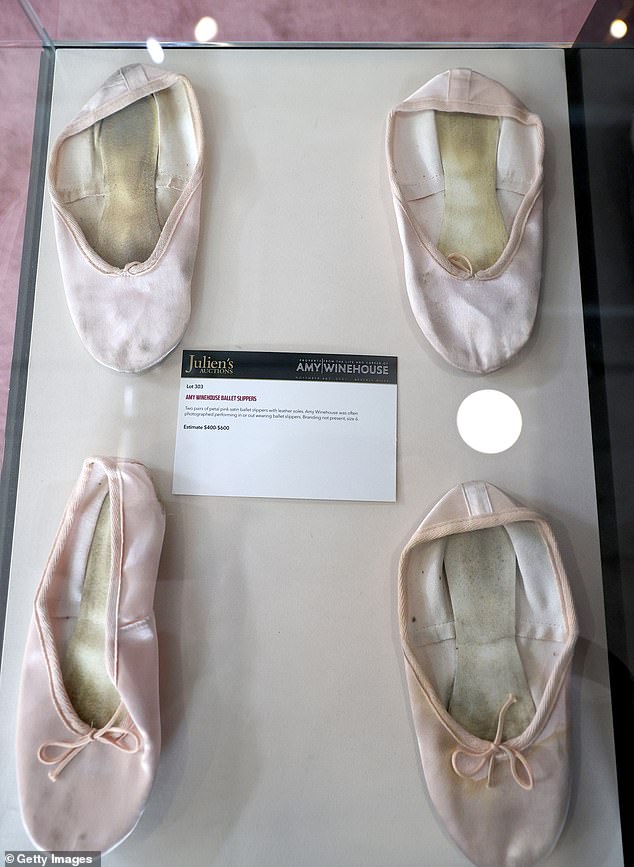 Two pairs of Amy’s trademark pink satin ballet pumps had an estimate of $600 – but were sold at the auction for an amazing $19,200 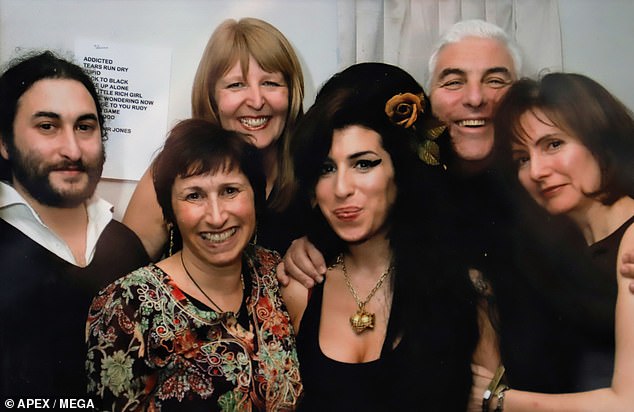 Family: All proceeds from the sale will benefit the Amy Winehouse Foundation, which was set up by the star’s parents Mitch and Janis

Martin Nolan, executive director of Julien’s Auctions, revealed that the auction had attracted the attention of registered bidders from all around the world.

He said: ‘Amy Winehouse is one of the rare and remarkable music icons whose incredible power and soulful expression in every word and note she sang with her distinct voice remains unmatched by any other artist in music history.

‘She is a global icon, a fashion icon, loved all over the world.

‘We celebrate her singular talent and iconoclastic style in this collection of her most personal artefacts and wardrobe worn in her career-defining moments.’

Amy made music history by winning five Grammy Awards in a single night in 2008.

She was found dead aged 27 in her flat in Camden, north London on July 23, 2011. An inquest later found that she died of alcohol poisoning.

The auction of over 800 personal items from her estate raised more than $4 million.

The collection will then be sent to London for Amy: Beyond The Stage exhibition at London’s Design Museum from ­November 26.

A ‘generous portion’ of the proceeds will benefit the London-based Amy Winehouse Foundation, which was set up by the star’s parents Mitch and Janis.