Duke and Duchess of Northumberland recruit BOUNCERS at Alnwick Castle

The Duke and Duchess of Northumbria who live in a castle made famous by the Harry Potter films have hired bouncers to boot out abusive fans after a spate of verbal attacks on staff.

Alnwick Castle in Northumberland has recently reopened partially following lockdown, offering ‘broomstick lessons’ for wizarding fans – who recognise the structure from a scene in Harry Potter and the Philosopher’s Stone.

But bosses at the castle – which is home to the Duke of Northumberland Ralph Percy, 62, and his wife Duchess Jane, 60 – are increasing security following a spate of incidents involving visitors verbally abusing staff and guides.

Due to Covid-19 restrictions, visitors must pre-book tickets, but some have complained about long queues and areas of the castle being closed. 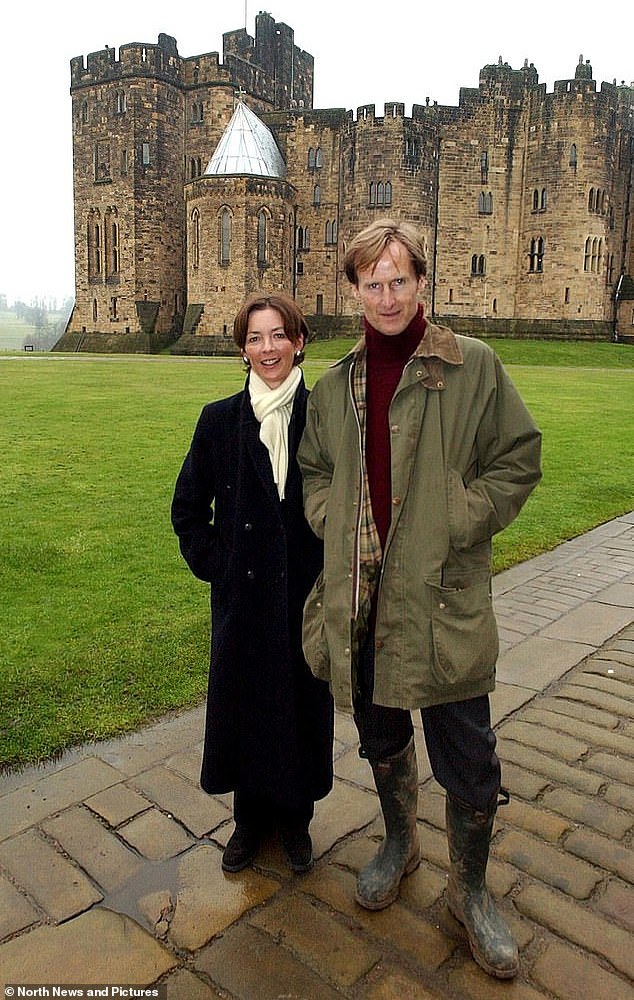 The Duke and Duchess of Northumberland, Ralph and Jane Percy, pictured at their home, Alnwick Castle 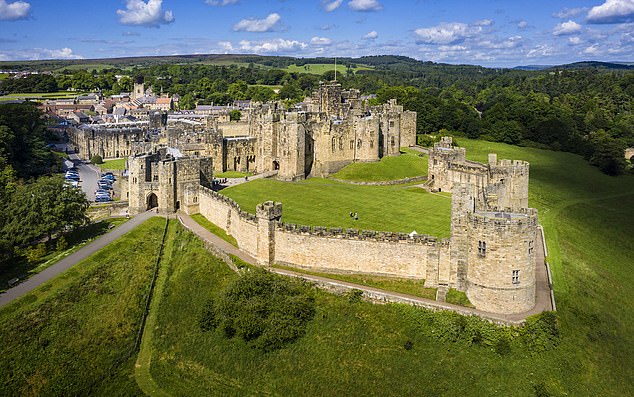 One recent visitor wrote on Tripadvisor: ‘Do not waste your money.

‘To charge £8 to basically look at the walls of the castle is shocking.

‘Yes you could go inside to one part if you were prepared to stand in a queue for an hour. You could be in and out in 10 minutes.

‘Also hope you’re not thirsty unless you’re prepared to pay £2 for a can of Coke.’

Other holidaymakers complained they were not allowed to climb the castle walls while others said guides ‘did not know what they are doing’.

Managers of the castle say abusive visitors will be booted out by ‘our security team’.

A spokesperson said: ‘We are sad to report that we are currently experiencing a high volume of verbally abusive behaviour towards our stewarding staff. 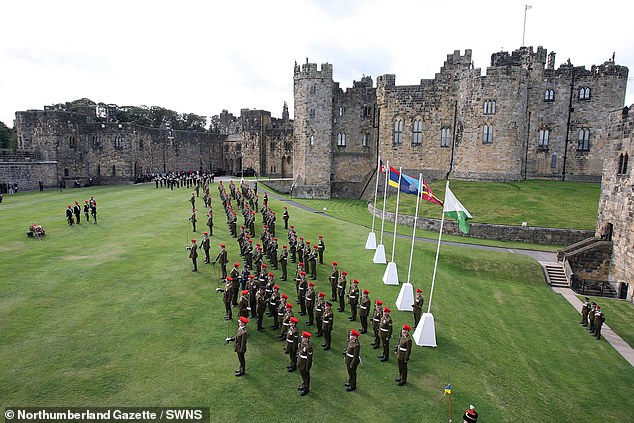 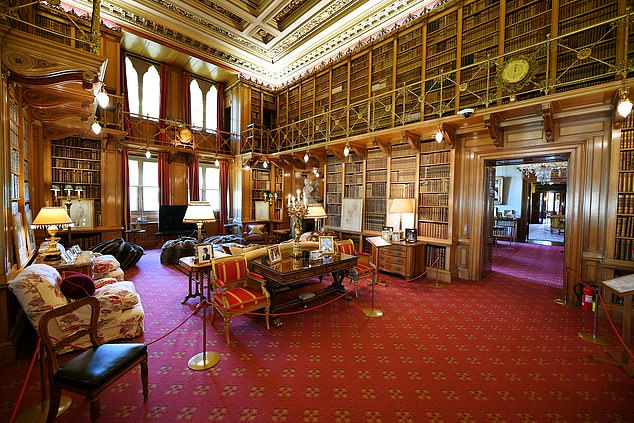 The library at Alnwick castle, the Duke of Northumberland Ralph Percy’s home 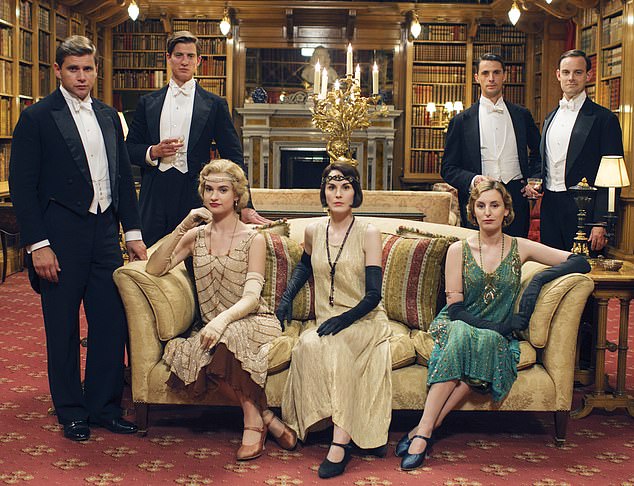 ‘We appreciate that your visit to Alnwick Castle will feel different this year – there are new procedures in place and some areas cannot be accessed.

‘We understand visitors may be frustrated, but we cannot excuse abusive behaviour towards staff or other visitors.

‘We hope all our visitors understand our current opening measures are in place for their safety, and that of our staff, during the challenging times we still live in.

‘Abuse is not acceptable.

‘If any visitors engage in this type of behaviour, our security team may ask you to leave the grounds.’

Measures put in place include visits only via booking, access restricted to the inside of the castle and limited numbers allowed in the museum.

Art, history, and Harry Potter: The life of Alnwick Castle

Alnwick Castle, a 150-room, heavily crenellated, many-towered magnificence perched on a rocky outcrop above the River Aln in Northumberland, is the second-largest privately inhabited castle after Windsor — and it bears the scars of centuries.

There are musket pockmarks, made by Oliver Cromwell’s army, in the yellow sandstone.

In the main entrance, a maroon board offers Broomstick Training sessions on the very spot where Daniel Radcliffe had his first flying lesson in Harry Potter And The Philosopher’s Stone.

Ralph Percy, the 12th Duke, with the help of his energetic Duchess, Jane, transformed Alnwick into one of Britain’s most visited attractions.

The castle is exquisite — an assault of gilded ceilings, gold leaf, polished floors, gleaming swords and exquisite views over the Capability Brown-designed parkland.

There is an art collection, described as one of the finest outside the Royal Collection, which includes works by Turner, Titian, Canaletto, Van Dyck and William Dobson. 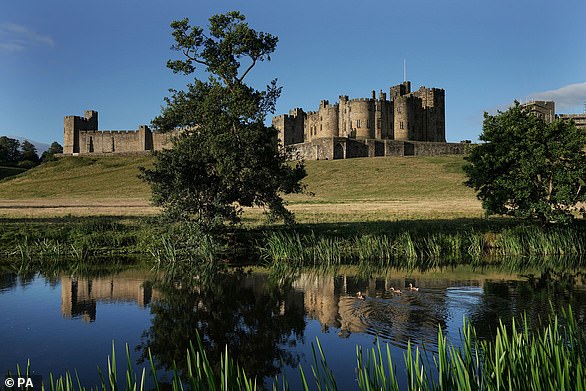 Alnwick Castle, home to the Duke and Duchess of Northumberland, reflected in the River Aln

Maintenance of the castle costs more than £1.5 million a year. Ralph and Jane had to make the castle work in the 21st century, as a home, a tourist spot and historical treasure, fighting against convention with a raft of visitor attractions, jousting sessions, gift shops and tearoom, and a few controversial decisions.

Over the years, the castle has featured as a backdrop for Blackadder, Robin Hood: Prince Of Thieves, Elizabeth, Mary Queen Of Scots, Transformers and the Christmas special of Downton Abbey.

But it was Harry Potter — and, in particular, the broomstick lessons and Quidditch matches — that really changed things.

‘There’s been a huge Harry Potter effect and we’re very grateful for it,’ says Ralph. ‘We do as much Harry Potter stuff as possible and it just doesn’t seem to die out.’

Over the centuries, Alnwick has had so many incarnations, lurching from good fortune to bad and back again with every new monarch.

During the Reformation and Counter-Reformation, the Percys abandoned Alnwick as the north was considered too dangerous.

By the 18th century they were back, and the place was abuzz. There was a staff of more than 200 maids, cooks, valets, butlers, grooms, ten priests and, at one point, even a resident executioner.

Now the staff seems to consist mostly of guides, shop assistants, cafe workers and gardeners. The Percys themselves have a daily as well as a chef.

END_OF_DOCUMENT_TOKEN_TO_BE_REPLACED

END_OF_DOCUMENT_TOKEN_TO_BE_REPLACED
Recent Posts
We and our partners use cookies on this site to improve our service, perform analytics, personalize advertising, measure advertising performance, and remember website preferences.Ok