‘English strain’ of coronavirus ‘concludes a disaster year for the UK’: European papers mercilessly tear into ‘chaos’ hitting Britain as Europe ‘shields itself from mutant Covid’

The UK is in ‘chaos’ as Europe ‘shields’ itself from an ‘English strain’ of coronavirus that is spreading ‘out of control’, the world’s media has reported today.

News that Europe has begun cutting itself off from Britain after the discovery of a coronavirus variant that is up to 70 per cent more infectious made headlines around the world on Monday.

European papers described the situation as ‘chaos’, raising fears of food shortages as ferry and air traffic grounds to a halt. 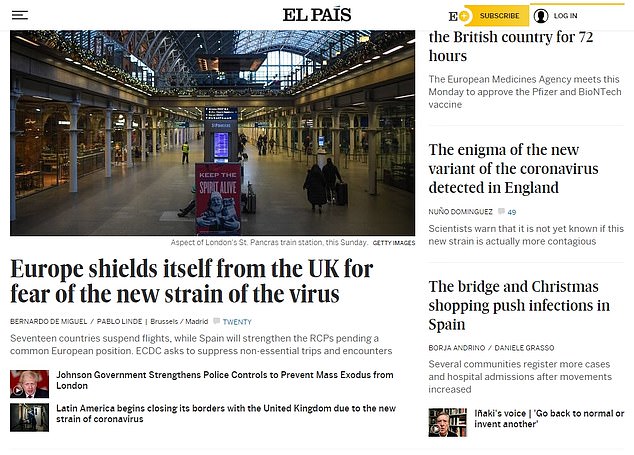 Europe is ‘shielding itself’ from the UK over a new strain of coronavirus that is up to 70 per cent more infectious, Spain’s El Pais newspaper reported on Monday 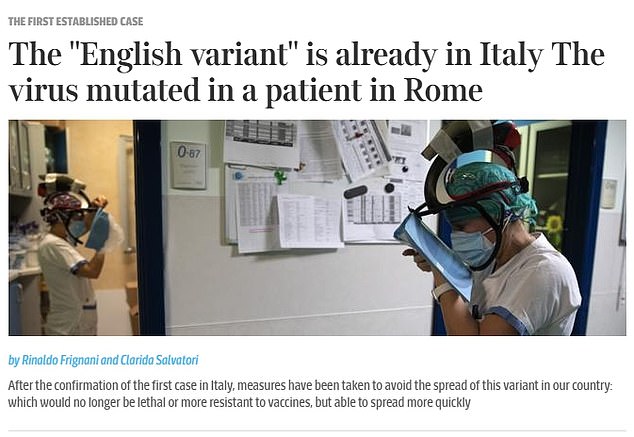 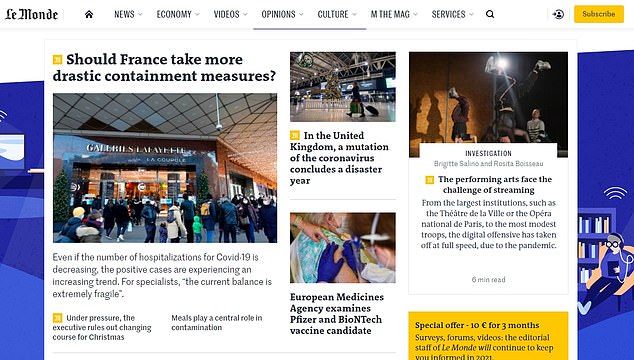 France’s Le Monde newspaper said the mutation ‘concludes a disaster year’ for the UK, while asking if its domestic lockdown needs to be increased

The chaos erupted at the weekend, as Boris Johnson cancelled Christmas for millions over fears of a ‘new strain’ of virus spreading in England’s south east.

That prompted countries including Germany, Italy, the Netherlands, Belgium, Poland, Austria, Denmark, Ireland, and Bulgaria to restrict travel with the UK, over fears that incoming travellers would spread the strain.

Then the chaos then deepened as France announced it was closing its borders to freight leaving the Port of Dover, through which a fifth of all UK goods travel each day, for 48 hours – putting food and medical supplies at risk.

‘Passengers of ferries from the UK are no longer welcome here,’ De Telegraaf, from the Netherlands, reported. 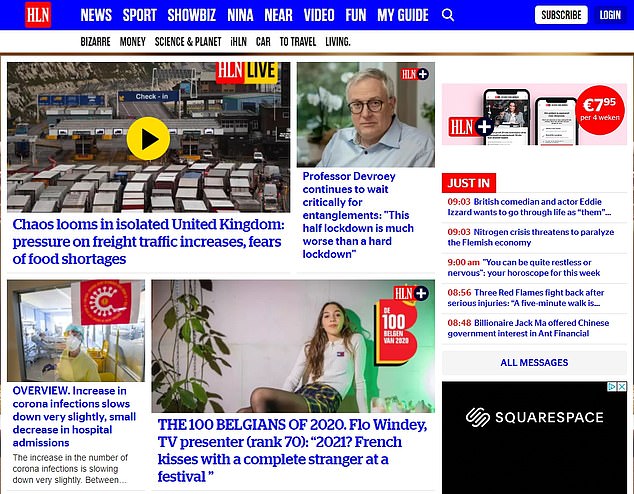 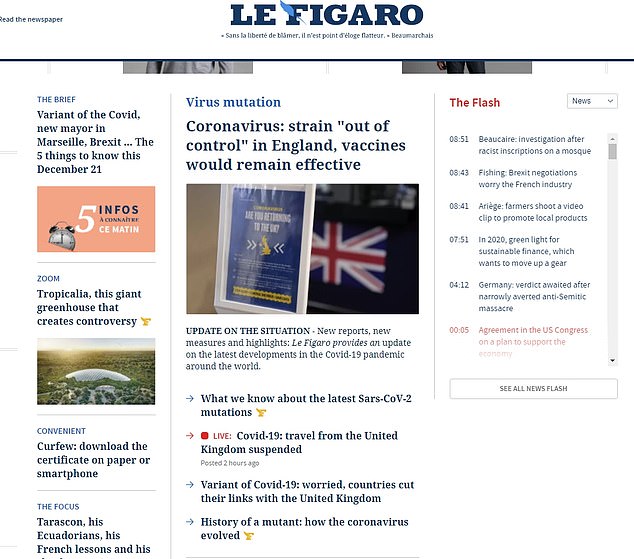 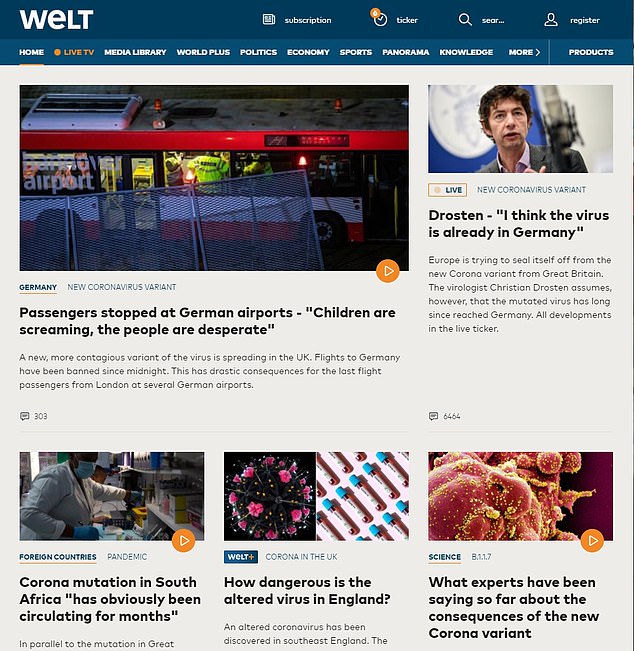 In Germany, papers focused on disruption at airports as incoming passengers from the UK were isolated in arrivals halls until they tested negative

Echoing isolation measures that coronavirus patients have been subjected to, Spain’s El Pais said: ‘Europe shields itself from the United Kingdom for fear of the new strain of the virus’.

One of Germany’s biggest newspapers, Bild, led with the news that travellers from the UK are being held in arrivals at Hanover airport until they test negative for the virus – and are being forced to sleep on cots and the floor in the meantime.

One passenger called it a ‘scandal’ with others demanding to speak to a lawyer, while similar scenes unfolded in Berlin where 77 people were awaiting test results this morning after arriving from Britain last night.

In Ireland, papers led with the news that UK travel bans – currently in place for 48 hours – could be extended when ministers meet today.

Meanwhile, Sweden’s Aftonbladet newspaper questioned why the Prime Minister has not already imposed travel restrictions over fears about the virus. 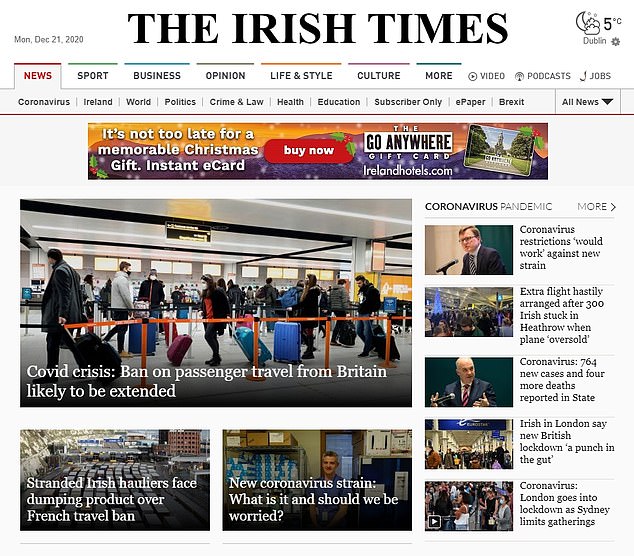 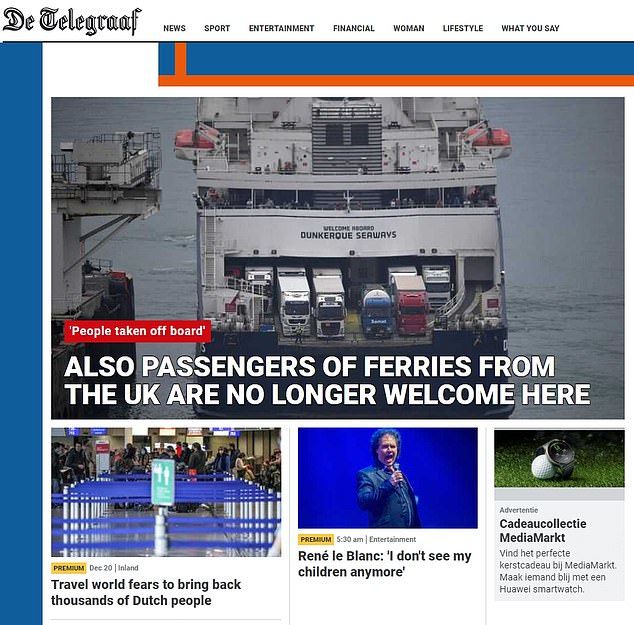 In the Netherlands, the Telegraaf newspaper led with the news that ferry passengers are also being stopped from arriving, as well as air passengers

In America, the New York Post put comments by Governor Andrew Cuomo on its front page in which he called for all passengers coming from the UK to be virus tested ahead of their flights.

It is ‘reprehensible’ and ‘utterly negligent’ that testing is not already underway, he said, adding that: ‘Right now, this variant is getting on a plane and flying to JFK.’

In Australia, newspapers led with reports that the new virus strain has already been detected in two passengers arriving from the UK, calling it ’cause for concern’.

New Zealand, which has all-but eliminated the virus, also led with that news, asking ‘when will it reach [us]?’

The emergency isolation measures came into force at the weekend as news of the ‘mutant strain’ emerged, with further measures likely to come into force this week.

Germany announced it was calling emergency talks on Monday to co-ordinate the response of the EU’s 27 member states to the virus.

It came after the Irish government said it was imposing a 48-hour ban on flights from Britain while ferries would be restricted to freight only.

The Netherlands said it will stop flights from the UK at least until the end of the year while Belgium has imposed a 24-hour ban on flights and rail links while it assesses the situation.

Italy is prohibiting entry to the country by anyone who has been in the UK in the last 14 days and flights are banned until January 6 while Austria, the Czech Republic, El Salvador, Turkey and Canada also imposed new restrictions. 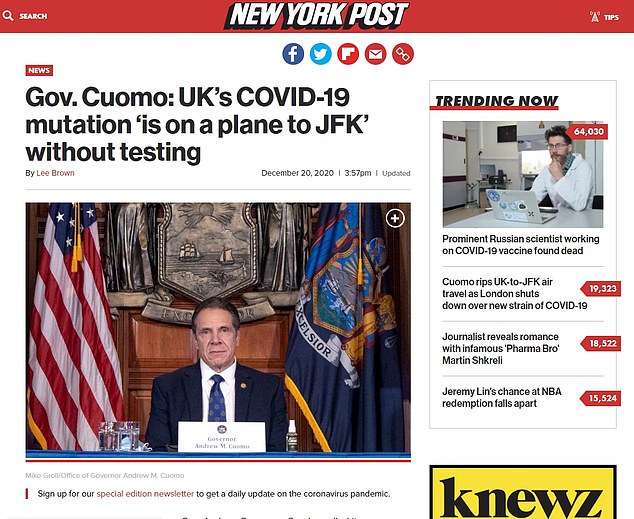 Further afield, in the US, the New York Post carried a warning from Governor Andrew Cuomo that passengers from the UK should be tested for the virus to stop it spreading

In New Zealand, the Herald newspaper worried about when the new virus would arrive on its shores, risking its world-beating virus response 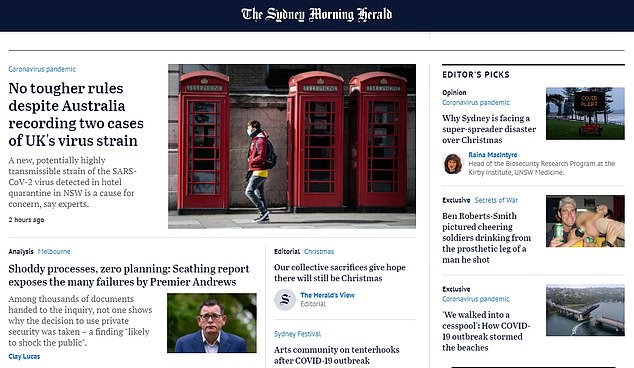 Countries reacted after Mr Johnson announced on Saturday that the new variant was up to 70 per cent more transmissible than the original strain as he put London and parts of the South East and East of England into a two-week Christmas lockdown, with nearly 18 million people in a new Tier 4.

Health Secretary Matt Hancock admitted the new variant coronavirus was ‘out of control’ and said the new restrictions may have to remain in place for months.

Concerns about the rapid spread of the disease were underlined with the publication of the latest official figures showing there had been a further 35,928 lab-confirmed cases of coronavirus in the UK as of 9am on Sunday.

Millions of people have been forced to tear up their festive plans, with Mr Johnson effectively cancelling Christmas for those in Tier 4.

In the rest of England, Christmas easing is severely curtailed, with households allowed to gather for just one day – Christmas Day itself – rather than the five days previously planned, while Scotland and Wales are also restricting Christmas ‘bubbles’ to a single day.

And at an emergency meeting late on Sunday night, the Northern Ireland Executive agreed to reduce the five day Christmas bubbling arrangements to just one day.

Ministers also debated a temporary ban on travel from Great Britain to Northern Ireland because of the new Covid variant, with further discussions expected on Monday.

END_OF_DOCUMENT_TOKEN_TO_BE_REPLACED

The Daily Star’s FREE newsletter is spectacular! Sign up today for the best stories straight to your inbox Children living in a smart home are more likely to eco shame their parent s' efforts to be green. A study of 2,000 parents found kids who live in a home with

END_OF_DOCUMENT_TOKEN_TO_BE_REPLACED

END_OF_DOCUMENT_TOKEN_TO_BE_REPLACED
Recent Posts
We and our partners use cookies on this site to improve our service, perform analytics, personalize advertising, measure advertising performance, and remember website preferences.Ok