Home » Even if successful, ‘change coalition’ will not silence Netanyahu

Even if successful, ‘change coalition’ will not silence Netanyahu

Jerusalem: Israeli Prime Minister yesterday called a unity government plan led by a former protege to unseat him as “the fraud of the century”.

“There is not a single person in Israel who would have voted for Naftali Bennett if they had known what he would do,” he tweeted.

Far-right Yamina party leader Naftali Bennett earlier threw his crucial support behind the “change coalition” which could end of Netanyahu’s 12 years in power. 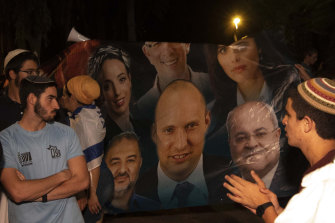 A diverse coalition of opposition parties says it has the votes to form government.

Under their agreement, reached after weeks of negotiations spearheaded by centrist opposition leader Yair Lapid, former Netanyahu defence minister and ally Naftali Bennett will lead a power-sharing government. Bennett, 49, would reportedly serve as the next prime minister to be succeeded in that role by Lapid, 57, at a later date.

“We could go to fifth elections, sixth elections, until our home falls upon us, or we could stop the madness and take responsibility,” Bennett said in a televised statement on Sunday evening (Monday AEST). “Today, I would like to announce that I intend to join my friend Yair Lapid in forming a unity government.” 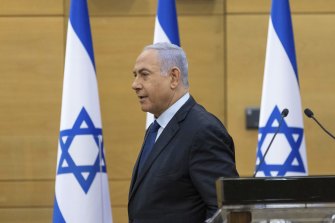 Not leaving just yet: Israeli Prime Minister Benjamin Netanyahu in the Israeli parliament on Sunday.Credit:AP

Lapid was expected to inform President Reuven Rivlin of his ability to form a government on Monday and will have a week to finalise coalition deals. At the end of the week, the government will be put to a vote of confidence in the Knesset.

Netanyahu, 71, has struggled to hold on to power after four inconclusive elections in two years while facing an ongoing corruption trial. Bennett is one of several former loyalists who have flirted with joining the so-called change coalition.

With few moves left, political observers say, Netanyahu will probably spend the coming week applying pressure to MPs from Yamina and other right-wing parties in the hope of chipping away at its parliamentary majority and triggering a fifth election. 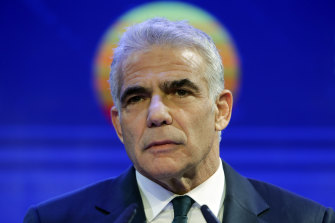 Yair Lapid was tasked with forming a government before the 11-day Gaza war against Hamas last month.Credit:AP

The announcement followed the 11-day conflict between Israel and Hamas in the Gaza Strip this month, which some analysts speculated would help bolster the embattled Netanyahu. At the outset of the fighting, Bennett, a former Netanyahu protege who had been poised to join a unity government with Lapid, said the military operation, which killed more than 250 Palestinians and 12 Israelis, had ended his interest in joining the anti-Netanyahu coalition, which has the support of left-leaning and Arab parties.

But after an Egyptian-brokered ceasefire took hold on May 21, criticism of Netanyahu surged again. Some 47 per cent of Israelis said they opposed the ceasefire, and 67 per cent said they expected another round of fighting with Hamas within the next three years, according to opinion polls published last week by Israel’s Channel 12.

Netanyahu’s rivals said the operation lacked a coherent or long-term strategy, and that Netanyahu’s failure to stop Hamas rocket fire from raining down on Israel or secure the remains of Israeli soldiers was further proof of his need to leave office.

“With the best intelligence and air force in the world, Netanyahu managed to extract from Hamas an ‘unconditional ceasefire’. Embarrassing,” tweeted Gideon Saar, another former Netanyahu protege now with the change coalition.

As the negotiations to oust him progressed, Netanyahu responded with fury.

“What’s changed since [the conflict?] A few days have passed? Has something changed? Of course not,” he said in a video posted on Twitter. “We just got out of a war, from a military operation, and it was clear, amid the battle, that it’s not possible to fight with Hamas from a left-wing government.”

He urged Bennett to join his bloc of ultra-Orthodox and religious Zionist parties to form a right-wing government. “It’s still not too late,” he said.

Then he offered a last-ditch three-way rotation agreement to Saar and Bennett. Saar immediately refused.

“Our position and commitment was and remains: to change the Netanyahu regime,” Saar said on Twitter. “We will continue to act accordingly.”

Israeli media outlets have described Saar as likely the next justice minister – a position that would put him in greater conflict with his former mentor. Netanyahu is accused in separate cases of bribery, fraud and breach of trust. He has denied wrongdoing.

Saar has criticised Netanyahu’s calls to end the legal proceedings against him, saying the process should move forward free of politicisation. After Saar left Netanyahu’s Likud party in 2020, he said it had become a “tool for the personal interests of the person in charge, including matters relating to his criminal trial.”

Netanyahu’s pitch to Saar and Bennett was the latest in a string of offers aimed at keeping him in power. He has also tried to lure defectors from Bennett’s party to join his own group. Political observers say Netanyahu, who failed to cobble together a governing coalition during his own four-week window, has little chance of forming his own government. Instead, they say, he hopes to derail the opposition agreement and force yet another election in coming months, buying time and another chance at the ballot box.

The change coalition, in which Bennett would deliver the 61 seats needed to form a parliamentary majority, draws on support from Israel’s right, centre, left and, indirectly, the Arab-Islamist Ra’am party.

The agreement comes two and a half years into a political stalemate during which Netanyahu has presided over a caretaker government that, as it transitioned from the COVID crisis to the conflict in Gaza, made no ministerial appointments, passed no budgets, and left the health, education and other institutional sectors in a prolonged state of limbo.

Lapid, who won the second-largest number of seats in the latest round of elections in March, assumed the 28-day mandate for forming a government May 5 after Netanyahu failed.

In the coming week, the change coalition’s right-wing members are likely to face pressure to abandon the effort from Netanyahu supporters and from their bases, which have expressed discomfort with a government in which the centrist Lapid will play a prominent leadership role.

After Israeli media outlets reported on Saturday that Bennett was preparing to sign a coalition deal with Lapid, right-wing groups began circulating an image of Bennett in a black and white chequered kaffiyeh, under the caption “liar”. A similar picture circulated of then prime minister Yitzhak Rabin in the months before his assassination in 1995 by a Jewish ultra-nationalist who equated his Israeli-Palestinian peace initiative to treason. Israeli police is investigating online threats against Bennett and have assigned him additional security, according to Israeli media.

Netanyahu’s 12 years in power have brought deeper division to an already fractious society. Gayil Talshir, a political scientist at Hebrew University of Jerusalem, said he expected Netanyahu would continue to foment turmoil.

“Netanyahu is the champion of incitement, and once he’s out of office, we’re not just going to return to normal times,” she said. “Netanyahu will give this government hell.”