Facebook blocks images of COWS for being 'too sexy'

The innocuous photos banned by Facebook: Social media giant apologises after it blocks art gallery’s images of COWS, the England cricket team and a high-rise office block because they are judged ‘too sexy’

Facebook has apologised for banning a small art gallery from advertising on its site after the social media giant deemed photos used to promote the business – including cows standing in a field – ‘overtly sexual’.

Winchester-based Northwall Gallery was prevented from advertising with the US behemoth after it repeatedly used photos which violated its Advertising Policies on ‘prohibited content’ – including ‘drugs’ and ‘adult content’.

The offending photos included cows standing in Winnall Moors, the England cricket team huddled, a high-rise office building, and nesting herons – all bizarrely suppressed by Facebook for being ‘overtly sexual’.

Photos of a neon sign which spelled the word ‘disco’ and Army soldiers drinking cups of tea were banned for ‘promoting alcohol’, while a photo of tramlines in France failed Facebook’s ‘ticket sales policy’.

Facebook, headquartered in California, also blocked photos of a firework display for ‘promoting weapons’ and pond ripples for ‘selling adult products’, according to Hampshire photographer and gallery owner Mike Hall.

Mr Hall was forced to wait two months before the ban was lifted by the social media giant after he made a number of appeals.

However, the 50-year-old artist said Northwall Gallery took a financial hit during that time because it could not share sponsored posts. 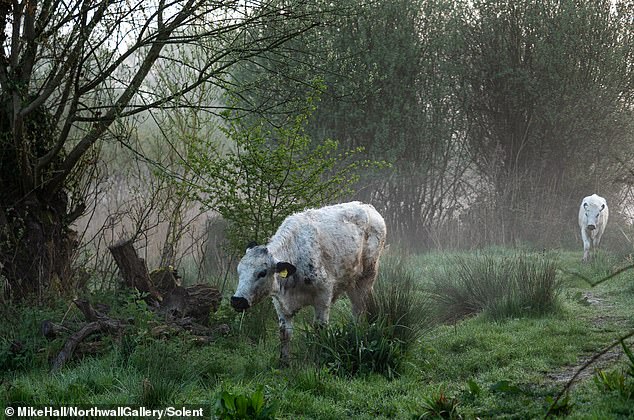 OVERTLY SEXUAL? Facebook deemed this photo of cows in a field as ‘overtly sexual’ 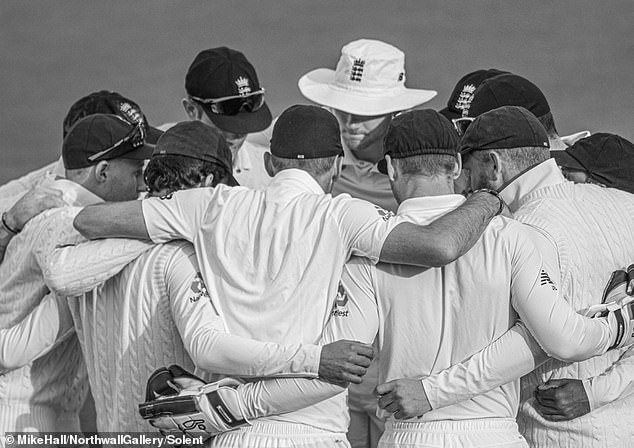 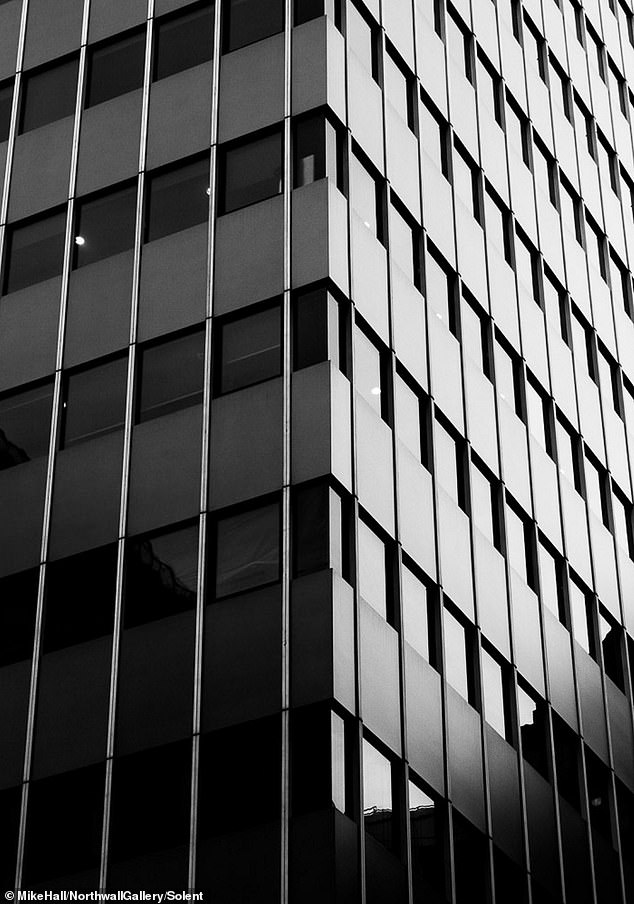 A Facebook Company Spokesperson told MailOnline: ‘Mr Hall’s advertising account was restricted in error and has now been reinstated. We would like to apologise to Mr Hall for any inconvenience caused.’

Furious Mr Hall said he was banned completely from advertising on Facebook after so many of his photos were rejected by the social media giant.

He said on each occasion one of his photos was banned he had appealed, but had not had a response, and was unable to make contact with anyone at Facebook.

The Winchester photographer said: ‘We had to give all the information to prove we are a legitimate business, and then set up a store to sell prints of photos.

‘We started getting rejections for uploading the photos for a variety of ludicrous reasons, which we kept appealing against.

‘I kept having to say ‘this is not overtly sexual – it’s two cows in a field,’ and ‘how is an abstract photo of a pond ripple selling sex products?’

‘At first we thought it was a mistake, but in November a letter said they had banned me from advertising completely.’ 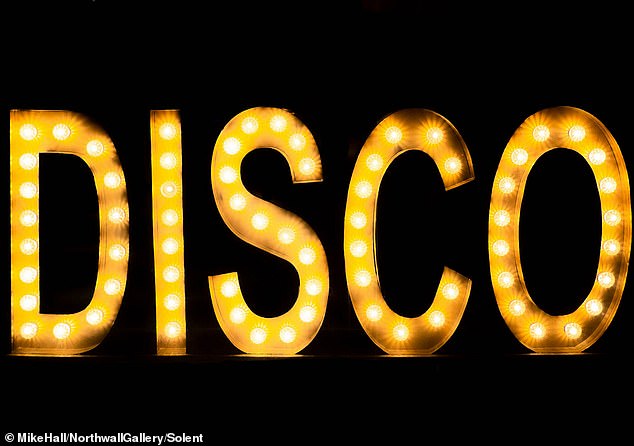 PROMOTING ALCOHOL? A neon sign which read ‘disco’ was said to be promoting alcohol 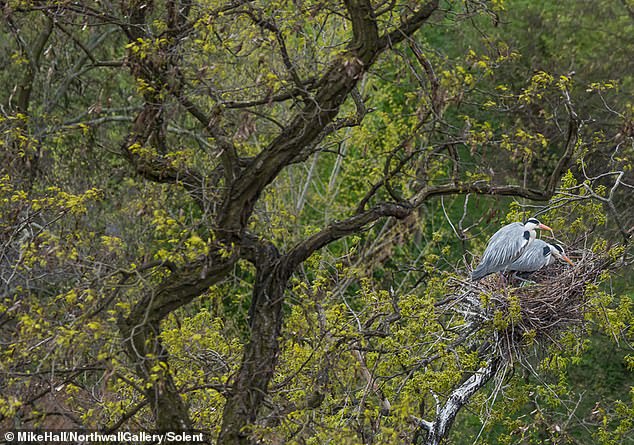 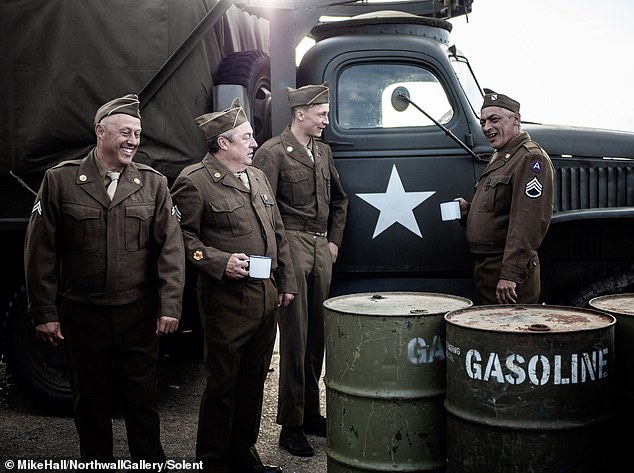 PROMOTING ALCOHOL? A brew image was said by Facebook to be ‘promoting alcohol’

Father-of-three Mr Hall added: ‘It’s not as though they were even remotely sexual. They even said a photo of some office buildings was overtly sexy, but it’s not even phallic – it’s just an office block.

‘It’s not like it’s the Gherkin, or anything. It’s obviously just an error in the algorithm.

‘The response you get is so immediate after you upload the image. It’s just one of those ‘computer says no’ sort of moments.

‘One of the things I found particularly annoying was them saying their ridiculous decision to ban me was final – then a minute later asking me how they have done.

‘I didn’t even have the opportunity to speak to anyone, and I still don’t know what policy I violated. It was ridiculous.’ 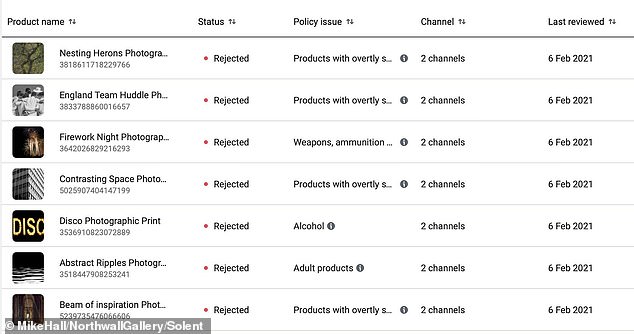 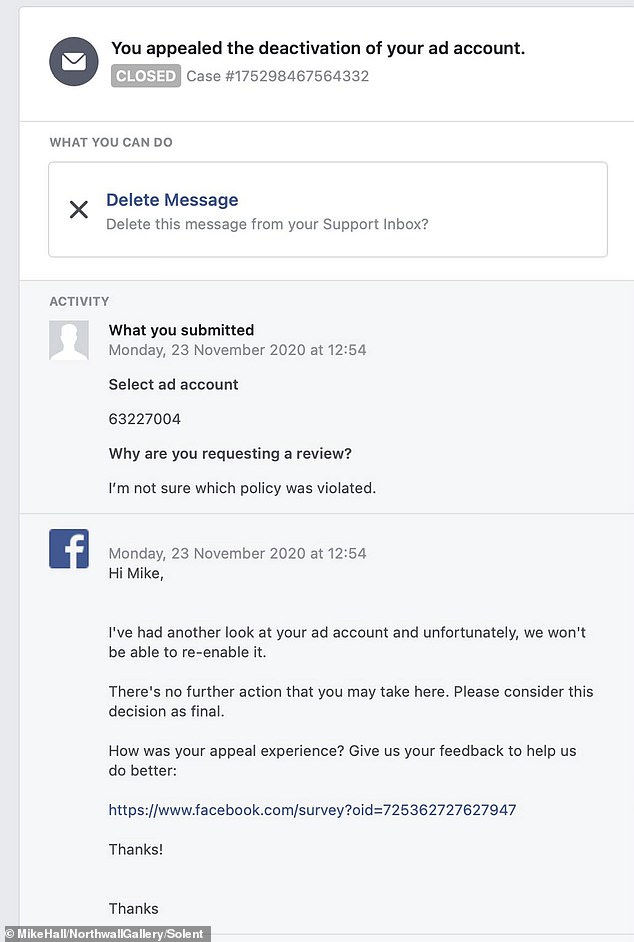 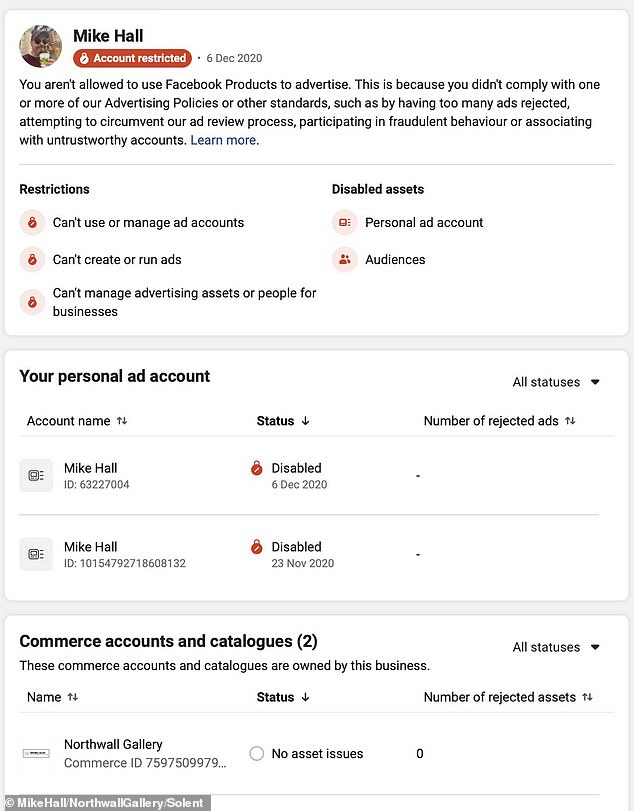 Mike Hall was forced to wait two months before the ban was finally lifted in an extraordinary climbdown. However, he said Northwall Gallery took a financial hit because it was unable to share sponsored posts. Pictured, screenshots from Mr Hall’s Facebook account

In the letter, Facebook said: ‘Hi Mike. I’ve had another look at your ad account and unfortunately, we won’t be able to re-enable it.

‘There’s no further action that you make take here. Please consider this decision as final.’

Finally after multiple appeals, the ban was reversed last week – two months after it was first imposed – meaning the gallery could continue to use its photos to promoted its business.

Facebook uses a combination of artificial intelligence and human employees to monitor and police its adverts.

A statement on the platform’s Advertising Policies page states that ads must not contain ‘adult content’: ‘This includes nudity, depictions of people in explicit or suggestive positions, or activities that are overly suggestive or sexually provocative.’