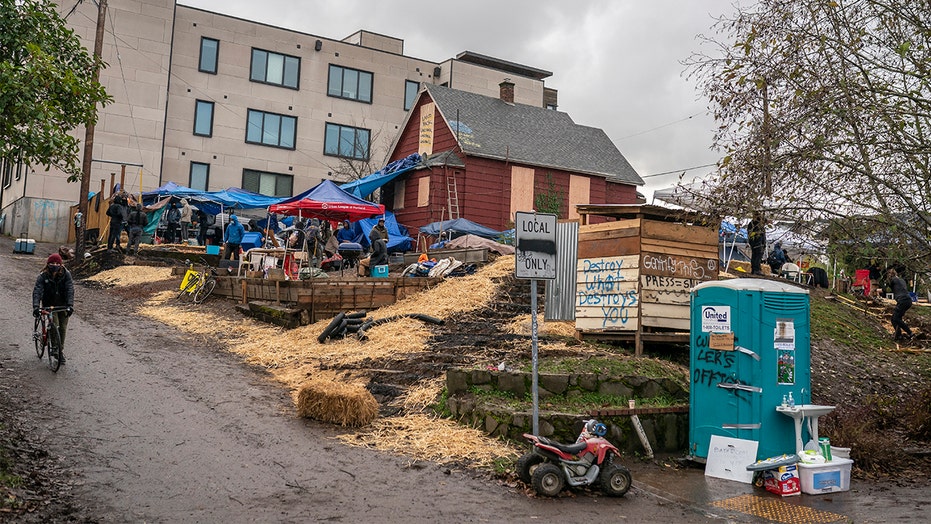 The owners of a home in Portland that has become another flashpoint between police and Antifa demonstrators protesting racism and gentrification stopped making loan payments while claiming to be citizens of a country they invented.

The small red house on North Mississippi Avenue has been in the Kinney family for 65 years and has been the site of protests since September, when authorities tried to evict them after the mortgage lapsed. An activist group that organized an eviction blockade that prevented access to the home has since reached an agreement with Mayor Ted Wheeler, it said over the weekend.

The fortifications were taken down, according to local news reports. Guards armed with paintball guns said they would allow traffic on Mississippi Avenue to reopen by 6 p.m. Monday, The Oregonian reproted.

The Kinney family paid cash for the home but took out a loan against it in 2002 to pay legal fees for their son, who went to prison for an automobile accident, according to the family's website.

Calls to the Kinney family were not answered or returned.

The Daily Caller reported that son William III, who goes by William X Nietzche, pleaded guilty to a felony hit-and-run and third-degree assault. He ran a stop sign while driving with a suspended license and hit a car, killing an 83-year-old man and injuring his wife.

In 2004, the family refinanced the loan but stopped making payments when they said they received documents from two separate companies.

The home was put into foreclosure in 2018. The family has filed a series of lawsuits to stop the foreclosure.

In a YouTube video, William Kinney said the loan was predatory.

"They have used this kangaroo court to try and eject my elderly mother and father on 20 or 30 occasions," he said.

The Daily Caller reported the family was given multiple notices and options to repay the debt. During the proceedings, Julie Kinney declared herself a "living American sovereign," according to one document dismissing their complaint. 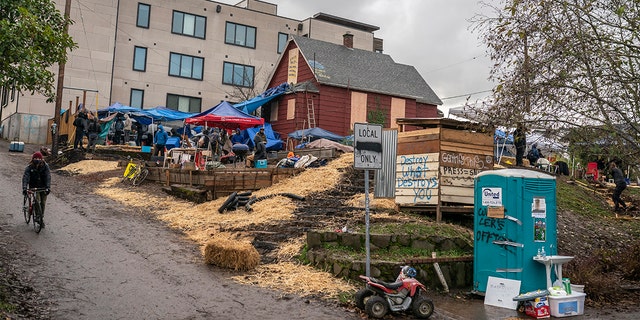 She further claimed that the foreclosure company had no jurisdiction "on the land of Oregon" and in "My republic State." She also said the company falsely claimed that she was a U.S. citizen.

In their lawsuits, the Kinneys have accused a series of defendants of conspiring against them to take their home, including one they accuse of being in cahoots with a developer. Wheeler, the mayor, promised the family that authorities would not raid the home if the barricades surrounding it were taken down by Monday night.

"This agreement is an important step toward de-escalation and a long-term resolution for the neighborhood and the Kinney family," the mayor said in a statement. "I maintain measured optimism that we can accomplish this step and move toward the next steps to advance the safety and well-being of the family and the safety of the neighborhood." 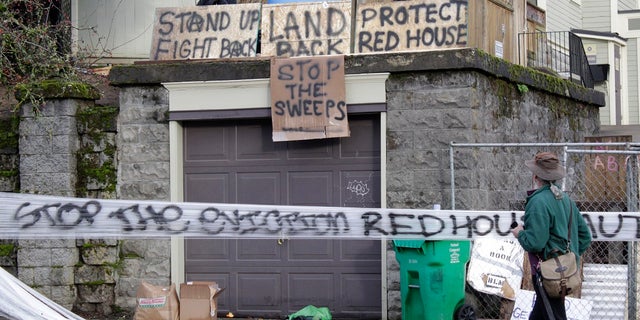 Masked protesters by an occupied home speak with a neighborhood resident opposed to their encampment and demonstration in Portland, Ore., on Dec. 9. Makeshift barricades erected by protesters are still up in Oregon’s largest city a day after Portland police arrested about a dozen people in a clash over gentrification and the eviction of a family from a home. (AP Photo/Gillian Flaccus)

In a possible de-escalation of the situation, the real estate investor who now owns the house has offered to sell it back to the former owners at cost, The Oregonian reported Friday.

"We are a small family business. We don’t seek to hurt anyone of course," said Roman Ozeruga, a real estate investor who bought the home at a foreclosure sale in 2018 for $260,000. "We’ve already offered to sell back the property at cost because of course we’ve paid taxes, legal fees, bank fees, etc."

END_OF_DOCUMENT_TOKEN_TO_BE_REPLACED

END_OF_DOCUMENT_TOKEN_TO_BE_REPLACED
Recent Posts
We and our partners use cookies on this site to improve our service, perform analytics, personalize advertising, measure advertising performance, and remember website preferences.Ok