New Delhi: Under a rain-slick tarpaulin, a half-dozen elderly women bake roti on a wood-fired griddle — flattening dough, flipping browned bread from dawn until the sun retreats into Delhi's evening smoke. Anyone who walks in gets served rice and cooked vegetables and, to wash it down, a cumin-flavoured yoghurt drink.

Across the road, Jagjeet Singh, a burly man with a large fanny pack and a light purple turban, churns a hefty pot of milk coffee from 5am to 5pm In the evenings, Singh switches to hot milk spiced with turmeric and cloves — good for the cold, good for the day's exhaustion. He goes through about 260 gallons of milk daily.

"Now, this is coffee," he said as his pot came to a boil and he leaned over it for a sniff. "You can even smell it from a helicopter!" 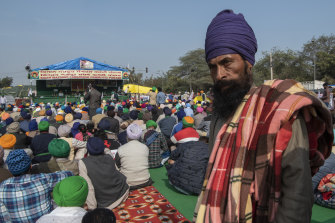 A man participates in a farmers protest in Singhu, bordering Delhi, India. Farmers are demanding the repeal of efforts to liberalide the agriculture market. Credit:Saumya Khandelwal/The New York Times

Music, games and free stuff, from fried snacks to thermal underwear to bottles of almond hair oil, can be found at every corner. But the scenes stretching for miles around the Indian capital do not come from a fair. They make up one of the largest sustained protests the country has seen in decades, persisting through steady rains and dozens of deaths that farmers and the Indian media have attributed to the weather, illness or suicide.

For six weeks now, tens of thousands of farmers have choked the city's four main entry points. They are challenging Prime Minister Narendra Modi, who has crushed all other opposition and stands as the country's dominant political force, over his effort to reshape how farming in India has been done for decades. The protests have snarled business across northern India at a time when the country's economy is already ailing. 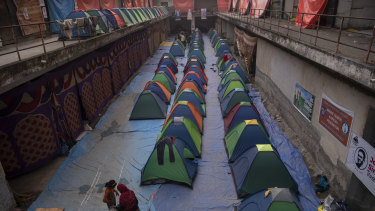 Donated tents to shelter women line the floor of a vacant commercial complex in New Delhi. Protesters have created camps around Delhi that are virtual cities unto themselves, using donations and their own organisational skills in their battle against new government farm policies.Credit:Saumya Khandelwal/The New York Times

The protesters are demanding that Modi repeal recent farming laws that would minimise the government's role in agriculture and open more space for private investors. The government says the new laws will unshackle farmers and private investment, bringing growth. Farmers are skeptical, fearing that the removal of state protections they already consider insufficient will leave them at the mercy of corporate greed.

"They sold everything else. Only the farmers are left," said 18-year-old Ajay Veer Singh, who has been at the protest with his 67-year-old grandfather since it began in November. "Now they want to sell the farmers to their corporate friends too."

In Singhu, a village about 40 kilometres from central Delhi where Singh has been camped out, there was no sign that the protesters were tiring. In between rain showers, which significantly worsen the impact of winter temperatures dipping below 50 degrees Fahrenheit, young protesters tried to drain puddles as the elderly sought to stay dry. At night, they curled up in the back of their covered trucks, or by the hundreds in large, often leaking shelters.

The farmers have turned a stretch of highway into the site of a well-organised community. Many of the farmers are Sikh, and they said their beliefs and sense of tradition had helped them make the sacrifices to sustain the protests.

The protesters, which one leader estimated at about 50,000, have organised a rotation to ensure their numbers do not shrink. When protesters tire or fall sick, they often arrange for replacements from their village before they leave the site. 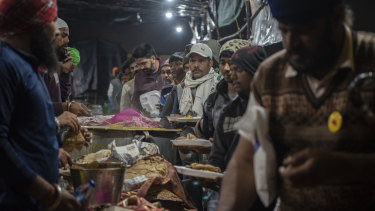 People line up for free food at the farmers protest in Singhu on the border with Delhi.Credit:Saumya Khandelwal/The New York Times

Singh said about 5000 people alone from his village of 14,500 in the Faridkot district of Punjab had joined the protest, nearly 1000 of them women. Asked if he was nervous about his grandfather falling sick or getting infected with the coronavirus, he smiled.

"My grandfather doesn't fear corona," he said. "He fears for our future."

The protests have laid bare the dire reality of inequality across much of the country.

More than 60 per cent of the 1.3 billion population still primarily depend on agriculture for their livelihood, though the sector accounts for only about 15 per cent of the country's economic output. Their reliance has only increased after COVID-19 badly struck the urban economy and sent millions of labourers back to their villages. For years now, debts and bankruptcies have been driving farmers to high rates of suicide. 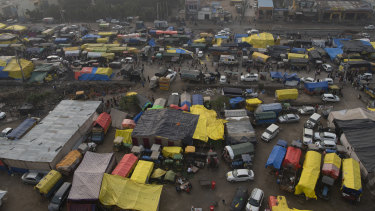 An aerial view of the farmers protest camp on the Singhu border with Delhi, India, on Friday.Credit:Saumya Khandelwal/The New York Times

Government support to farmers, and regulation of the market, with guaranteed minimum prices for certain essential crops, helped the country move past the dire hunger of the 1960s to producing a surplus of grain in recent years. But with the economy being liberalised in recent decades, Modi — who wants to see it to nearly double in size by 2024 — sees such a large role for the government as no longer sustainable.

Farmers, however, say they are struggling even with the existing protections. They believe market-friendly laws will eventually eliminate regulatory support and leave them bereft. India's weakened economy offers them little chance at a different livelihood.

"The laws are a shoddy attempt at liberalisation. You just enacted them without thinking of farmers," said Vikas Rawal, a professor of economics at Jawaharlal Nehru University in New Delhi who studies agrarian distress. "What you have to do is make farming remunerative for farmers by achieving a balance between public support, private investment and ecological concerns."

At first, Modi's government tried to paint the protesters as misguided, stoked by bitter opposition or even foreign hands — a tactic used against previous waves of demonstrations. More recently, the administration's willingness to negotiate suggests it finds itself against a highly organised and motivated movement.

As several rounds of talks failed, the farmers have threatened to drive their tractors into the capital. Modi's ministers have offered concessions on some issues, such as exempting farmers from penalties under a new air pollution law. But the farmers insist on nothing short of repealing the laws and enshrining minimum prices.

With each passing week, the farmers said, they are growing embittered against a government that is holding fast while protesters gather in the elements amid a pandemic. Protest leaders say about 60 of their ranks have died from illness or suicide, though an exact figure could not be determined.

"I have just one message for him," Harjinder Singh, 48, a ninth-generation farmer, said of Modi: "'Fear God'."

Despite the difficulties, the protesters have found ways to rally support. Some have built elaborate stages, big and small, throughout the tent city in Singhu, where farm leaders and politicians can hold rallies. During breaks in the speeches, organisers read the list of the latest donations from across India and the world. There were also gifts sent by farmers from other parts of the country, from pineapples to almonds. 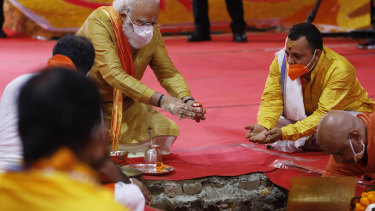 Tech-savvy protesters disseminate videos and photos across social media to keep the crowds back in the villages energised and to keep the donations coming.

Up and down the protest row, music blares from the sound systems installed on the tractors and seeps from the openings of the many tents. In one corner, a makeshift gym was established before it was turned into a "farmers mall" by an aid group offering free essentials like toothpaste, thermal underwear and soap for bathing and for laundry. In several spots, there are even laundry stalls with washing machines.

Volunteers at medical tents take care of minor illnesses — paracetamol for headaches, amlodipine for blood pressure. "Diabetes is the worst," said Manisha Sharma, 27, a paramedic who attended one medical tent.

Despite the size of the crowd and the chaos of so many people surviving in the cold and mud, the protesters try to stay calm, wary of provocations that might give the government a pretext to discredit the movement or crack down in the name of law and order.

"Last night, we caught a young local who had stolen a mobile phone," said Harjot Singh, a protester who was helping serve rice at one of the food tents. They let him go without punishment, he added.

In interviews, many of the Sikh protesters portrayed farming and their fight for justice as a duty, and the sacrifice and organising that has made the protests possible as religious service.

"It's cold, and it's hard to arrange water every morning for a bath," said Shabek Singh, who was dressed in a deep blue robe and a big round turban. "But we're not going anywhere. We will make this our temple."

END_OF_DOCUMENT_TOKEN_TO_BE_REPLACED

END_OF_DOCUMENT_TOKEN_TO_BE_REPLACED
Recent Posts
We and our partners use cookies on this site to improve our service, perform analytics, personalize advertising, measure advertising performance, and remember website preferences.Ok