Councils in Melbourne’s north-west have banded together to call on the Victorian government to upgrade the Calder Freeway as congestion worsens.

Brimbank mayor Ranka Rasic, whose council is leading the campaign, said the freeway needed works between the M80 Ring Road and Gap Road in Sunbury to safely accommodate the growing population in Melbourne’s fringe. 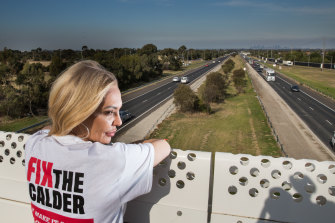 The council has written to Roads Minister Ben Carroll, calling for at least a $50 million commitment to match funding from the federal government.

Councillors, Sydenham MP Natalie Hutchins and residents met at the Keilor Golf Club last Saturday to launch the “fix the Calder” campaign, with a petition that so far has 180 signatures.

Hume mayor Joseph Haweil – who was at the campaign launch, along with Melton mayor Kathy Majdlik – said an upgrade was “much-needed”.

Russell Mowatt, president of the Calder Action Group, welcomed the renewed push from councils as the growing population adds pressure on the freeway.

“You’re getting more and more traffic congestion, accidents, and that’s the only way people can go to the city, through the Calder, and you’re putting people at risk,” he said.

Mr Mowatt, a former councillor in the Macedon Ranges who now lives in Ballarat, was hospitalised with his daughter after his car was hit on the freeway in 2012.

The federal government committed $50 million for the Calder ahead of the 2019 election, which was matched by the Labor opposition, to build extra lanes between the M80 Ring Road and Gap Road in Sunbury.

“The project is currently in the scoping and development phase, which involves investigating the investment priorities and benefits for upgrades along the corridor. A delivery schedule will be determined as part of this phase in consultation with the Victorian government,” a spokesman for the federal Department of Infrastructure said. 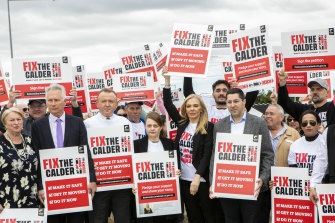 Brimbank mayor Ranka Rasic, councillors from across Melbourne and residents join together at the Calder Freeway to launch the campaign last Saturday.Credit:Brimbank Council

Brimbank Council also wants a full diamond interchange at the intersection with Calder Park Drive, extra lanes between Keilor Park Drive and Melton Highway, and the widening of the Maribyrnong River Bridge.

“Some sections of the Calder in Brimbank have no emergency stopping lanes and the speed limit changes from 100 kilometres to 80 kilometres per hour. That causes significant safety issues and extensive delays on the roads,” Cr Rasic said.

Council said there have been 81 crashes on the freeway between the Ring Road and Gap Road in Sunbury between 2015 and 2019. Four people died and more than 100 were injured.

Cr Rasic said tens of thousands of homes were being built, saying “this area is developing all the way to Melton”.

“Imagine congestion in a few years. Already we have that ongoing issue but in two years it will be even worse.”

A report by Infrastructure Australia in 2019 said the freeway would be Melbourne’s second-most congested road by 2031 during the morning commute, when 72 per cent of travel time would be a result of congestion.

The freeway would be the fourth-most congested overall when looking at the total number of delayed hours during the morning and evening peaks.

The Victorian government is spending $20 billion on 25 transport projects in the west, a spokeswoman said.

”Much work has already been carried out in the City of Brimbank as part of the $2.2 billion M80 Upgrade to widen the freeway, while level crossing removals including at Gap Road, and the recent installation of traffic lights on Green Gully Road and Arundel Road in Keilor is helping to alleviate congestion in the area,” she said.

The level crossing at Gap Road in Sunbury is being removed, the fourth to be removed on the Sunbury line with another four remaining, including at Calder Park Drive.

The government contacted 16 councils, including Brimbank, in March this year to review priorities on the Calder Freeway, Western and Hume highways.