Home » World News » Flight attendant: I was fired for posting pic of Trump in KKK hood

Flight attendant: I was fired for posting pic of Trump in KKK hood

A black Delta Airlines flight attendant says that she was canned after posting a cartoon image depicting ex-President Donald Trump in a Ku Klux Klan hood.

That’s according to a new lawsuit that was filed in a Georgia district court last Monday. The flight attendant in question, Leondra Taylor, was fired in April 2021.

She originally posted the image in September 2020 following the first presidential debate between Trump and President Joe Biden prior to that November’s election.

The cartoon, that first appeared in the Montreal Gazette, depicts moderator Chris Wallace telling Trump: ‘Thank you Mr. President, for wearing your mask.’ The former The Apprentice host is shown clad in a KKK hood.

That was the infamous debate in which Trump told the alt-right group the Proud Boys ‘to stand back and stand by.’

Taylor shared the picture on her personal Facebook page, reports CNN. The lawsuit argues that Taylor was let go after being ‘discriminated against [her] because of her race.’

It is unclear who brought the meme to Delta bosses attention, and no further details of the disciplinary process that led to Taylor’s firing have been shared. 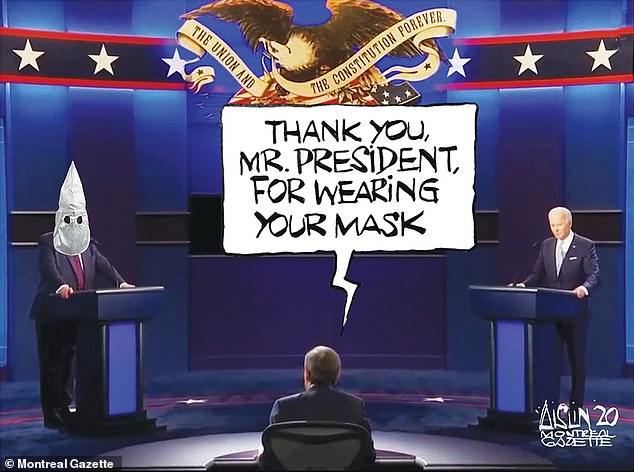 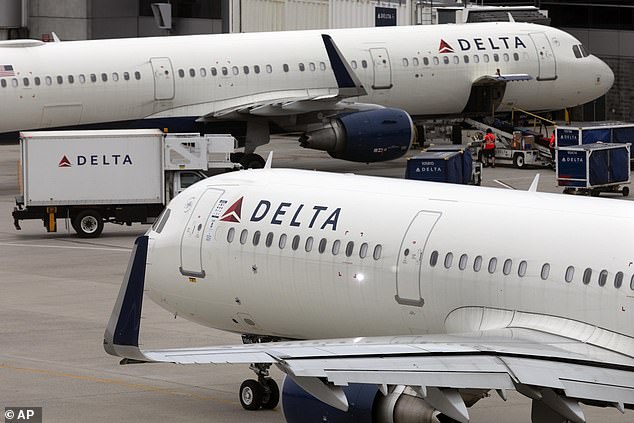 Delta is the only major US airline where flight attendants are not unionized. Leondra says her firing was in part a retaliation for her helping another flight attendant who was fired

The lawsuit makes reference to a white co-worker who also posted political messages on their social media page but was not fired.

Delta is the only major US airline where flight attendants are not unionized.

In addition to the allegations of racial bias, Taylor said that she was also being singled out because of previous incident in which she aided another flight attendant who was fired over her use of social media.

According to the lawsuit, Taylor alleges that Delta began studying her social media activities after she helped out her former colleague.

The former flight attendant alleges that she was making a political statement but that it was not ‘hateful or discriminatory.’

The CNN report quotes the lawsuit as saying that the image ‘simultaneously made a statement about Trump’s denial of the need for COVID protective measures, and that racial discrimination against African Americans was a systemic issue starting at the top, with the then president.’

In January 2021, Taylor alleges that she was confronted by fellow Delta workers who told her that her Facebook posts were ‘unacceptable.’

In February, Taylor was told that she was going to be suspended as her ‘political posts were racially motivated,’ reports CNN.

Taylor is seeking damages for mental and emotional suffering, punitive damages and lost wages. The suit contends that Delta was ‘willful, malicious, intentional and deliberate’ in their treatment of Taylor.

In response to the suit, Delta says that Taylor was in violation of the company’s social media policies.

The Atlanta-based airline told Business Insider in a statement: ‘When Delta employees intermix Delta’s brand with conduct or content that does not reflect our values of professionalism, inclusion and respect, that conduct can result in discipline or termination.’

It continued: ‘While personnel issues are considered private between Delta and its employees, the circumstances described by our former employee are not an accurate or complete explanation of the company’s termination decision.’ 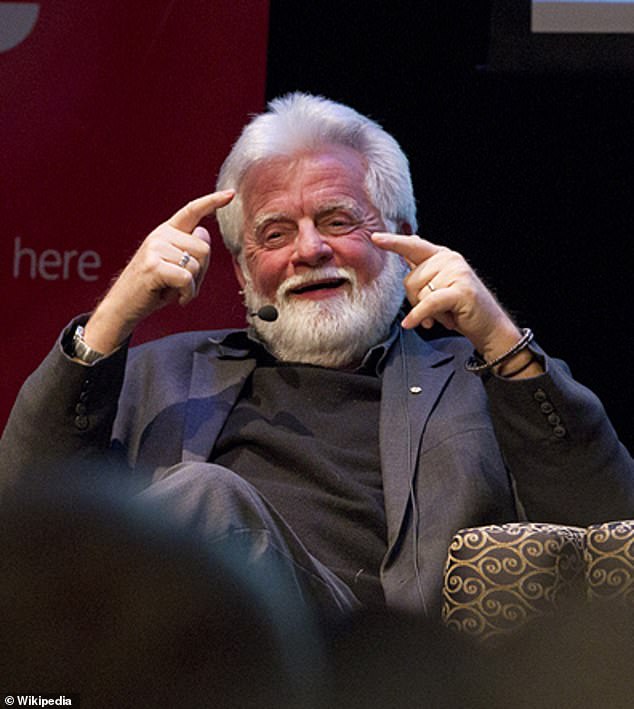 The artist behind the cartoon, Terry Mosher, tweeted about the lawsuit saying: ‘According to CNN, one of my cartoons is at the center of an America lawsuit!’

The artist behind the cartoon, Terry Mosher, tweeted about the lawsuit saying: ‘According to CNN, one of my cartoons is at the center of an America lawsuit!’

In his work, Mosher goes by the moniker Aislin.

Earlier in August, the Guardian reported that flight attendants at the company were attempting to gather signatures to force a ballot measure that will see employees vote on whether or not to join the Association of Flight Attendants-CWA.

An Atlanta-based flight attendant named Shemeka told the newspaper: ‘It’s taking the first step to make our workplace better, not only for me but for my fellow flight attendants, and the ones who follow.’

She added: ‘I would like to have a seat at the table when it comes to negotiating my work group, my compensation, my work-home balance, and the only way to accomplish this is to bring our collective power to the bargaining table.’