This is the shocking moment a driver smashed a car bonnet with an axe during a furious road rage row on a one-way street.

Company director Marcillo Sarr, 45 has avoided jail after initially hurling his axe at a windscreen during an argument a judge branded ‘worthy of a TV sitcom’.

Footage posted online shows the second half of the argument, when Stephen Bradley, 32, had the axe after wrenching it out of his smashed up windscreen.

The so-called ‘Battle of Sherratt Street’ started when Sarr accidentally turned the wrong way down the one-way road in Ancoats, Manchester City Centre, in his Citroen hire car.

He was met by Bradley travelling the correct way, but refused to acknowledge his mistake – which sparked the row.

Company director Marcillo Sarr (pictured leaving court), 45 has avoided jail after initially hurling his axe at a windscreen during an argument a judge branded ‘worthy of a TV sitcom’ in Manchester city centre

The pair both got out of their cars and initially argued about right of way. As shocked passersby looked on, Sarr ‘saw red’ and threw a ‘childish’ temper tantrum, a court heard.

He grabbed the axe from his vehicle in a fit of fury and hurled it at the windscreen of Bradley’s Vauxhall Astra as his partner and young daughter cowered inside.

When Sarr got back in his car, Bradley slammed his foot on the accelerator with the axe still hanging from the fractured screen and rammed the Citroen back down the street. 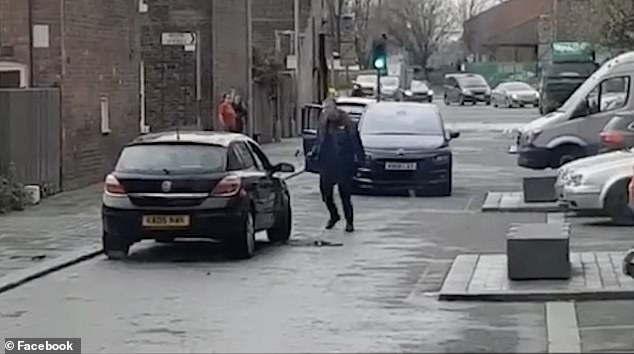 Footage posted online shows the second half of the argument, when Stephen Bradley (pictured), 32, had the axe after wrenching it out of his smashed up windscreen

Bradley got out of the car and pulled the axe from his windscreen. It is at this point a passerby pulled out his camera to capture video showing Bradley wielding the axe while Sarr squared up to him.

In a bout of fury Bradley slammed the axe into Sarr’s car bonnet before damaging other panels around the vehicle.

By the end of the video Bradley appears to strike Sarr with the axe which causes a ‘small injury to his hand’, according to the prosecutor.

At Manchester Crown Court, Judge Patrick Field QC condemned the feuding drivers but added: ‘If this behaviour had not been risky and dangerous it would have been almost comic.

‘Two grown men driving in opposite directions down a one way street and neither giving the other right of way. It is the stuff of situation comedy. 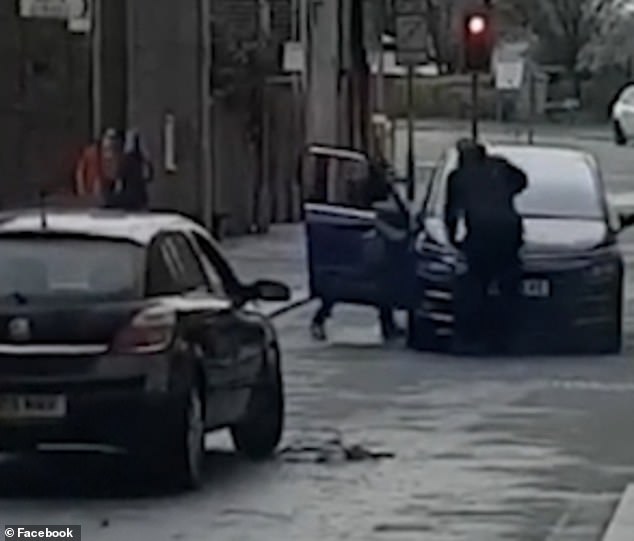 ‘This is a situation which should have been resolved in a peaceful and adult manner but ended up with a display of the most utmost disgraceful and shocking behaviour.

‘At one point I was tempted to call this behaviour childish, but I don’t believe a child would have behaved quite so badly.

‘You should be utterly ashamed of your high-risk, dangerous behaviour and you must be punished.’

The melee took place at noon on April, 3, 2019 during which members of the public filmed the violence on their phones.

Prosecutor Miss Fiona Clancy said: ‘Mr Sarr was driving the wrong way in a Citroen towards Mr Bradley who was in a black Astra with his partner, his young daughter and his partner’s brother inside.

‘They both stopped and a dispute began about right of way. They both left their vehicles and confronted each other. They were shouting at each other and were seen by members of the public, some of whom provided statements to the police. 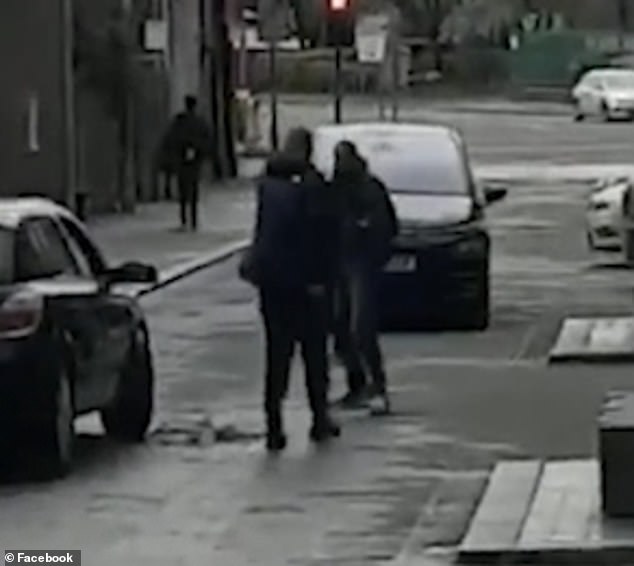 Bradley got out of the car and pulled the axe from his windscreen. It is at this point a passerby pulled out his camera to capture video showing Bradley wielding the axe while Sarr squared up to him

‘Mr Bradley returned to his car and a witness described Mr Sarr getting out of his vehicle brandishing an axe with a 1ft long black handle.

‘He moved towards Mr Bradley’s Astra and swung it into the windscreen and was said to be shouting, screaming and aggressive.’

Bradley’s partner and young daughter then got out of the car and ran away before Bradley drove the vehicle towards Mr Sarr with the axe lodged in its windscreen.

Miss Clancy added: ‘He then got out of the vehicle, took the axe from his windscreen and ran towards Mr Sarr’s Citroen, striking the bonnet with the axe.

‘Mr Sarr was not struck himself but received a small injury to his hand. Mr Sarr then returned to his vehicle and essentially drove it towards Mr Bradley who then drove away down a side street. Parts of the incident were captured on CCTV.

‘While Mr Sarr struck the Astra Mr Bradley’s partner and her young daughter were in the back trying to shelter from the glass. After various calls to police from members of the public Mr Bradley was arrested at the scene. 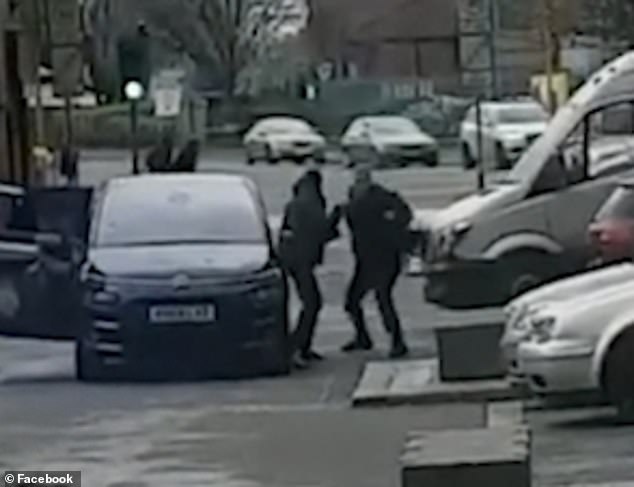 By the end of the video Bradley appears to strike Sarr with the axe which causes a ‘small injury to his hand’, according to the prosecutor

‘When interviewed by police he blamed Mr Sarr, and when Mr Sarr was arrested five days later and interviewed he said Mr Bradley was the one who produced the axe. He accepted damaging the vehicle in defence.’

In mitigation for Sarr, defence lawyer Joshua Bowker said: ‘The defendant accepts his behaviour was very angry and utterly unnecessary. He accepts he lost his temper and this behaviour was clearly out of character for him.

‘He has no real explanation to put forward about why he behaved in the way he did instead of just shaking hands with Mr Bradley but this was one of those days where he saw red and acted disgustingly poorly. He has an extremely impressive work ethic and he struggles to understand why he is here today being sentenced for a disgusting incident.’