The Australian Securities and Investments Commission issued a statement on Monday advising that Mr Zeidan had been disqualified because of his involvement in the failure of three companies. 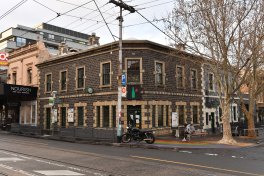 Creditors were left $2.3 million out of pocket, ASIC said. They included the Australian Taxation Office, which was owed more than $1.35 million.

ASIC based the disqualification on allegations that Mr Zeidan may have continued to trade while insolvent; failed to exercise his powers and discharge his duties with the degree of care and diligence required of a reasonable director; gained an advantage for himself or someone else; and failed to understand his duties as director.

Maurice Manno, who was Mr Zeidan’s business partner for more than a decade, and continues to run the Grace Darling, declined to comment.

The Grace Darling is Melbourne’s second-oldest pub. It was built in 1854 and is one of the few remaining Goldrush-era pubs left in the city.

The Age was unable to reach Mr Zeidan for comment. He is disqualified from managing corporations until July 2025.