Former home of Florence Nightingale on sale for £650,000

Furniture and paintings dating back to 17th century from country manor house once home to Florence Nightingale and where poet Lord Byron entertained his mistress go on sale for £650,000

Furniture and paintings dating back to the Georgian era from a country manor house home to Florence Nightingale and Lord Byron has gone on sale for £650,000.

Stand-out items at Kinsham Court in Herefordshire include an £80,000 satinwood commode and four paintings of the Arkwright family – who were influential in the industrial revolution – for £230,000.

Other lavish furnishings on the market are a Flemish 17th century tapestry depicting the Death of Alexander worth £8,000, an 18th century Meissen blue and white service expected to fetch £6,000 and a 300-year-old Verbruggen the Younger still life oil painting of flowers costing £18,000.

The contents will be sold through auctioneers Bonhams and have been split into 195 lots. 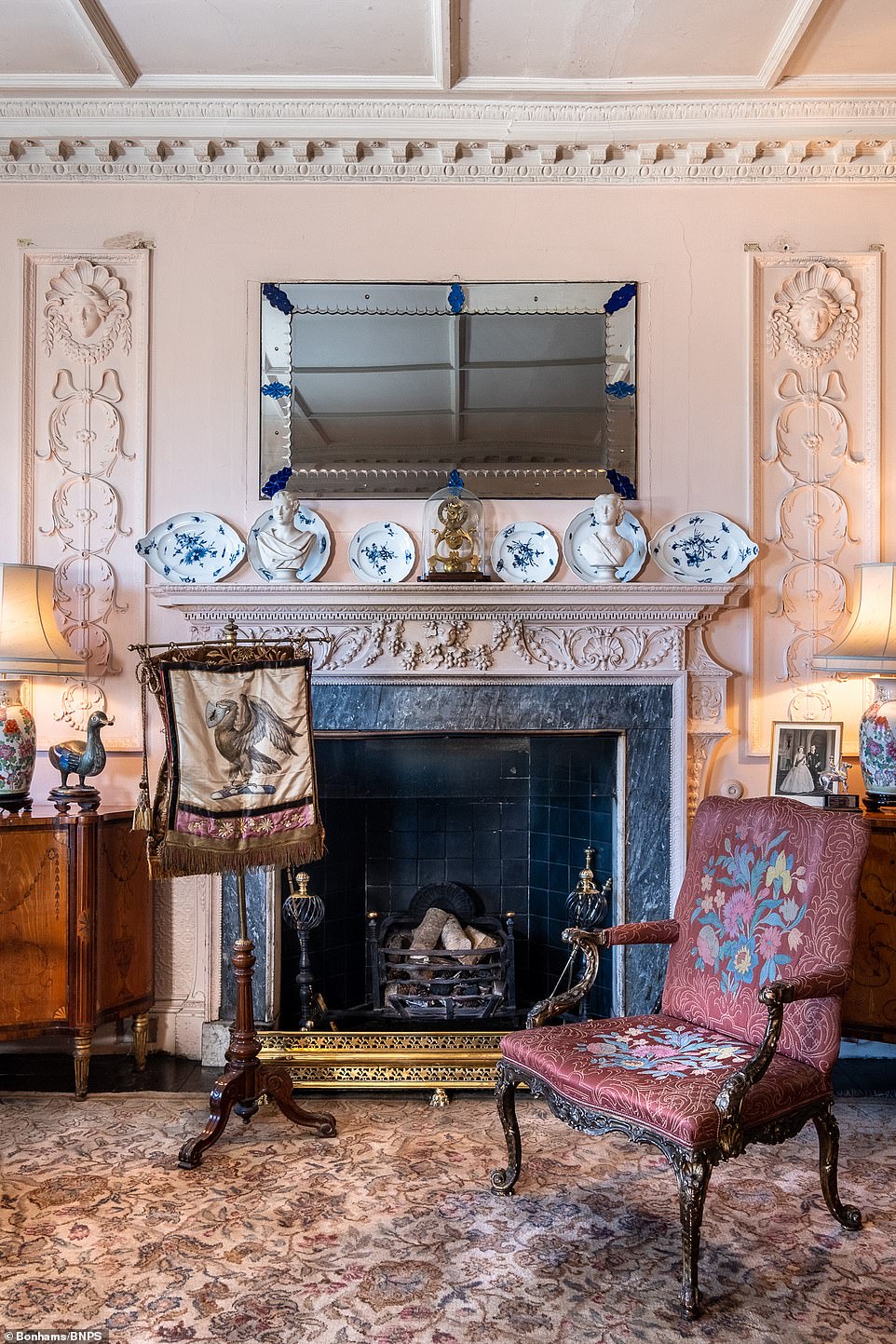 Pictured: A George II carved armchair valued at £3,000, a  brass skeleton timepiece valued at £600, a Venetian glass mirror valued at £1,000 and Victorian pole screen valued at £350 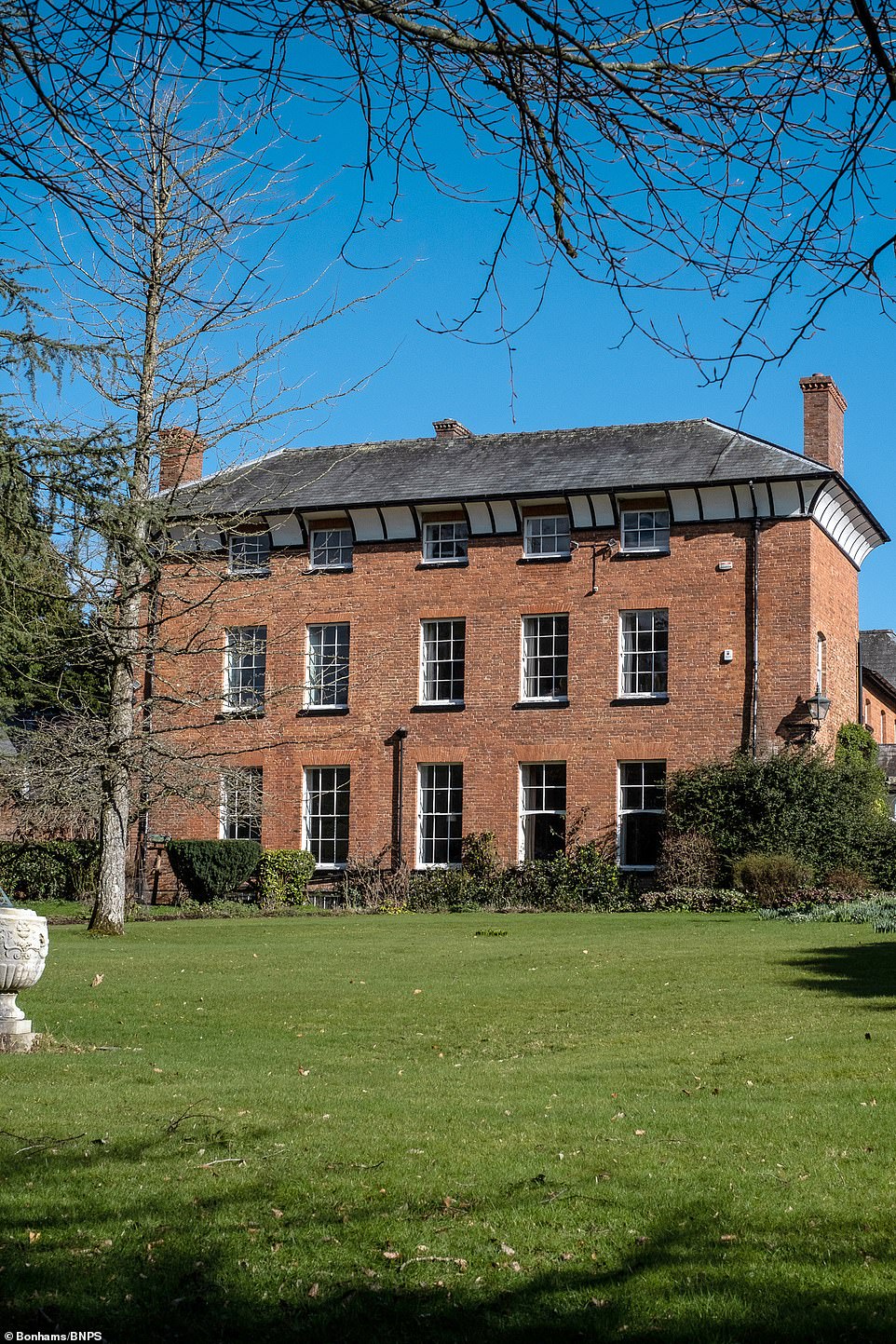 The elegant Georgian house (pictured) was home to historical figures including Lord Byron, while he was having an affair with his mistress, and Florence Nightingale, who lived their as a child 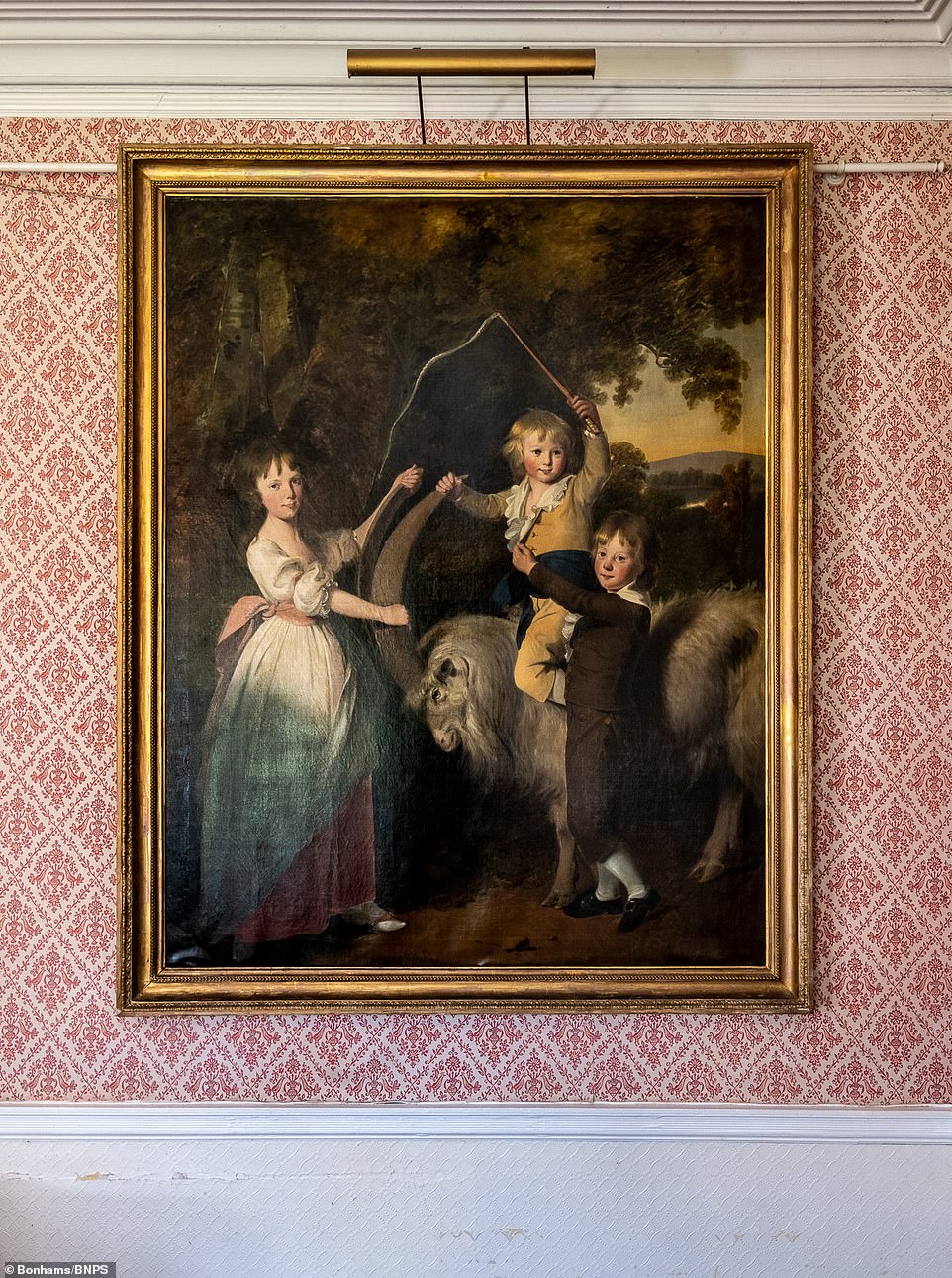 A portrait of Elizabeth, Charles and John Arkwright valued at £50,000. The Arkwright family played a major role in the industrial revolution, with Richard Arkwright being labelled as the ‘richest commoner in Europe’ 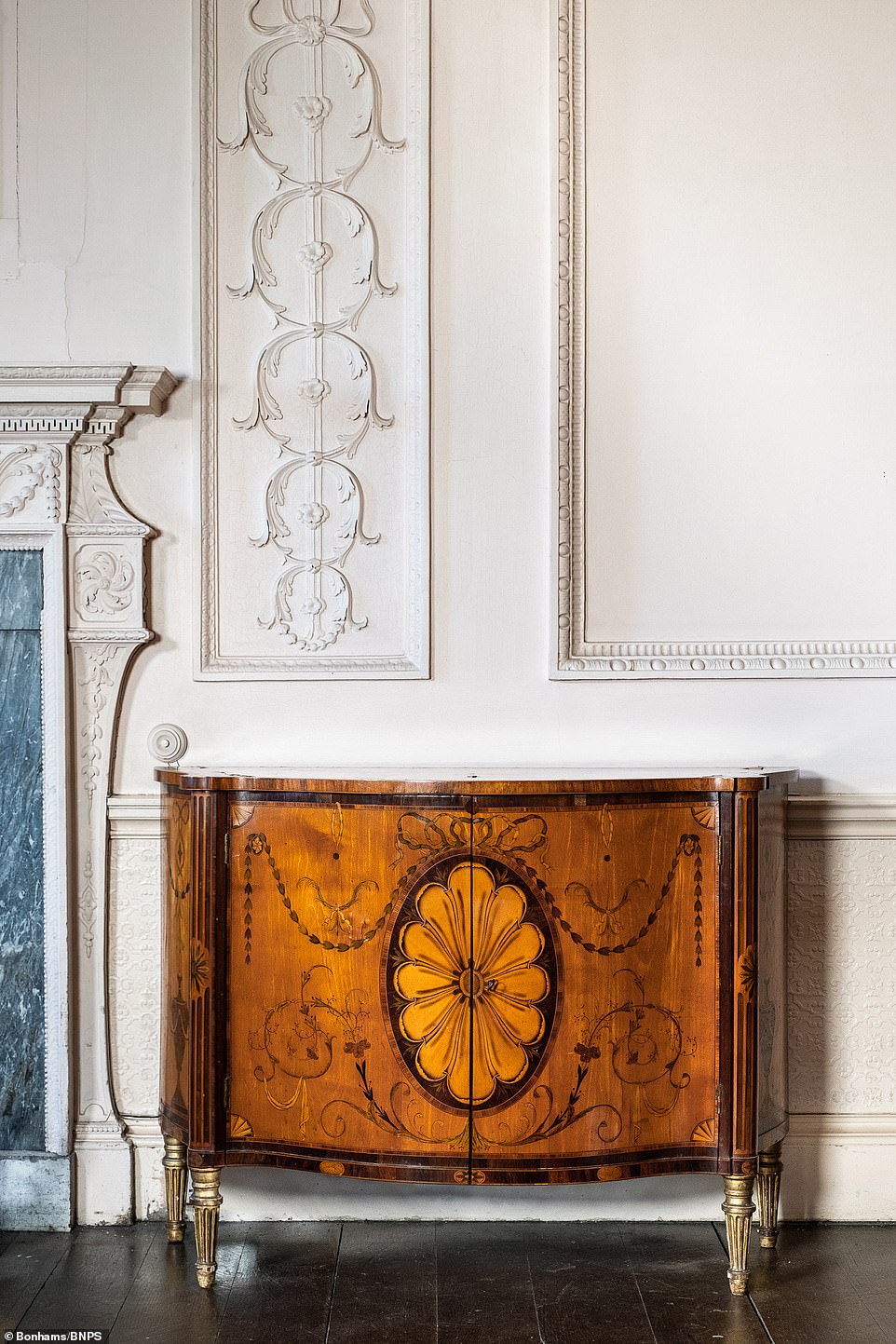 The sale includes a pair of George III commodes valued at £80,000. The contents will be sold through auctioneers Bonhams and have been split into 195 lots 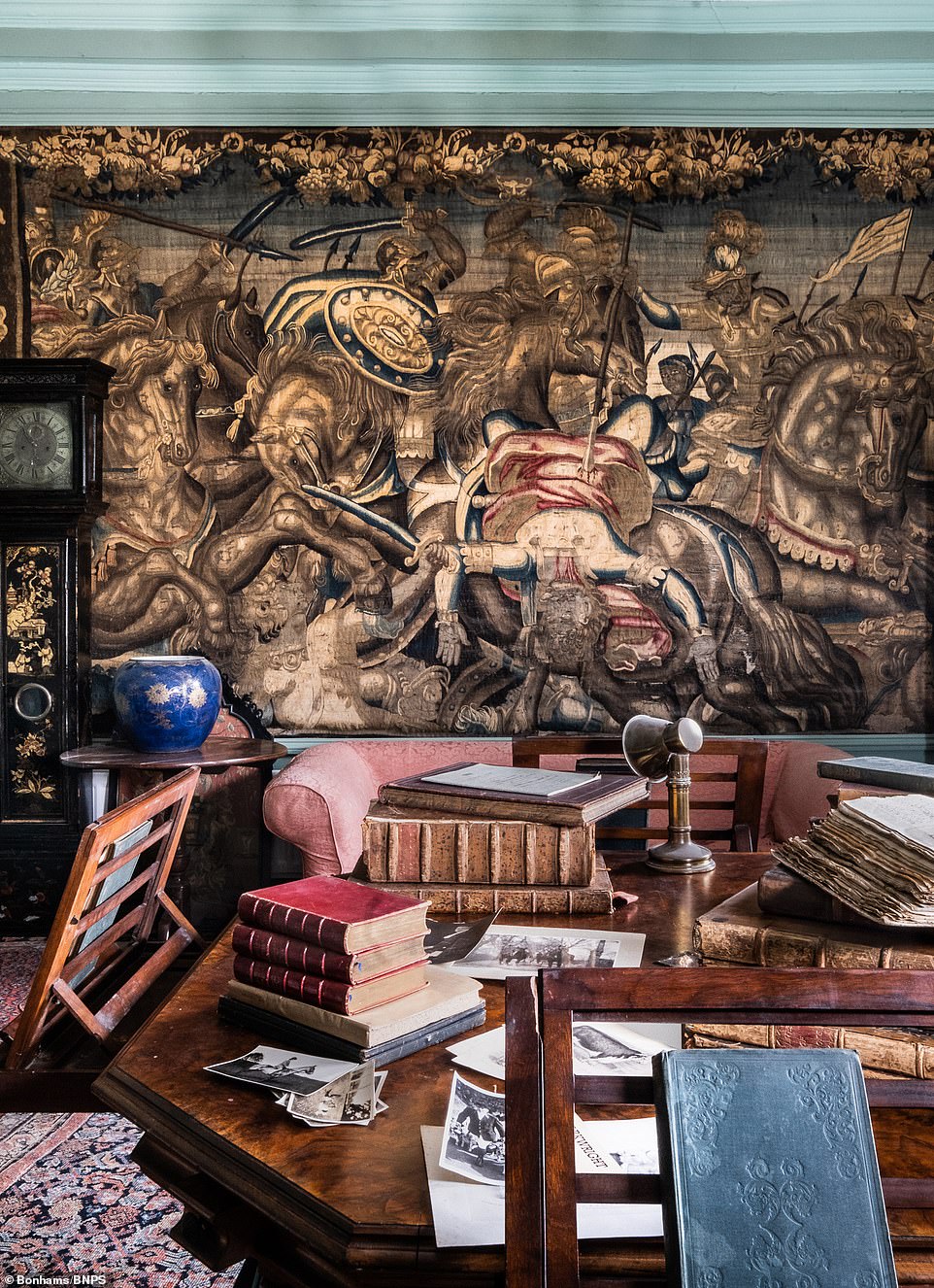 Books on an old table lie in front of a picture of the Death of Alexander which is expected to fetch for £8,000 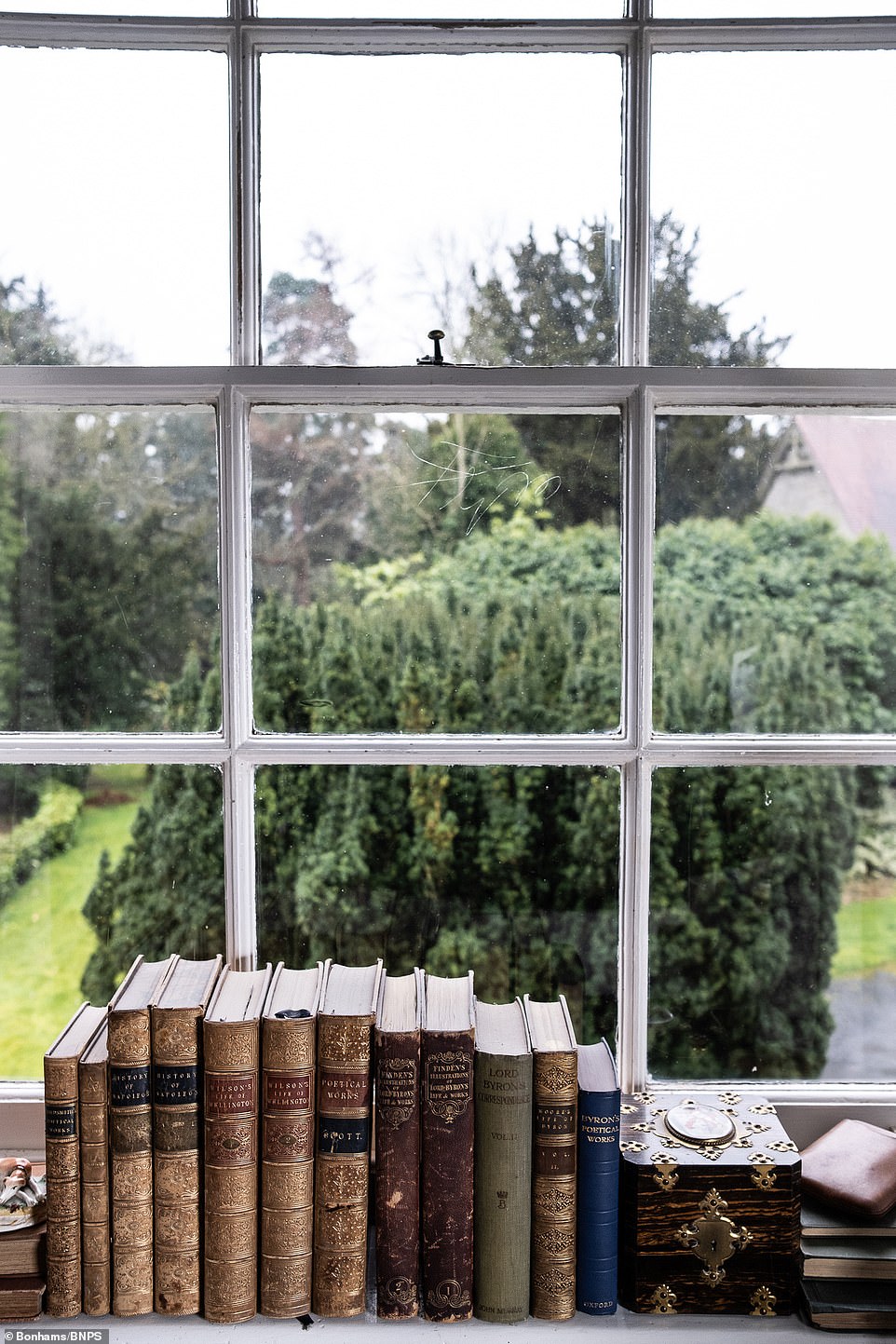 Lord Byron’s signature scratched into the window from his stay in 1813. He stayed at the house for a short time while he has having an affair with his mistress 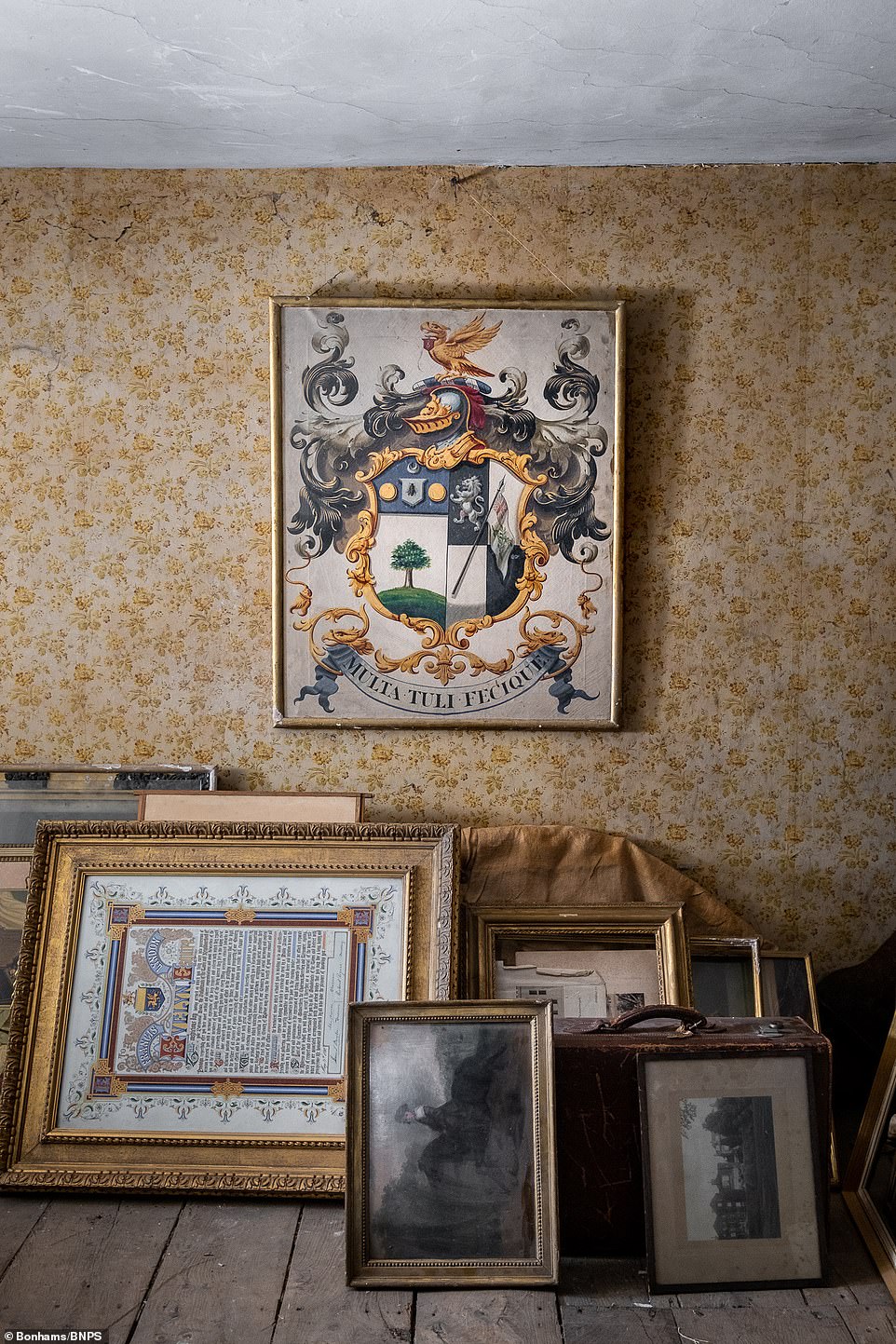 The sale includes Richard Akwright’s British Heraldic Crest valued at £1,500. Furniture and paintings have garnered a total price of £650,000 – double the typical cost of a home in Britain 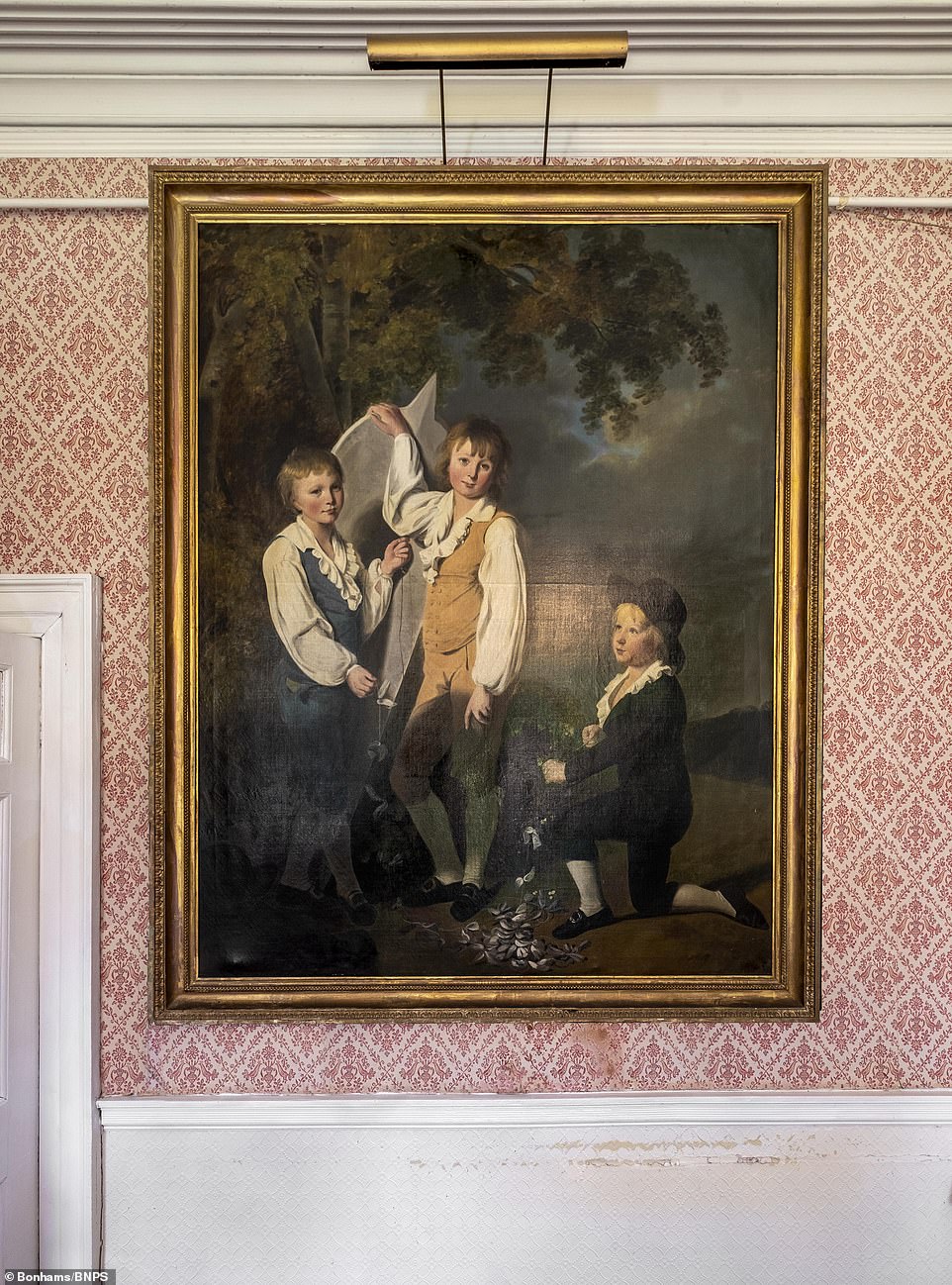 Pictured: The sale includes this Circle of Joseph Wright portrait of Robert, Peter and Richard Arkwright valued at £50,000 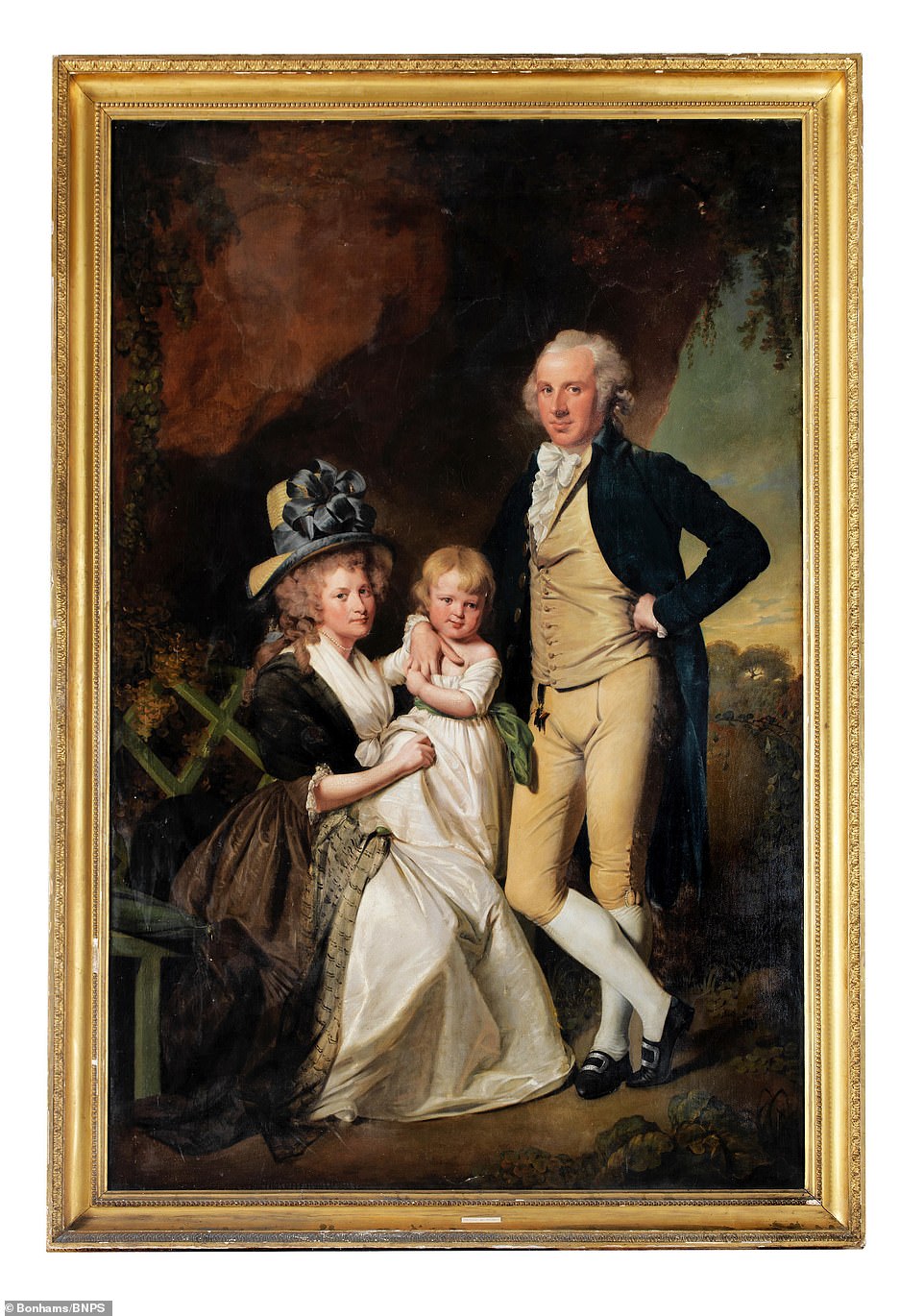 Valued at £70,000, this dazzling painting of the Arkwright family vividly illustrates Richard Arkwright Junior and his wife, Mary Arkwright with their child 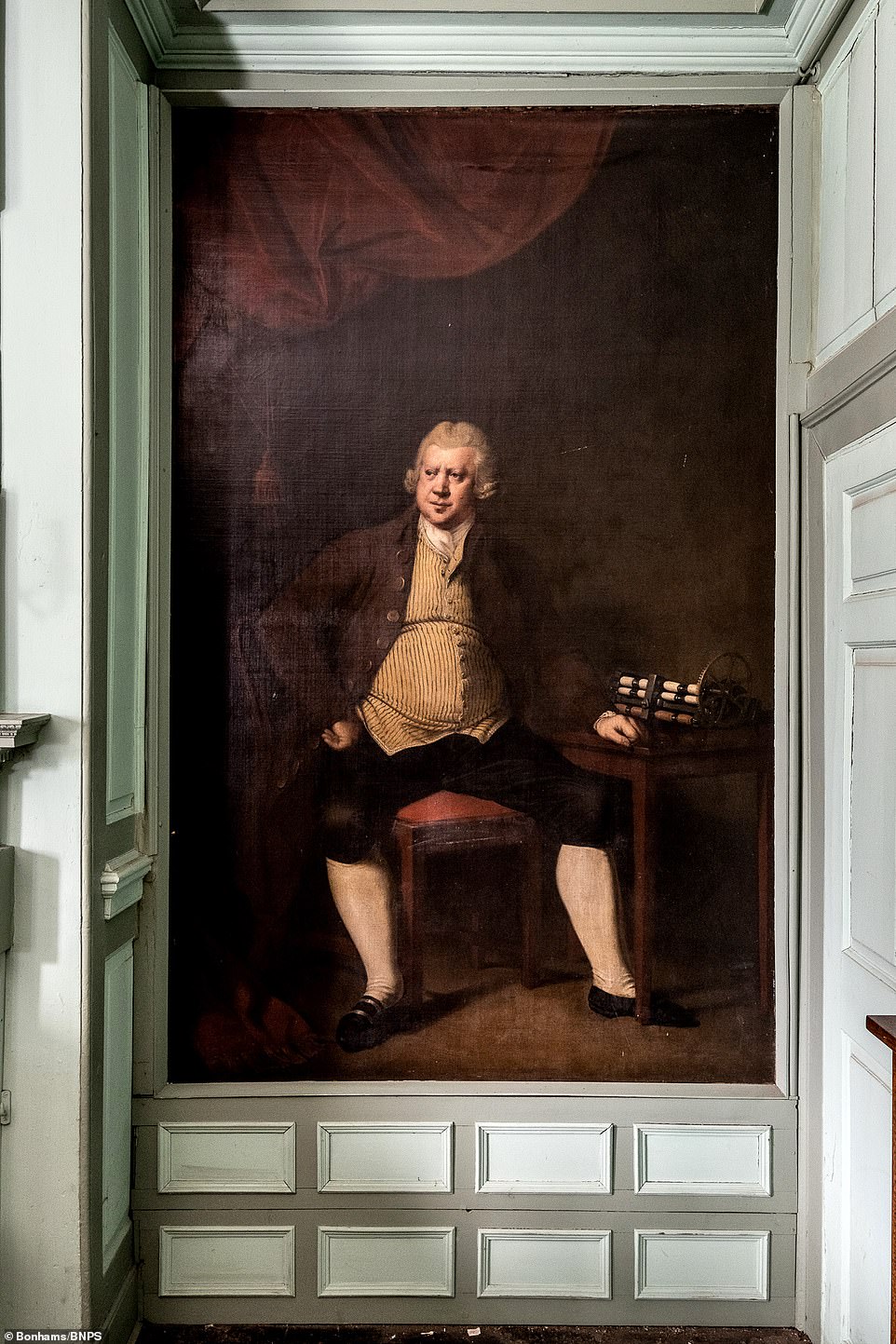 Sir Richard Arkwright, known as the ‘richest commoner in Europe’, was a 19th Century inventor from Preston and was instrumental in the industrial revolution. This painting of him (pictured) is on sale for £60,000 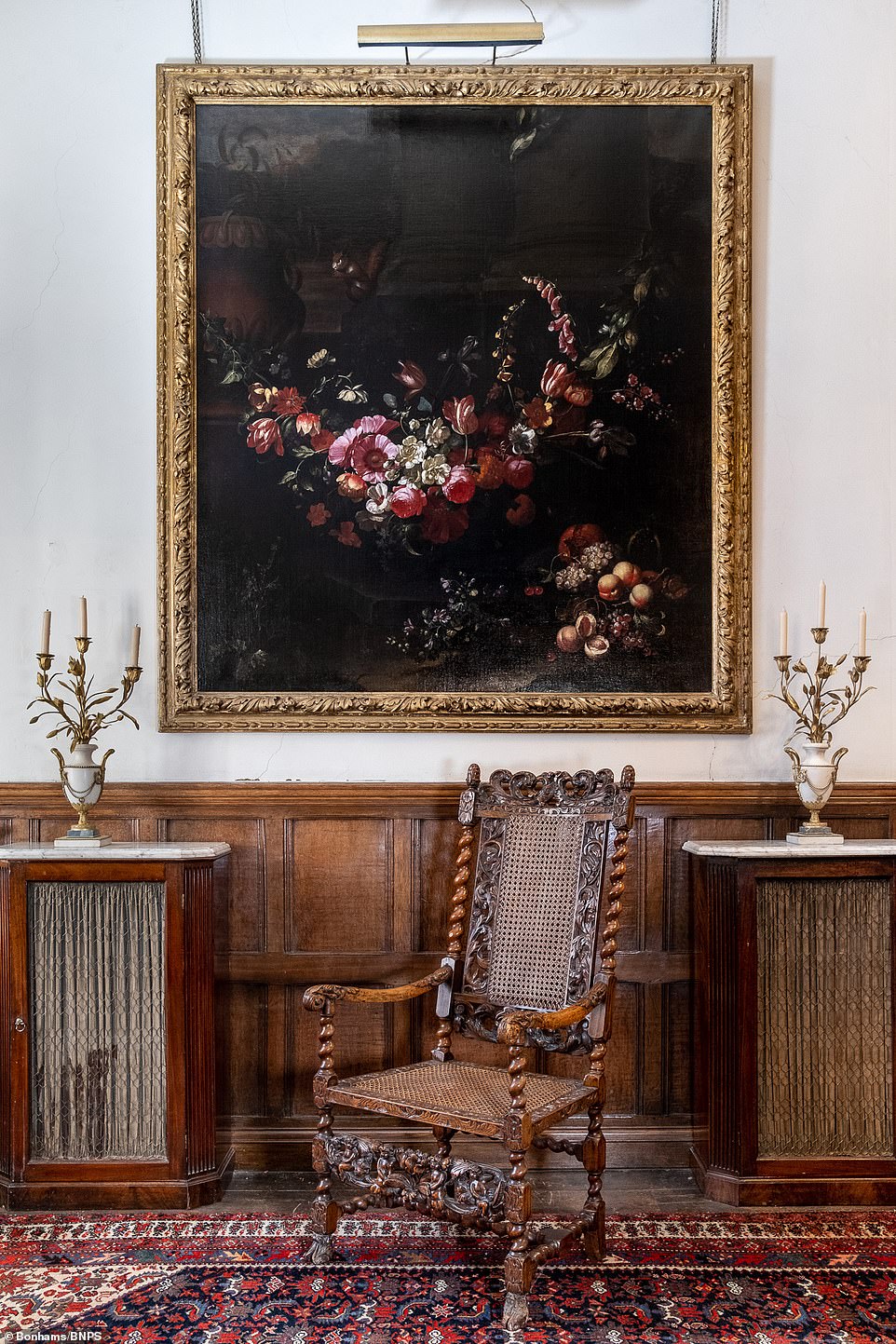 A 300 year old Verbruggen the Younger still life oil painting valued at £18,000, a pair of white marble and guilt metal candlesticks valued at £1,200 and a set of four Charles II carved walnut armchairs valued at £6,000

The Romantic poet Lord Byron rented the house for six months in 1813 while he was having an affair with Lady Oxford before leaving the property when his mistress and her husband moved abroad.

He is thought to have written part of Childe Harold’s Pilgrimage there and etched his name in the glass of an upstairs window.

Another famous tenant was Florence Nightingale who lived there with her family, although her father was not a fan of the house and described it as  ‘very picturesque but not very habitable’.

The main and longest owners of the property were the Arkwright family, a Northern family who played a major role in the industrial revolution.

Known as the ‘richest commoner in Europe’, Preston inventor Sir Richard Arkwright lived in the fancy abode with his family in the 1820s.

His grandson Jack was forced to move into the downsize and live in Kinsham Court in 1912 after falling on hard times during the Agricultural Depression.

Jack’s grandson David, who was the last surviving member of the direct family line, died in 1985 and passed it to Susan Wood.

She died in 2020, aged 102, and her son is now selling both the property and its contents.

Charlie Thomas, from Bonhams, said: ‘It is always a huge honour to be able to offer items which encapsulate such history.

‘This sale offers an unrivalled opportunity to acquire furniture and paintings dating back to the founder of the dynasty himself, including a sensitive group portrait of Richard and Mary Arkwright and family from the studio of Joseph Wright of Derby.

‘Most excitingly is that none of the contents have ever been on the open market before.’