Home » From tents to tin huts, with a song of Piaf – and no regrets

From tents to tin huts, with a song of Piaf – and no regrets

Music floated over lonely paddocks and across a stony landscape shaped by a volcano.

The old hall on nights like these felt very nearly as sophisticated as a city theatre.

A chorus line of young women kicked up a can-can; a swirl of colour and brief transportation to the naughty side of Paris.

Risque jokes bounced from tin walls. Songs from the stage musical, My Fair Lady, were sung and acted out in top hats and ballgowns. Music-hall skiffle rollicked. Does Your Chewing Gum Lose Its Flavour (On the Bedpost Overnight?) and There’s a Hole in the Bucket.

And then, floating, floating in as if from another world, came the voice of my aunt, aged in her 20s.

Hers was that rarest of classical female voices, the mezzo-contralto. Its range powered from the low notes and soared clear towards the heights of soprano. 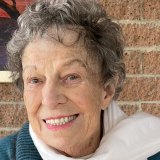 My aunt Pat, whose voice took young soldier settlers and their families to another world.

Members of the audience closed their eyes and allowed my aunt Pat’s voice to lift them to another place. Far away.

It was the beginning of the 1960s and the people of a little farming outpost with a strange name, Gerrigerrup, about halfway between Hamilton and Port Fairy in Victoria’s Western District, were holding a concert to raise funds for a tennis court.

Their concert proved so successful it went on tour around the district, and there was enough in the kitty at the end for two courts.

But it was more than this.

Gerrigerrup was a settlement for soldiers returned from World War II and their families. These were young, optimistic and hard-working people thrust off the beaten track.

Rivers of lava and basalt stones spat out by a volcano known as Mount Rouse, right alongside the village of Penshurst a bit to the north, meant much of the land was burdensome to farm.

Tiger snakes, browns and copperheads inhabited swampy flats and nested among the stones. Rabbits, until myxomatosis spread in the mid-1950s, colonised every ridge.

Young couples lived in breezy huts before their weatherboard homes were built, learning to live with chilled rain, wind, baking summer days and the snakes. Money, often, was scarce. 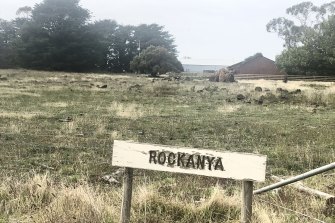 On the stony landscape of Gerrigerrup, a landholder chose a sense of humour to name their property.Credit:Tony Wright

Loneliness could creep in and wear away at such lives. But the families of Gerrigerrup set about building that thing that grants shared strength: community.

Their farms were carved out of a big, old pastoral station known as Kangertong, compulsorily acquired by the Soldier Settlement Commission in 1948.

The Kangertong building that had served as the shearers’ quarters was hauled across country.

It became the Gerrigerrup Hall, central to community life among the soldiers’ families.

And here was the home of the Gerrigerrup concerts.

Remoteness was forgotten and the warmth of community, music and the exuberance of the can-can banished all sense of loneliness. Yes, and my aunt’s voice took everyone away.

Soon enough, two tennis courts were built. On summer weekends, the entire community turned up to play and watch the competitions.

Women prepared great spreads for afternoon tea and the men — a lot of whom had fought together in the recent war — sat yarning, nursing long-neck bottles. 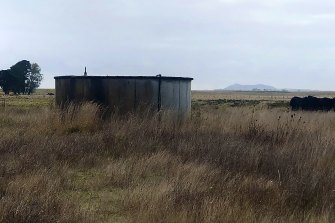 Where once stood the heart of a community – a hall and tennis courts – only a water tank remains, the volcanic upthrust of Mount Rouse in the distance.Credit:Tony Wright

A few weeks ago, my aunt Pat and I cruised through the morning in search of that past. We drove south from the Grampians past Penshurst and found a narrow road rolling through the stony country and lava ridges.

All these years later, we had trouble finding the old farm. The weatherboard house was long gone, hoisted on the back of a truck and taken away to form part of the Hamilton Golf Club.

The hall was gone, too. The tennis courts had disappeared. Only an old water tank stood on the site.

In the distance, the volcanic cone of Mount Rouse hunkered. A small plane, a crop duster, flew low over farms so strewn with stones that the only efficient way to tend them was from the air. 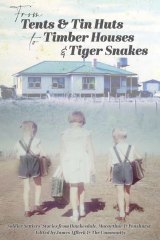 Those paddocks had bent crowbars and broken a lot of backs, and almost all of the original soldier-settler families and their offspring had sought out greener pastures decades ago.

There were numerous soldier settlements across Victoria, and writer and war historian James Affleck has made it his work to seek out the stories of those families who settled parts of the Western District.

His latest book, given the evocative title From Tents & Tin Huts to Timber Houses & Tiger Snakes, chronicles the lives of more than 130 families from more than a dozen soldier settlement estates bounded by the towns of Hawkesdale, Macarthur and Penshurst.

It is difficult now in this quiet landscape to imagine the hopes and dreams invested by those new families, and the population explosion that drove something of a boom in the villages in the 1950s and ’60s as their children were born and grew.

But as I revisited the old place with my aunt, now aged 91, I fancied for a moment that it was almost possible still to hear her voice floating, floating, over the stony paddocks.