Tesco customers have expressed outrage over the supermarket giant’s charity partnership scheme which sees the shopping bill rounded up to the nearest pound.

The money raised will be matched by the retailer up to £1.5 million and split between three charities.

However, some customers have complained that the donation is automatically been added to their bills without their explicit consent. 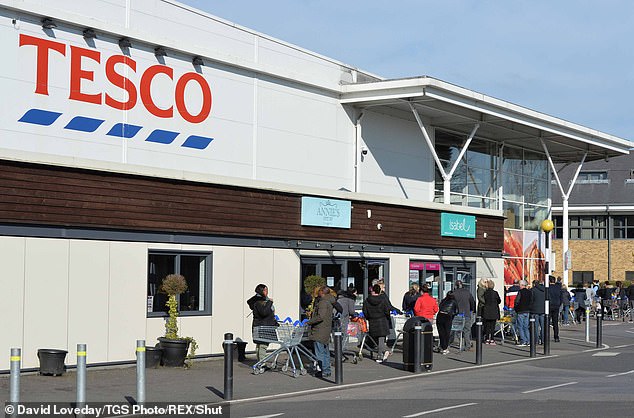 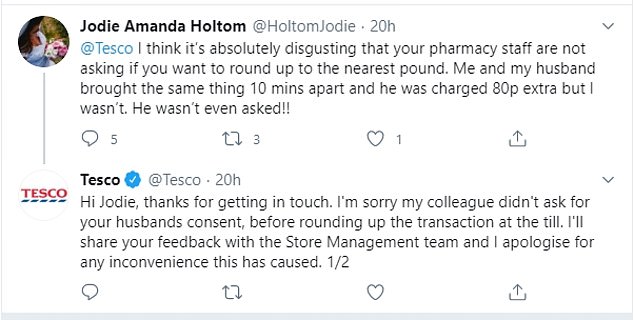 Jodie Holtom and her partner Jamie bought the same product in a Tesco pharmacy in Cheltenham within ten minutes of each other.

‘I know 80p isn’t a lot but times are hard at moment. He realised when we got home that he was charged more and said he was never asked about whether he wanted to contribute.’

Ms Holtom said she bought the same product from the same store after ten minutes and paid the price on the label.

Some social media users expressed outrage online over the donations.

A Tesco spokesperson told MailOnline: ‘To support our health charity partners at this critical time, we are encouraging our customers to round up the cost of their shopping to the nearest £1.

‘Customers will be asked if they would like to donate by one of our checkout colleagues when they pay for their shopping or on-screen if they are using a self-service till.

‘We also have signs in our stores letting customers know about the campaign and how they can support it.

‘The response to the campaign so far has been overwhelmingly positive with very few customers feeding back that they were not aware that they had made a donation.’

The money for the scheme is being divided equally between Cancer Research UK, British Heart Foundation and Diabetes UK. The three health charities have seen their income dramatically reduced during the Covid-19 epidemic as major fundraising events such as the London Marathon were cancelled.

According to Cancer Research UK, they have already had to slashed their planned spending on developing treatments for the disease by £44 million. In total, the charity expects its 2020 revenue to be cut by £160 million.

END_OF_DOCUMENT_TOKEN_TO_BE_REPLACED

END_OF_DOCUMENT_TOKEN_TO_BE_REPLACED
Recent Posts
We and our partners use cookies on this site to improve our service, perform analytics, personalize advertising, measure advertising performance, and remember website preferences.Ok