BERLIN/FRANKFURT (Reuters) – Andrea Nahles said on Sunday she would resign as the leader of Germany’s Social Democrats (SPD), raising new doubts about the durability of Chancellor Angela Merkel’s ruling coalition with the center-left party. 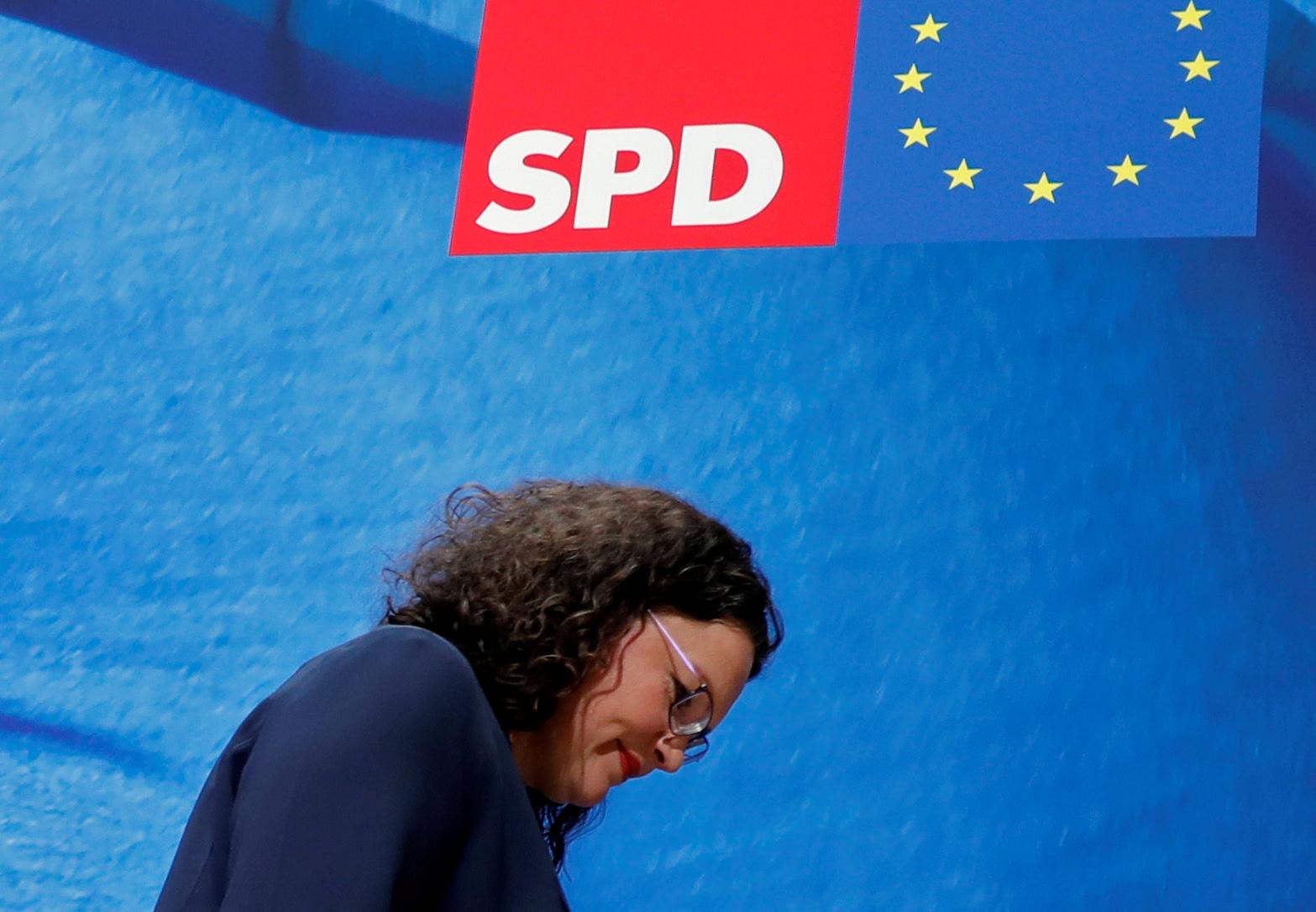 Nahles, whose SPD is a junior coalition partner in Merkel’s ruling alliance, said she would resign as party leader on Monday and step down as head of the SPD’s parliamentary group on Tuesday.

“The discussions within the parliamentary faction and feedback from within the party have shown me that I no longer have the necessary support to carry out my duties,” Nahles said in a statement released by the SPD.

The “grand coalition” is due to rule until 2021 but Nahles’ resignation could trigger the SPD’s early exit, forcing Merkel to call snap elections, to lead a minority government, or to seek an alliance with the Greens and liberal Free Democrats.

“The election for the party leadership is likely to be a vote on the grand coalition,” said Henrik Enderlein, president of the Hertie School of Governance in Berlin. “Whoever runs will have to answer the crucial question of whether to participate in the government.

“New elections later this year are not excluded,” Enderlein added. “A minority government at the end of the era Merkel could possibly be an interim solution.”

The turmoil within the SPD comes as Merkel’s conservative Christian Democratic Union (CDU) faces its own struggles.

Germany’s Greens have overtaken the conservatives to become the most popular party in Germany, an opinion poll on Saturday showed, with SPD support hitting an all-time low.

CDU leader and Merkel’s heir apparent Annegret Kramp-Karrenbauer called on the SPD to ensure Germany has a stable and functioning government.

“I am assuming that the SPD will make its personnel decisions quickly and that the Grand Coalition’s ability to act will not be impaired,” she said on Sunday.

Alexander Dobrindt, a lawmaker from the CSU Bavarian party in Merkel’s coalition, echoed her view. “I expect a clear commitment from the SPD to back the coalition,” Dobrindt said.

Nahles was due to face a vote on her leadership position on Tuesday after her decision to stay in coalition with Merkel’s conservative bloc following the European elections setback was criticized by the SPD’s left.

The SPD also failed to win the most votes in the state of Bremen for the first time in 73 years last Sunday.

Earlier, German Vice Chancellor Olaf Scholz, a Social Democrat, told Germany’s Tagesspiegel that he had ruled out entering another grand coalition as the SPD seeks to regroup after losses in the European parliamentary elections.

“I am very sure that it would not be justifiable for us to have a fifth grand coalition,” Scholz told the German paper in an interview published on Sunday before Nahles announced she would resign.

“Three grand coalitions in a row would not do democracy in Germany any good,” he was quoted as saying.

The ruling coalition is due for a midterm review in the autumn, which could be an opportunity for the SPD to pull the plug on the alliance.

The SPD is now scrambling to put an end to infighting to stabilize its leadership. 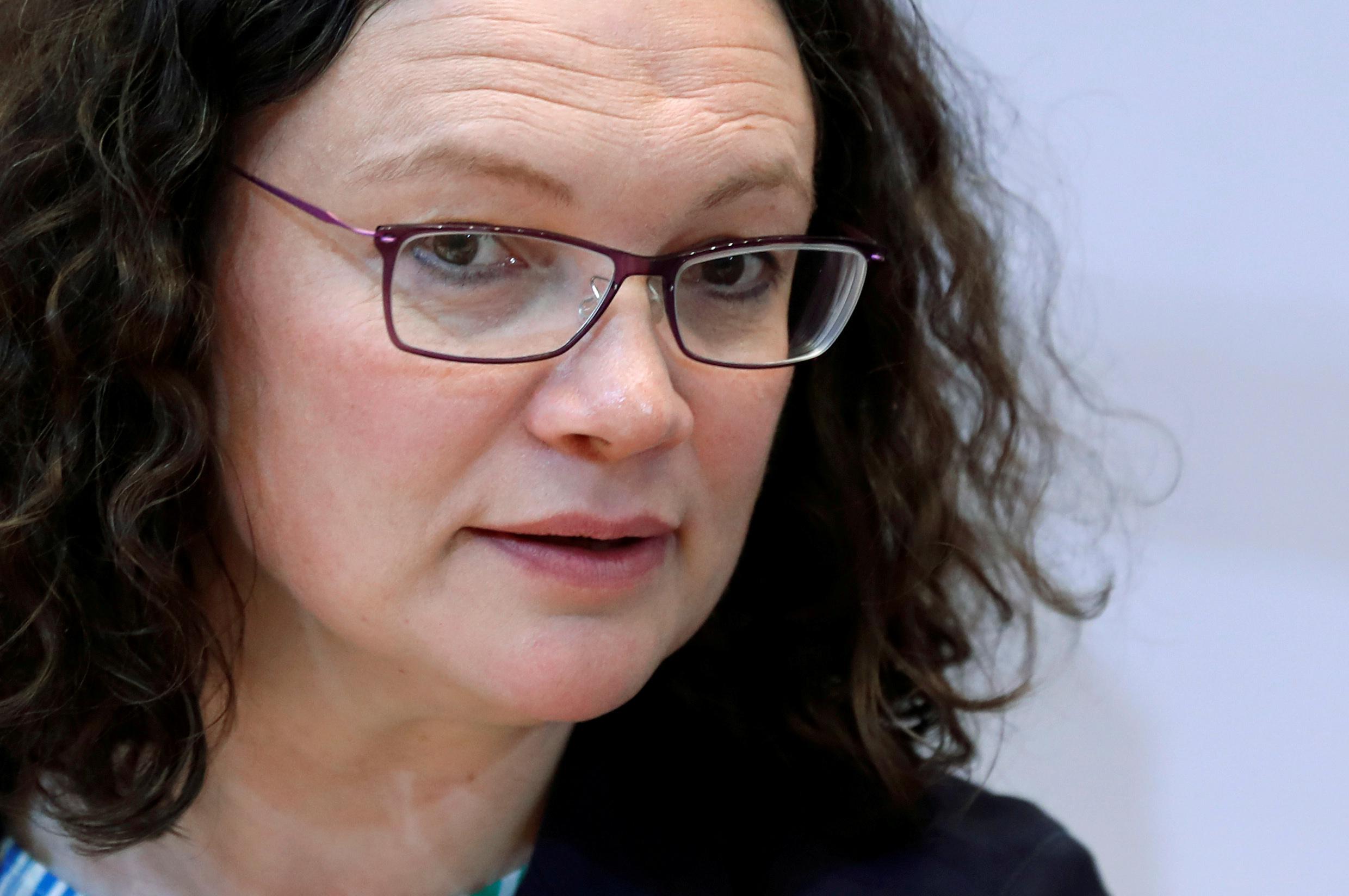 Schulz told Germany’s Welt am Sonntag newspaper that he would not stand against Nahles in the leadership vote on Tuesday but declined to answer whether he would seek to be re-elected leader thereafter.

“Wow, another earthquake in German politics,” said Carsten Brzeski, chief economist at ING Germany, referring to the upheaval within the SPD party.