Warning to Aboriginal and Torres Strait Islander readers: This story contains images and references to a deceased person.

The Victorian government has committed to considering bail law reforms this year, but will not reveal which areas of the laws they plan to amend or the extent to which they will be rolled back.

On Wednesday, Victoria’s Attorney-General Jaclyn Symes said the state’s controversial bail laws would be tweaked following further consultation and proper cabinet processes at some point this year, conceding that some of the most vulnerable people in the community had been unnecessarily caught up in the justice system or placed on remand. 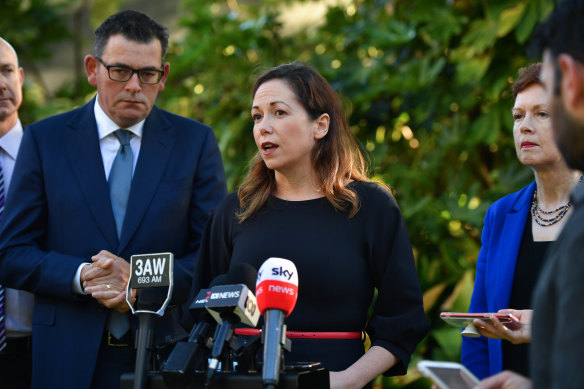 “We have had examples of [remand for] low-level offending, shoplifting for example, where perhaps that person is not a risk to community safety,” Symes said.

“We’re seeing more women incarcerated, more Aboriginal people incarcerated and people that are on the poverty line. What we do know is that once people are in the justice system, it can be very difficult to get out of that spiral. So, are there better ways to respond to those people, divert them away from the justice system?”

The government’s consideration of changes to the state’s bail regime comes ahead of the release of a Victorian coroner’s court call for urgent reform, after it found cruel and inhumane treatment of Indigenous woman Veronica Nelson caused her preventable death in jail.

An inquest into Nelson’s death revealed she was withdrawing from heroin and suffering from an undiagnosed medical condition when she was arrested on suspicion of shoplifting in January 2020. The 37-year-old was found dead in her cell at the Dame Phyllis Frost Centre, despite using the prison intercom system to buzz for help about 40 times.

Symes said the bail regime was toughened after “one of the most tragic incidents that has impacted the state” – the 2017 Bourke Street massacre – to ensure that serious offenders were being put into custody to protect communities, but the tightening of the laws has also at times left those that commit non-violent, low-level crimes no opportunity for bail.

Legal advocates on Tuesday backed calls for critical reform to Victoria’s strict bail laws, arguing the laws are the most discriminatory in Australia and have led to an explosion in the prison population.

Symes said any bail reform would also need to go through Parliament and would aim to find the correct balance between ensuring community safety and offering better outcomes for individuals that commit low-level offences.

“I don’t want to preempt my processes in relation to consultation and Cabinet,” Symes said. “It is not about jeopardising community safety – that will remain a focus of any law reform.”