Australia has suspended its bilateral Defence Cooperation Program with Myanmar’s military in the wake of the country’s violent military coup last month.

Police in Myanmar on Friday opened fire on people protesting against the coup, as the junta faced growing international condemnation.

The United Nations Security Council is set to discuss the crisis, which has left dozens of people dead. 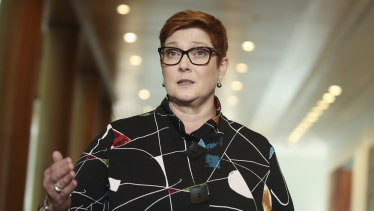 “Australia has raised our grave concerns about the military coup in Myanmar and the escalating violence and rising death toll following the events of 1 February,” Foreign Minister Marise Payne said in a statement released late on Sunday night.

“We condemn the use of lethal force or violence against civilians exercising their universal rights, including the right to freedom of expression and peaceful assembly.

“Australia has had a limited bilateral Defence Cooperation Program with Myanmar’s military, restricted to non-combat areas such as English language training. This program will be suspended.”

Large protests have occurred daily across many cities and towns in Myanmar, and security forces have responded with greater use of lethal force and mass arrests. 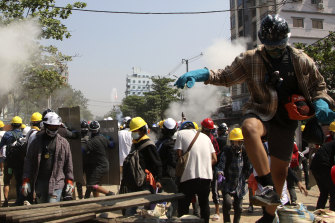 Protesters are dispersed as riot police fired tear gas behind a makeshift barricade in Yangon.Credit:AP

At least 18 protesters were shot and killed on February 28 and other 38 on Wednesday, according to the UN Human Rights Office.

Protests elsewhere on Sunday, including in the two largest cities of Yangon and Mandalay, were also met with the use of force by police firing warning shots and employing tear gas, rubber bullets and stun grenades.

Senator Payne said Australia’s development program would also being re-directed to the immediate humanitarian needs of the most vulnerable and poor, including the Rohingyas and other ethnic minorities.

“We will prioritise the most pressing humanitarian and emerging needs and seek to ensure our humanitarian engagement is with and through non-government organisations, not with government or government-related entities, as is currently the case in some parts of the program,” she said.

Australian economist Sean Turnell, an adviser to Aung San Suu Kyi, has been detained in Myanmar following the military takeover of the country.

“We call for the immediate release of Professor Sean Turnell, State Counsellor Aung San Suu Kyi, President Win Myint and others who have been arbitrarily detained since 1 February,” Senator Payne added.