Glasgow: At least 19 countries plan to commit at the COP26 climate summit on Thursday to stop public financing for fossil fuel projects abroad by the end of next year, according to two people familiar with the talks.

The British government, which is leading the effort, was in last-minute talks on Wednesday to clinch deals with more countries to sign the pledge before it is launched, the sources said. 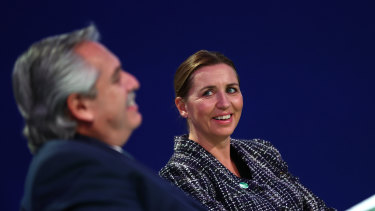 Denmark’s Prime Minister Mette Frederiksen shares a laugh with Argentina’s President Alberto Fernandez. Denmark is one of the countries reportedly making the committment.Credit:Getty

So far, countries signed on to join include Denmark, Finland, Costa Rica, Ethiopia, Gambia, and the Marshall Islands, plus some development institutions including the European Investment Bank and the East African Development Bank, the sources said.

The countries will commit to end public support for foreign fossil fuel energy projects by the end of 2022, though the deal would allow for unspecified exemptions in limited circumstances.

One source familiar with the discussions said the countries so far lined up to sign the deal have collectively invested billions of dollars per year in international fossil fuel projects over the last few years.

The British government did not immediately respond to a request for comment. 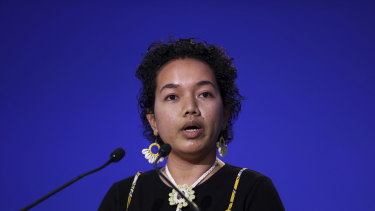 Governments and financial institutions are facing increased pressure to stop funding coal, oil and gas projects responsible for producing the greenhouse gas emissions that are driving climate change, both at home and abroad.

Denmark said on Wednesday that it would halt international financing for investments, projects or activities that promote fossil fuels by the end of this year, with exemptions for some gas projects that meet “strict conditions” until 2025.

The COP26 deal also aligns with policies in countries including Britain, which ended direct government support for new fossil fuel projects overseas this year. The European Investment Bank has also committed to end oil and gas project funding this year.

The agreement, while not binding, would attempt to build consensus between wealthier and poorer nations around overseas financial support to stop backing fossil fuel projects and instead support clean energy both to curb emissions and to avoid building stranded assets.

The International Energy Agency has said ending investments in oil, coal or gas supply projects is necessary for the world to reach net-zero global emissions by 2050 – which scientists say is crucial for keeping the average global temperature from rising more than 1.5 degrees Celsius beyond pre-industrial levels.

Beyond that threshold, global warming could unleash catastrophic and irreversible impacts.

Enormous investment in green technologies is needed for the task. Bernstein analysts estimate the required low-carbon investments at roughly $US2-4 trillion per year until 2050.

Get daily updates on the climate summit that will shape our future. Sign up to our COP26 newsletter here.