Soon after the inquiry into the hotel quarantine system was announced in early July, Premier Daniel Andrews was adamant in his assertion about where the buck stops: "I am the leader of this government and I take responsibility and have accountability for these and all matters." On Friday, Mr Andrews will have his chance before the inquiry to explain his role in the botched operation. He must do a better job than his ministers.

At a time when Victoria is more reliant than ever on government competency, the parade of senior ministers that fronted the inquiry this week showed a glaring lack of mastery over the decision-making in their departments. While Socrates' phrase "I know that I know nothing" may have more scholarly origins, the ministers appear to have taken it on face value with some pride. 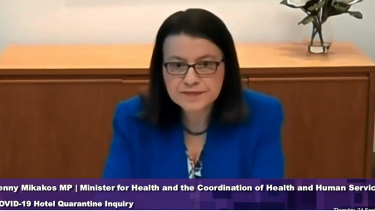 It was Jobs Minister Martin Pakula, whose department contracted private security companies to guard people in hotel quarantine, who appeared before the inquiry first. He drew a blank when asked who made the call on using private security guards, had no insight into why his department was initially put in charge of the operation, was not across any of the contractual details in hiring the guards, and was not consulted when the Department of Health and Human Services took over control of the operation.

Then came Police and Emergency Services Minister Lisa Neville, who also came up blank when asked about the call to hire security guards. She did recall first hearing of the decision from Emergency Management Commissioner Andrew Crisp, but admitted to not questioning its genesis.

On Thursday Health Minister Jenny Mikakos failed to shed any further light on the fateful decision. Despite her department taking the lead in the hotel operation, she confessed to not even being aware that private security was being used to guard people in hotel quarantine, until the infection outbreaks in mid-May.

The Age accepts that the pandemic has put enormous strain on government. Major logistical undertakings to combat the virus, such as hotel quarantine, have been required at speed and scale. Ministers cannot be expected to be across every line of detail. But that is not what is being asked of them.

What has been so shocking is the apparent hands-off role played by the government's most senior ministers when it comes to critical decisions with real consequence. If you take the ministers' responses at face value, major decisions are being left in the hands of departmental heads and senior staff with minimal to no oversight from elected officials. That is not how the system is meant to work.

In representative government, ministers are meant to be selected for their effectiveness in managing a portfolio. That is not what we saw. What revealed itself was a culture within the government of buck-passing, a lack of proper scrutiny and little accountability.

When Mr Andrews fronts the inquiry on Friday, it would be optimistic to think that he will finally solve the mystery of who decided to employ private security guards, or who was supposed to supervise their work. While we hope the inquiry does get to the bottom of that issue, it is clearly not the most troubling concern.

The Premier needs to face the reality that some of his senior ministers have this week revealed themselves to have fallen well short of what Victoria expects of them. As Mr Andrews said, the top job does come with final responsibility. It's time he brought that to bear on his ministers. There must be consequences for those who didn't do enough.

Our weekly newsletter will deliver expert analysis of the race to the White House from our US correspondent Matthew Knott. Sign up for The Sydney Morning Herald‘s newsletter here, The Age‘s here, Brisbane Times‘ here and WAtoday‘s here.

END_OF_DOCUMENT_TOKEN_TO_BE_REPLACED

END_OF_DOCUMENT_TOKEN_TO_BE_REPLACED
Recent Posts
We and our partners use cookies on this site to improve our service, perform analytics, personalize advertising, measure advertising performance, and remember website preferences.Ok