He stood slowly, the old knees creaking a tad, before lugubriously making his way toward the exit, hovering briefly by the Speaker’s chair– no handshakes of course – to give Sir Lindsay a cursory nod before his departure.

As the chamber’s grandiose door swung closed behind him with a quiet thump, this peculiar man’s unlikeliest of reigns as Leader of the Opposition was at an end. Corbynism? C’est fini.

To think it had been nearly five years since he took his place at the dispatch box. What a different political scene it was back then. Different country. 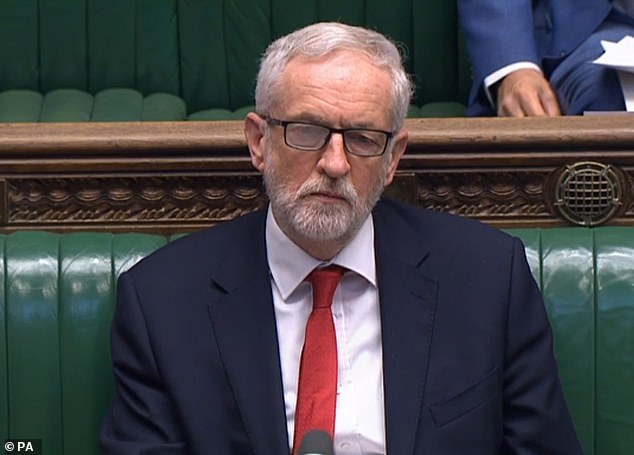 Labour leader Jeremy Corbyn during Prime Minister’s Questions in the House of Commons, London on Wednesday

David Cameron, fresh from an unexpected electoral triumph was still in No 10, Theresa May was home secretary and Boris Johnson a mere backbench squit as the newly elected member for Uxbridge and South Ruislip.

Had you mentioned the word Brexit, people would probably have assumed you were referring to an obscure Eastern European tennis player.

The House that day was rammed, the space behind the Speaker’s chair three men deep as the entire chamber craned like ostriches to catch a glimpse of Labour’s new leader, who despite his 30-odd years in the Commons was largely unknown beyond the angry, Marxist north London circles he inhabited.

He certainly didn’t look the part. For his first outing in the chamber he wore a sports jacket and slacks, a look reminiscent of Rowan Atkinson’s hapless twit, Mr Bean.

Rather than challenge the PM in debate, he chose to read out emails purportedly from members of the public. 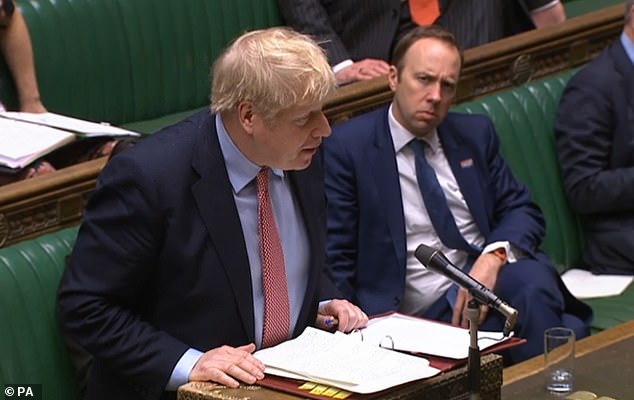 The first, I recall, was from ‘Marie’ who was complaining about housing. Cameron and his oafish front bench colleagues vainly tried stifled their giggles. So too did members of the gallery. No one that day one gave him much hope.

Yet fast forward five years and yet here he still was, albeit bowing out for the last time. As he heaved himself to the dispatch box, there were none of the usual huzzahs to greet his arrival as is customary when a leader faces his final PMQs.

A few murmurs of approval spewed forth, but otherwise the sparsely attended chamber sat in stony silence, a spooky stillness reflecting these extraordinary times.

With the House due to rise last night, Speaker Sir Lindsay decided to hold an extended session.

Without wishing to cause alarm, Mr Corbyn did not appear altogether perky. His voice sounded as though he’d been gargling shingle. This might have explained the vinegary tone he chose to adopt, tutting and shaking his head at the PM like an irritable Latin beak. Perhaps he was just tired. Tired of the game, tired of the battle.

Boris tried to toss his opponent an olive branch, paying tribute to his ‘sincerity and his determination to build a better society’ but Jezza was having none of it. He was in no mood for the PM’s charity.

His face remained as expressionless as a terracotta figurine. No smile nor barely so much as a nod of acknowledgement. 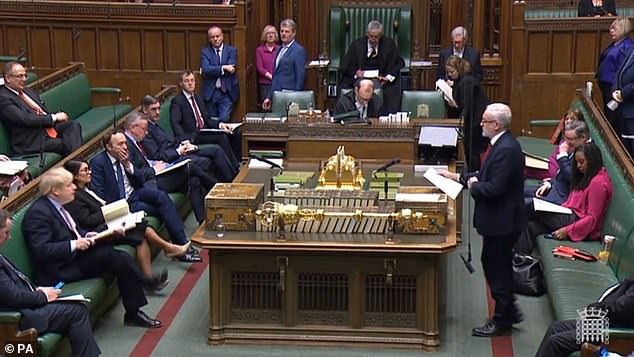 Corbyn was concerned that the PM was under the impression he was retiring.

‘Oh I’ll be around,’ he chirped. (Was that a groan from the Opposition benches?) ‘I’ll be campaigning, I’ll be arguing, and I’ll be demanding justice for the people of this country.’

Boris flashed a Muttley grin. ‘I’m sure this will be greeted warmly by his successor,’ he beamed.

The mood was all wrong. He could have done with some tips from his health spokesman Jon Ashworth, who’s done a decent job shadowing Matthew Hancock in recent weeks, striking that right balance between criticism and support. When Corbyn finished with a little speech about equality – ‘No one is an island, no one is self-made’ – he was clearly hoping to go out on a crescendo, but his delivery lacked the requisite fizzle.

He does those sorts of speeches quite well out on the campaign stump but, the truth is, he’s a poor Parliamentarian.

For the rest of the session, Boris continued to answer queries about the emergency measures he has been forced to bring in to fight the coronavirus.

As Mr Corbyn prepared to leave the chamber for the last time as leader, the irony will surely not have been lost on him that many of the most extreme interventions the PM has been forced to make, or at least consider – renationalisation, vast government handouts, huge benefits increases – are things Jezza and his Left-wing tribe a have been espousing for years.

In just over a week, his period as leader of the Opposition will be at an end, leaving him more time with his wife, with their cat El Gato, with his allotment and his marrows.

No doubt that rusty old megaphone of his will make a reappearance. The one he used to bark orders at Western governments at all those rallies and those protest marches where he always felt the most comfortable.

And where many, not least some of those within his own party, feel he really should have remained.

END_OF_DOCUMENT_TOKEN_TO_BE_REPLACED

END_OF_DOCUMENT_TOKEN_TO_BE_REPLACED
Recent Posts
We and our partners use cookies on this site to improve our service, perform analytics, personalize advertising, measure advertising performance, and remember website preferences.Ok