A hot air balloon company is poised to take legal action against the Bureau of Meteorology over an incorrect weather forecast that led to a crash landing in the Yarra Valley.

Eleven passengers were injured in 2018 when a hot air balloon, operated by Go Wild Ballooning, was forced to make a hard landing near Yarra Glen. 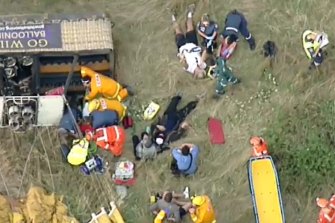 Seven people were hospitalised after the hot air balloon was forced to make an emergency landing north of Melbourne in February, 2018. Credit:Nine News

The pilot made the emergency landing to avoid power lines after a sudden wind change 45 minutes into the flight caused the balloon to suddenly shift course by 90 degrees.

The balloon took off at 6.17am on February 8 in clear conditions after the pilot consulted the weather bureau’s automated phone weather service, which should have warned him about the coming wind change.

However, an Australian Transport Safety Bureau (ATSB) investigation later found that a procedural error by a meteorologist meant that the pilot had listened to an earlier briefing that had been uploaded a second time.

The report also found that the passengers did not receive an effective safety briefing before the flight. 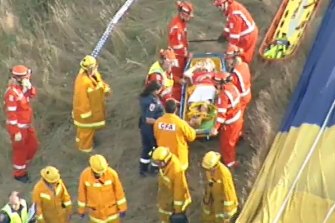 A person is put on a stretcher after the hot air balloon crash in the Yarra Valley on February 8, 2018.Credit:Nine News

Earlier this month, Go Wild filed its own claim in the Supreme Court against the Commonwealth of Australia in a bid to make the federal government liable for any potential damages.

Go Wild is also seeking indemnity from costs it may have to pay in defending the action in court.

“The BOM breached its duty of care to hot air balloon operators and the plaintiff, Go Wild, by
uploading the incorrect recording instead of the correct recording to its automated phone
briefing service for the morning of February 8, 2018,” the writ states.

“Had the correct recording been uploaded by the BOM on the morning of February 8, 2018 (which indicated that a significant wind change could be expected), the flight carrying the passengers would not have launched and any injuries or damage sustained by the passengers arising from the incident would not have occurred.

“In the circumstances the BOM acted negligently.”

A lawyer for Go Wild declined to comment, but it is understood that the writ has not yet been served and is dependent on the passengers’ claims.

The weather bureau has updated its procedures following the accident to ensure pilots have access to the latest weather information.

A new recording system will automatically upload the briefings made by forecasters to the telephone weather service.

Go Wild has introduced new safety processes, including having passengers demonstrate the emergency landing position after they board the aircraft.