​After years of running high-class escort services, a secretive Sydney businesswoman is ruffling the feathers of her country neighbours over plans for a helipad at her “ultra-luxurious” and “very private” retreat which attracts an eye-watering nightly rate of $11,000.

Eyebrows were raised when high walls, security cameras and a stern warning not to trespass were erected at the entrance to a five-acre farm on Promised Land Road, about 15 minutes drive from Bellingen, a small town on the Mid North Coast. 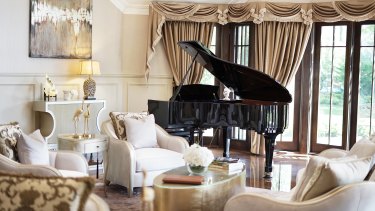 Inside the $11,000 per night “paparazzi-free” luxury retreat near Bellingen.

Over the past three years, the new owner spent $6 million to create Hermes Estate, a five-star “paparazzi-free zone” in the “most opulent” two-bedroom villa in the country.

As well as a French chef, private butler and Dom Perignon on ice, the website for Hermes Estate claims: “It’s a couple’s wonderland, a VIP’s utopia, an artisan’s paradise. The property offers bespoke experiences to cater to the most discerning tastes.”

Its opening in the middle of last year has been greeted with an effusive array of endorsements in magazines and newspapers. CEO Magazine gushed, “Hermes Estate isn’t just luxury personified: its magic-wand level of pampering is testament to the idea that dreams can come true.”

The Australian newspaper reported: “The ceilings sparkle with Swarovski crystal chandeliers and the floors glimmer with gold dust encased beneath a burnished epoxy finish.”

But it was the helipad that was the last straw for locals.

“We’re just happy the way things are in our quiet peaceful stretch of country, it’s absolutely beautiful,” said one neighbour who is among more than 30 people who have lodged objections with Bellingen Shire Council.

Another neighbour expressed concern that the noise from helicopters would disturb their “very quiet, lovely valley”.

According to the website​,​ the owner is a “very private person” who is a “successful businesswoman, writer, artist and PhD”. One travel writer told the Herald the owners refused to allow any photos of themselves and insisted there be no reference to their identities.

However, the application to the Bellingen Shire Council to construct a helipad on the property has revealed that the owner of the five-star retreat is Lissa Montana and her partner Toufik, who has changed his surname from Allaoui to Montana. 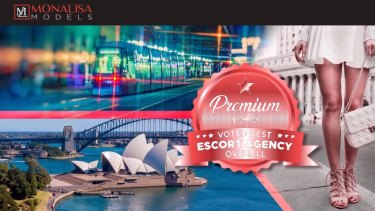 Ms Montana, 53, has no presence on social media. However, company searches show that for years she ran high-class escort agencies Mona Lisa Models and Crown Escorts from her Sydney apartment in Milsons Point.

In 2017 Ms Montana embarked on a new project when she abandoned Sydney for a locale known as Promised Land, spending $1.8 million on “Seventh Heaven,” a farm previously owned by a spiritual healer.

Not only are the neighbours upset with the application to land helicopters in the valley, Ms Montana has allegedly broken the cardinal rule of the rural paradise which is “to respect the private world” of the locals. She told The Australian her guests “can tinkle at the same grand piano that neighbour David Helfgott regularly comes by to play”.

A spokesman for the Helfgott family said they were annoyed that the owners of Hermes Estate had traded on his name, adding that Helfgott was “a friendly person who knows all the neighbours” and had played the piano a couple of times but hadn’t played there since the COVID outbreak and certainly hadn’t expected his private playing to be referred to in an article.

Helfgott’s traumatic upbringing was depicted in the film Shine, which won an Oscar for actor Geoffrey Rush who played the pianist.

In her application to council, Ms Montana said she was seeking development approval from Bellingen Shire Council for a helipad “which can be offered to clients for direct travel to the premises. The helipad will also be offered to clients visiting the retreat who require a private arrival.”

Ms Montana submitted that the helicopter landings would be “infrequent” and would be between 10am and 5pm.

She also suggested the helipad would be made available for emergency services “which may benefit the community in the event of medical emergencies, fires, or floods which may impact the area”. 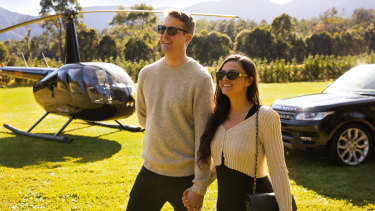 Marketing material from Hermes Estate, which has applied to install a helipad on the Bellingen property.

Since more than 30 objections have been received, the application will be determined by elected councillors, rather than council staff.

When asked to comment, Ms Montana sent a text message expressing surprise that her number had been obtained by the Herald. “However, we have no further information or comment to share publicly, this is actually a private venture,” she added.