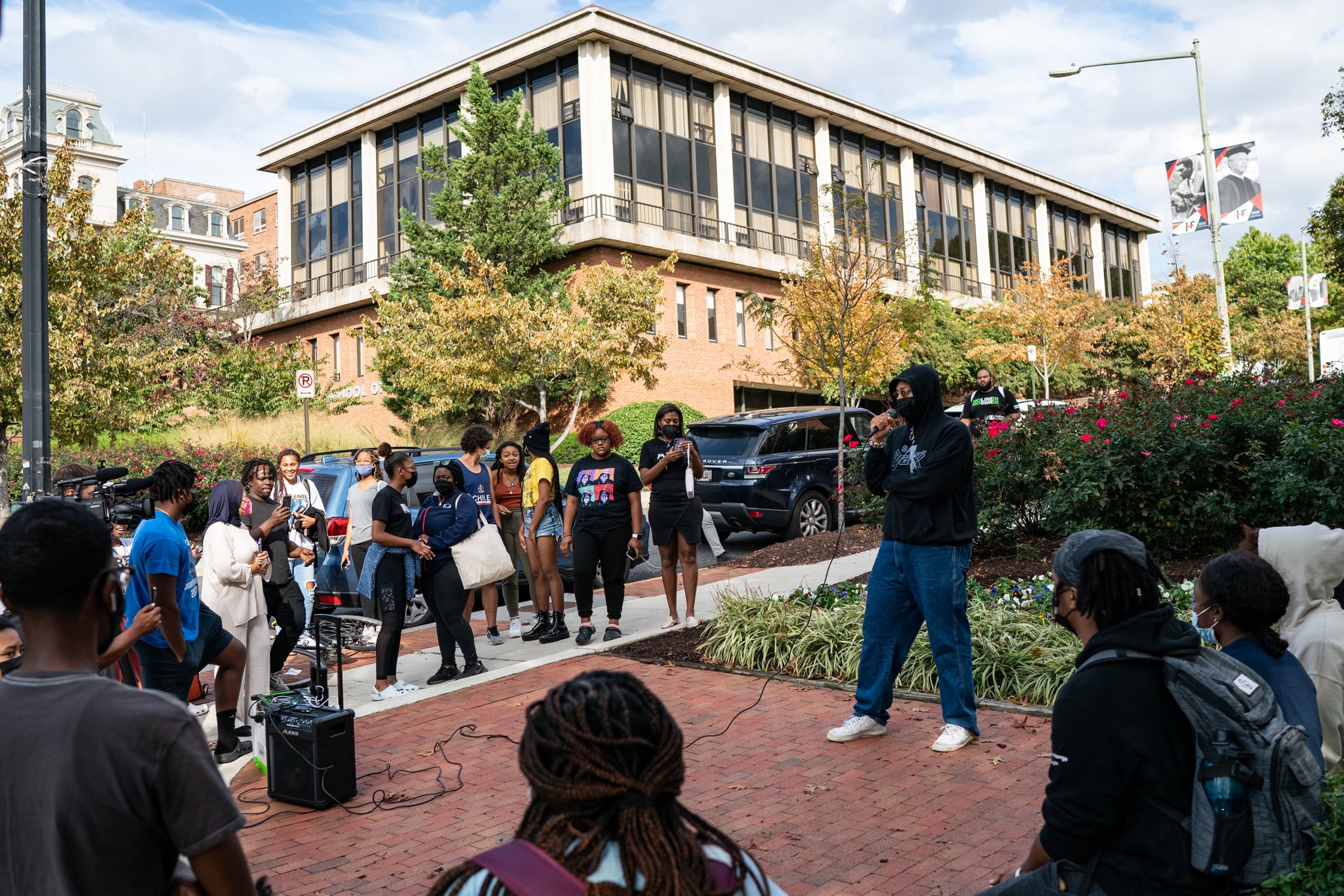 For much of Gen Z, the Black Lives Matter movement was a personal introduction to the power of protest. As the murder of George Floyd sparked marches all over the world, many young people were feasting their eyes on a collective fight against injustice for the first time IRL. Though 2020’s uprising was one of the largest and most far-reaching protests for the sanctity of Black life, the spirit of that uprising was sown for generations. Evidence that this spirit has been alive and well for decades can be found at Washington DC’s famed historically Black college, Howard University.

On Oct. 12, students of the prestigious school began their occupation of the campus’ Armour J. Blackburn University Center in response to the administration’s failure to show up to a town hall meeting. Students—led by national HBCU coalition The Live Movement and Howard’s Young Democratic Socialists of America (YDSA) chapter—banded together to do what many of their predecessors did in the face of feeling unseen and unheard: resist. And on Nov. 15, they claimed victory after the longest student protest in Howard University’s history.

“After 33 days of protesting and 20 days of negotiation, we are pleased to announce that we have reached an agreement with Howard’s administration,” Erica England, a student activist, said during a live press announcement. “Howard concedes nothing without a demand, and we have shown that the power of students is paramount.”

The month-long road to a deal with Howard’s administration began on a strained note. “We came together as one and we went to the town hall, probably about 30 or 40 of us. We made up the vast majority of the audience, unfortunately, but after we saw the administration did not show up, we decided that we were going to occupy the Blackburn Center,” Logan Miller, vice president of Howard’s YDSA chapter, recalled to POPSUGAR outside of his tent at Blackburn.

After a month of planning to take action and rallying via group chat, the town hall had become the breaking point for students who were enduring dangerous campus living conditions like mold, mushrooms, mice, brown water, and crumbling ceilings. “There basically wasn’t air conditioning for about a month,” Howard sophomore Jenesis Finks said. “And during that time was when we got a lot of the heat alerts, a lot of those really dangerous emails talking about how we need to stay inside and don’t be outside too much, or else you could get affected by the heat. But inside was just as hot as outside.”

Student grievances with the Howard University administration have led to several campus uprisings over the past 50 years. “This problem has just spanned over decades, since the sixties protests. And so now what we’re doing is the same stuff that they’ve dealt with all those years back then,” Miller said. In 1968, Howard students protested for African-American history courses. In 1989, students protested against Republican strategist Lee Atwater sitting on the university’s board of trustees. In 1997, students (led in part by Chadwick Boseman) protested against the collapse of the College of Fine Arts program. In 2018, students protested against tuition hikes, inadequate housing, and rape culture on campus.

Like many of the students who rose up before them, Howard’s most recent student rebellion was met with the kind of brute disciplinary force many Black students seek to escape by attending an HBCU. “That night, the cops really tried to get people out by any means. We had a banner that said ‘Blackburn takeover.’ They ripped it and poured paint on it,” Finks remembered. “They also, in an attempt to get the students out of the building, pulled the fire alarm when there was no fire. Yeah, which is illegal, but it didn’t work.” Campus police were recorded having physical interactions with students, who were also threatened with expulsion by vice president of student affairs, Cynthia Evers.

Making sense of the present-day tensions between Howard University’s administration and its students requires looking at two major events. The first is a 2016 agreement made between Howard and Corvias, a self-described “privately-held company that partners with public sector institutions to solve their toughest environmental, energy and infrastructure challenges.” In the 40-year deal, Corvias claimed responsibility for financing, renovating, and maintaining four residential facilities on Howard’s central campus. In an article by Howard grad student Kymberli Corprue however, Corvias’ history is laid out as a harrowing one, which includes legislative disputes with the University System of Georgia, the U.S. Congress and the U.S. military.

The second event occurred more recently on June 12, when Howard’s board of trustees voted to eliminate student and alumni trustee roles, leaving many students with the sense that their voices didn’t matter. At the time of the #BlackburnTakeover, the students demanded an in-person town hall with Howard president Wayne A. I. Frederick, the reinstatement of affiliate board of trustees positions, the creation of a proposed housing plan, and amnesty from expulsion for protesters.

Within days of the sit-in, Live Movement founder Aniyah Vines and Howard University Student Association (HUSA) president Kylie Burke were invited to meet with President Frederick, but resolution took weeks. In the dozens of tents outside of Blackburn, the students and faculty spent 20 more nights braving 30-degree temperatures for their cause. Many students attest to the protest being a challenge to their mental health. “I personally struggle from anxiety,” Finks shared. “And there’s been moments where I’m like, ‘I don’t even know if I can do this.’ It’s really a lot of weight to bear, but it really helps having others in the same predicament, having made friends in this area, having friends that came with me to do this.”

Howard grad student Alexis Harper led the Writing, Literacy and Discourse class she teaches in a writing exercise while on-ground at the Blackburn building. While she recognizes the moment’s importance, she has real concerns for the students in its aftermath. “How do you go back from this? After this is over, after the dust is settled. People have all these crazy social experiences they’ve had with each other. They’ve been put into this wild situation where they’re sleeping tent-to-tent next to each other […] When the dust settles, how do you even trust anybody after that?” One saving grace continues to withstand decades of strife at Howard University, however: community. “People come to Howard for the people. You don’t come for no reason. I mean, it’s thee Howard University. The Hilltop, The Mecca, Chocolate City. And people come here to be amazed, to have a community that supports them, to have [an] administration that supports them.”

The latter is still an uphill battle, but students are prepared to continue their fight. Vines, England and Howard NAACP chapter president Channing Hill led a united front in marking the #BlackburnTakeover as the first of many steps forward for Howard and its students.

“We spent 33 days challenging the Howard University administration,” Channing said during the announcement of their victory. “We spent 33 days saying that not only did our lives matter, that our voices mattered, and our concerns mattered. We spent 33 days affirming and fighting for the first-class housing that Reverend Jesse Jackson said we were entitled to. We came, we saw, we declared, and we won.”