Blight of the Christmas flytippers: Huge mounds of illegally dumped waste continue to pile up across UK – including a BOAT dumped in country lane with mattress, wood and bags of rubbish

Huge mountains of illegally dumped waste, including bottles, cardboard and even a BOAT, continue to blight the country’s streets as people rush to get rid of their Christmas rubbish.

Despite councils across the UK warning residents not to leave their waste on the ground near overflowing refuse points after Christmas, the rubbish has been piling up.

The boat which was dumped in Thatcham, Berks, and is named Little Gem, was left alongside a discarded mattress, piles of wood and bags of rubbish. 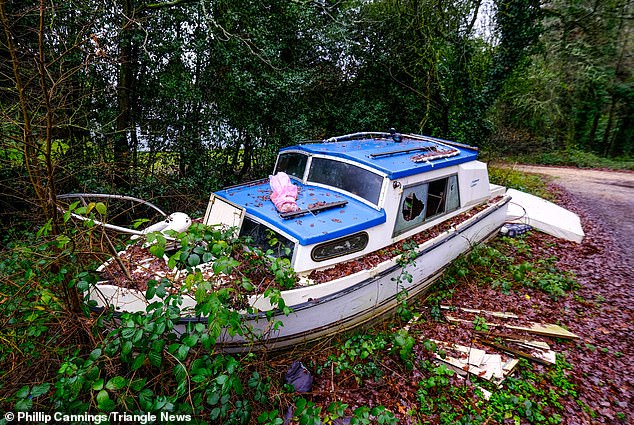 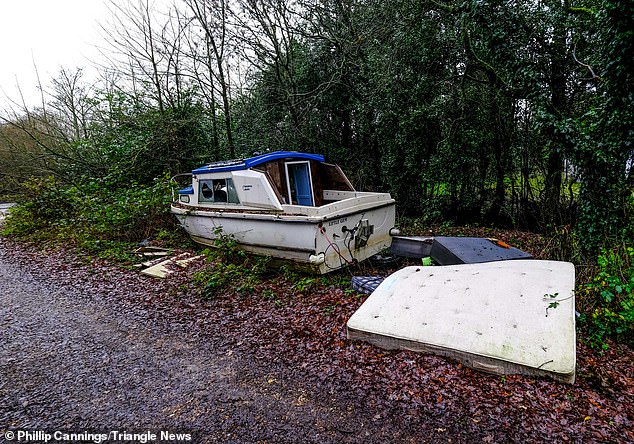 The boat – named Little Gem – was among bags of rubbish, piles of wood as well as the mattress

The local council is now hunting the fly-tippers who face up to five years in prison or a £50,000 fine.

A West Berkshire Council spokesman said: ‘We are aware of the fly tip and are investigating the matter.

‘If anybody has any further information regarding this incident or any other fly tips within the district please contact us.’

In Portsmouth, bottles were overflowing onto the ground at one glass recycling point in the North End area of the city.

Meanwhile, at Tesco in Fratton, the recycling point had become a huge mountain of cardboard as residents had rushed to dispose of their Christmas packaging. 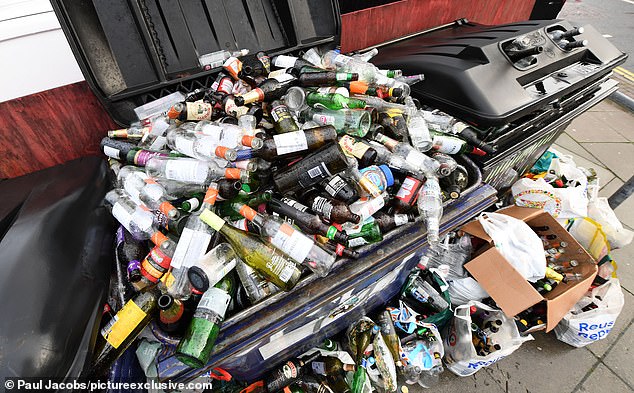 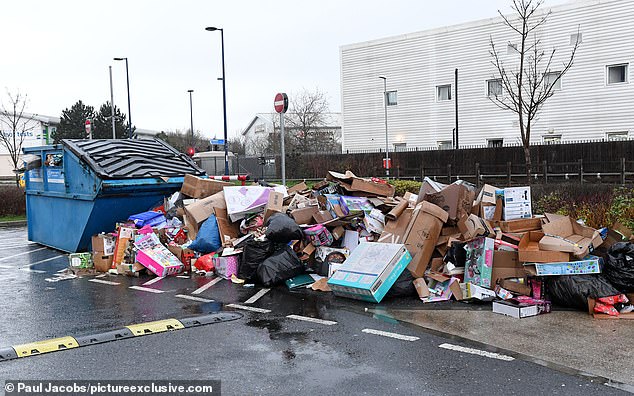 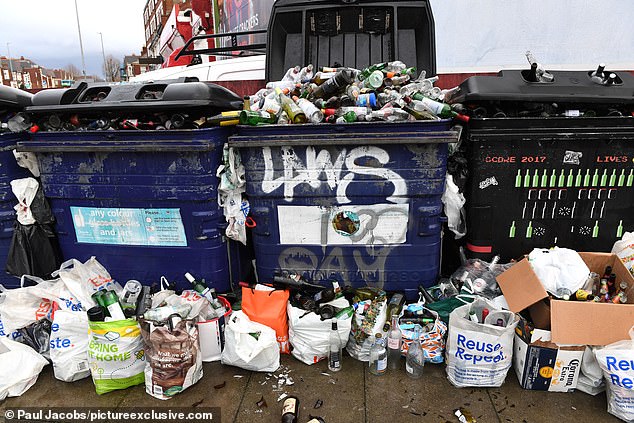 A very merry Christmas: bags and bags of booze bottles piled up at a glass bin in Portsmouth 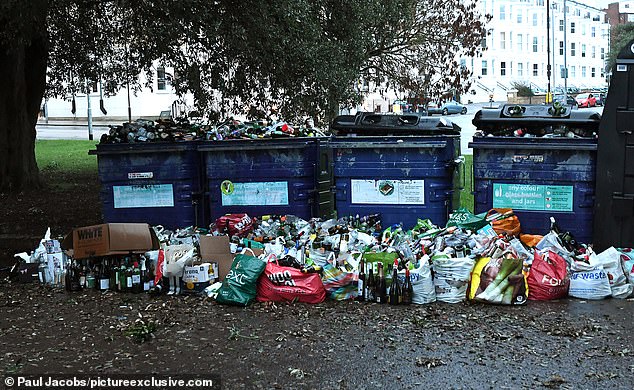 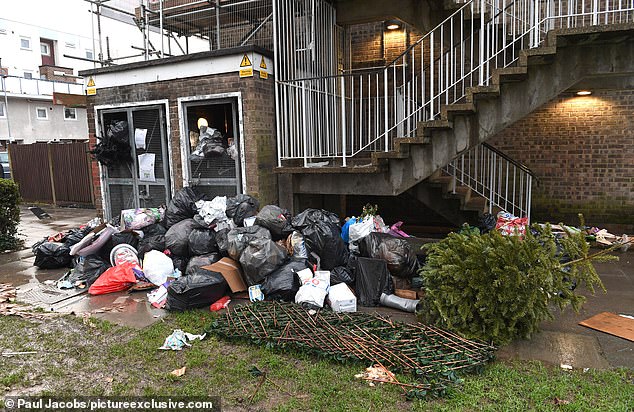 In the north of the country, a councillor shared his outrage after a disgusted resident sent him pictures of a recycling point in Penrith.

The pictures show a huge pile of rubbish which includes a dumped Christmas tree and some unwanted electrical items.

He added: ‘No one can think it’s correct to just dump items like this and leave them at any time.

‘Remember if it’s not in the bin then it’s fly tipping and a fine could be given to those who haven’t given a thought to the mess they are making.’ 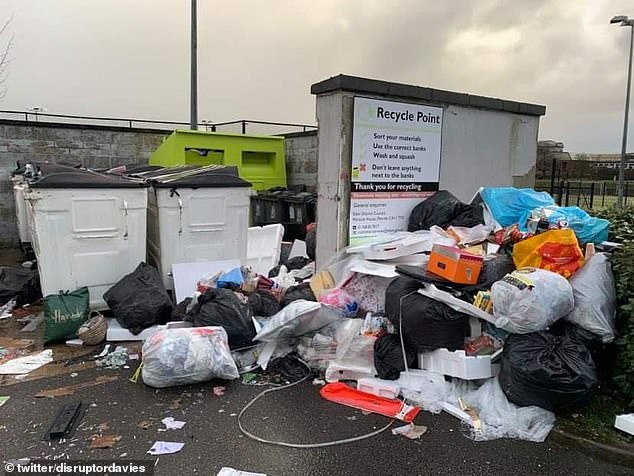 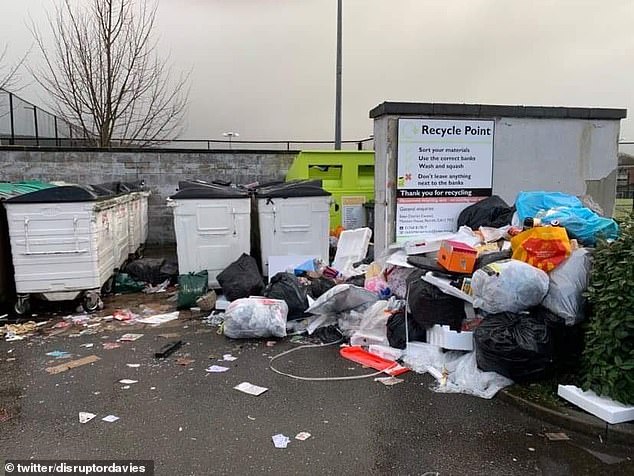 In Bristol, similar scenes were spotted at the Tesco recycling centre where mountains of cardboard and glass bottles have piled up despite signs warning people not to do so.

In Scotland, Methil SNP councillor John O’Brien told the Courier there was ‘no excuse’ for the level of fly-tipping going on after huge amounts of rubbish were dumped in Dumferline and Methil this weekend.

Sharing pictures of overflowing waste at Methil recycling centre, he added: ‘People haven’t been going to the shops for their Christmas shopping because of the pandemic,’ he said

‘They’ve ordered online instead and they’re left with all this cardboard as a result.

‘A lot of people just don’t know how to recycle properly.’ 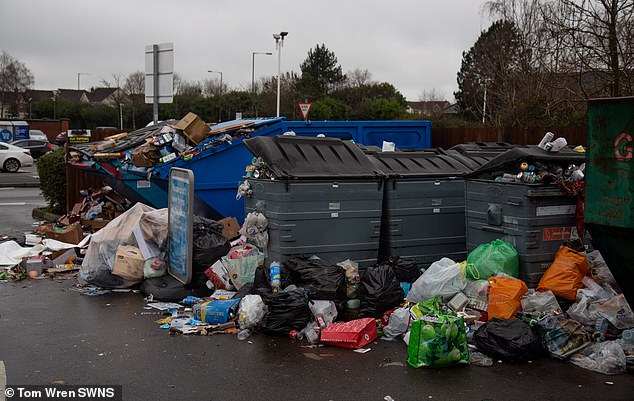 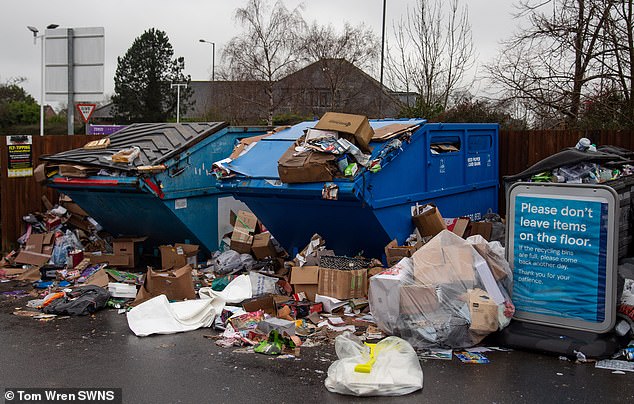 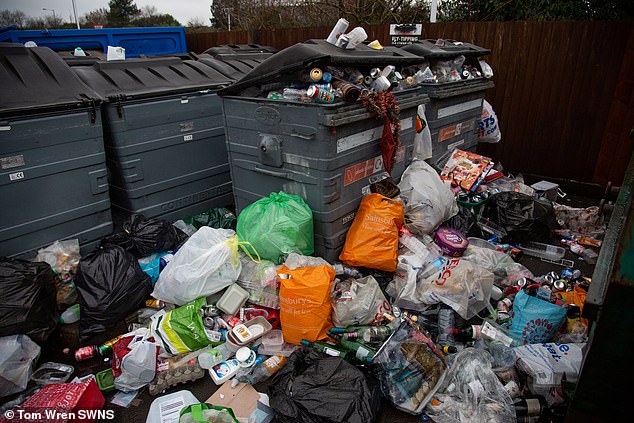 Meanwhile, pictures were shared on Twitter of a large amount of cardboard dumped at Dumferline retail park.

It comes after a community in Sheffield was left outrages as rubbish mounted up at waste centres across the city yesterday.

The recycling points at the supermarkets were pictured with piles of cardboard, empty beer boxes and other bags of rubbish accumulating around them.

The dumped rubbish piles were pictured by those living near them at Asda stores in Chapeltown, Handsworth and Parsons Cross.

Morrisons in Ecclesfield had a huge pile too which has angered many in the community. 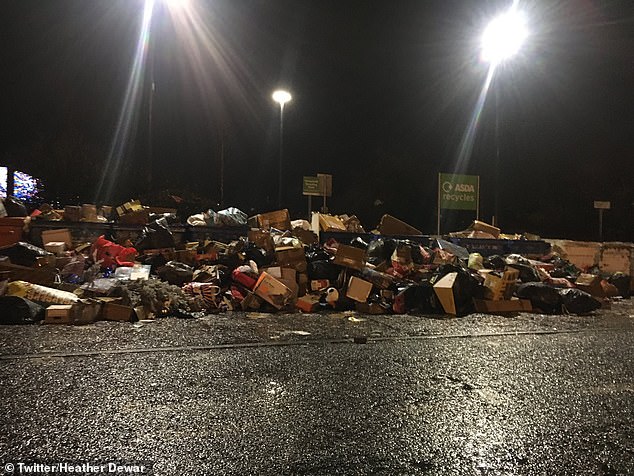 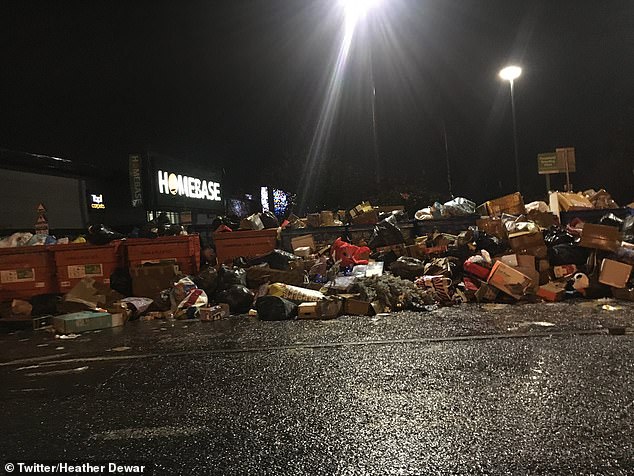 After finding bins full, people have just dumped their rubbish in front at Dumferline retail park 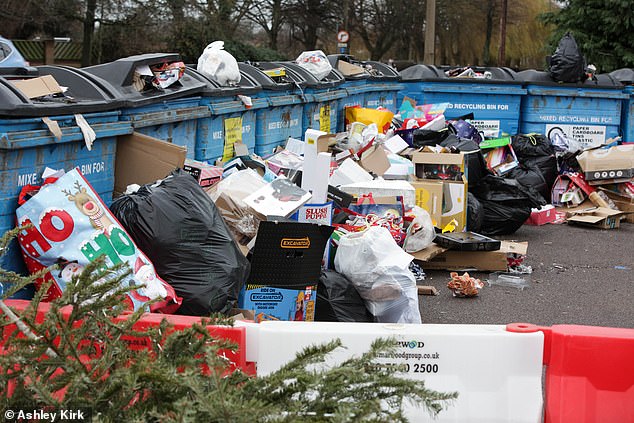 Mountains of Christmas rubbish dumped by fly tippers have been pictured overflowing at recycling areas outside UK supermarkets. Pictured is rubbish in Long Eaton, Derbyshire

The recycling centre at West park in Long Eaton was coated with Christmas rubbish after people flocked to clear their houses of toy boxes, bags, trees and bin bags.

Despite signs saying warning rubbish left on the floor was fly-tipping people were seen adding to the piles of rubbish.

Erewash borough council who manage the site were later forced to close the gates to the site and took to Twitter to tell people to stop fly-tipping.

Martin Montague, creator of the free national fly-tipping reporting app ClearWaste.com, said: ‘It is truly shocking that people can’t hold on to their rubbish for a few extra days over the Christmas period until the binmen come round and instead choose to dump it in streets and the countryside.

‘It is a disgusting thing to do. Fly-tipping harms the environment and costs taxpayers millions of pounds each year to deal with – money which could otherwise be spent on things like schools and hospitals.

‘We’ve seen a huge increase in fly-tipping in the past 12 months as council tips have had to bring in extra restrictions to keep staff and users safe from Coronavirus, but there are clearly a lot of people who think dumping their rubbish anywhere they like is acceptable.

‘A large part of the problem is people using unlicensed rogue traders to take extra waste away and these people often fly-tip it, leaving the countryside and towns littered with piles of rubbish and householders at risk of a fine.’

ClearWaste.com helps to combat fly-tipping by allowing people to search for licensed waste carriers in their area to get rid of unwanted rubbish.

END_OF_DOCUMENT_TOKEN_TO_BE_REPLACED

END_OF_DOCUMENT_TOKEN_TO_BE_REPLACED
Recent Posts
We and our partners use cookies on this site to improve our service, perform analytics, personalize advertising, measure advertising performance, and remember website preferences.Ok