Home » World News » Hundreds line the streets for boy, 14, knifed outside McDonald's as mum says she's 'still waiting for him to come home'

Hundreds line the streets for boy, 14, knifed outside McDonald's as mum says she's 'still waiting for him to come home'

HUNDREDS of mourners today lined the streets to farewell a boy, 14, who was knifed to death outside a McDonald's in Birmingham.

Dea-John Reid's devastated mum, Joan Morris – who wore purple as a symbol of peace – said she was "still waiting for him to come home". 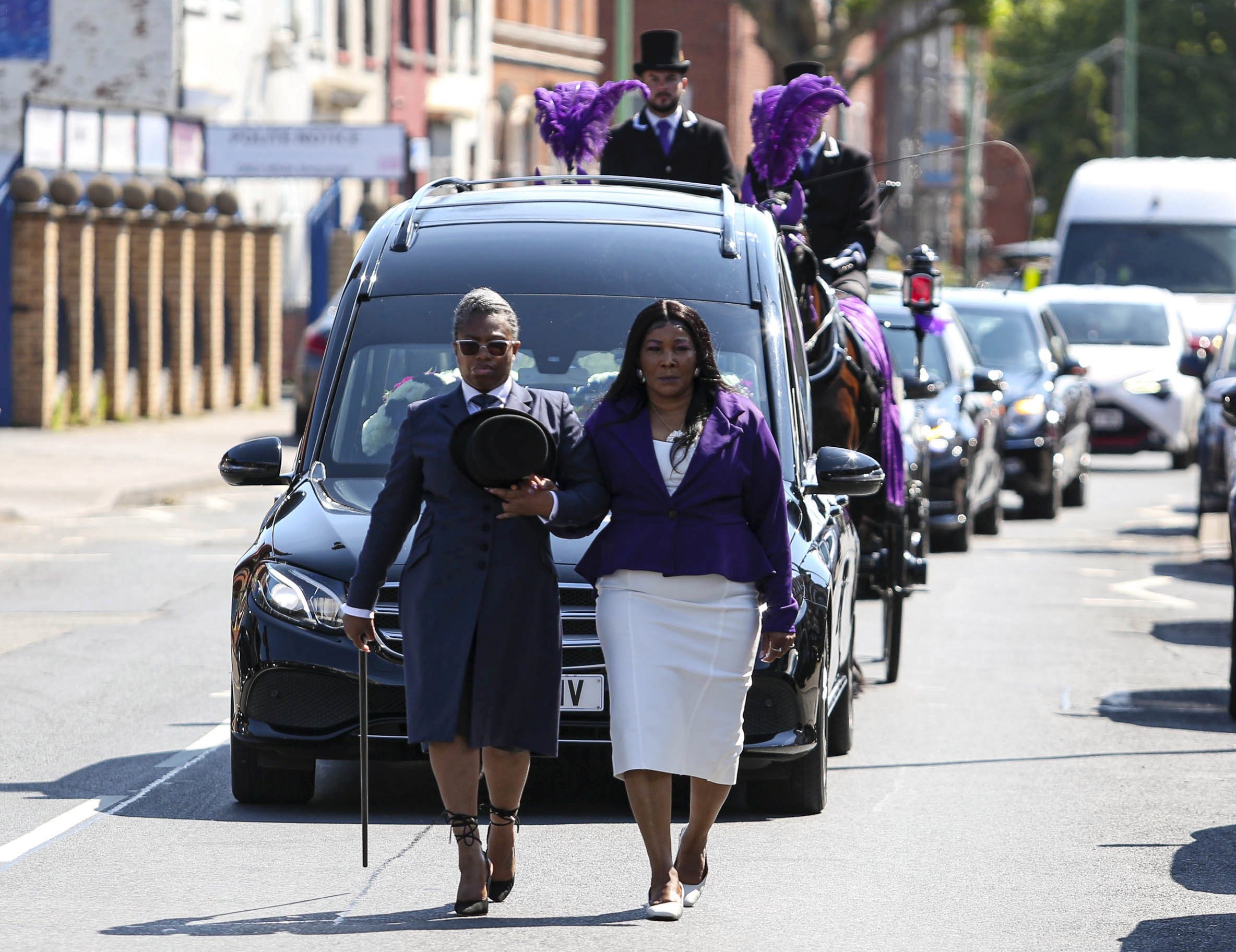 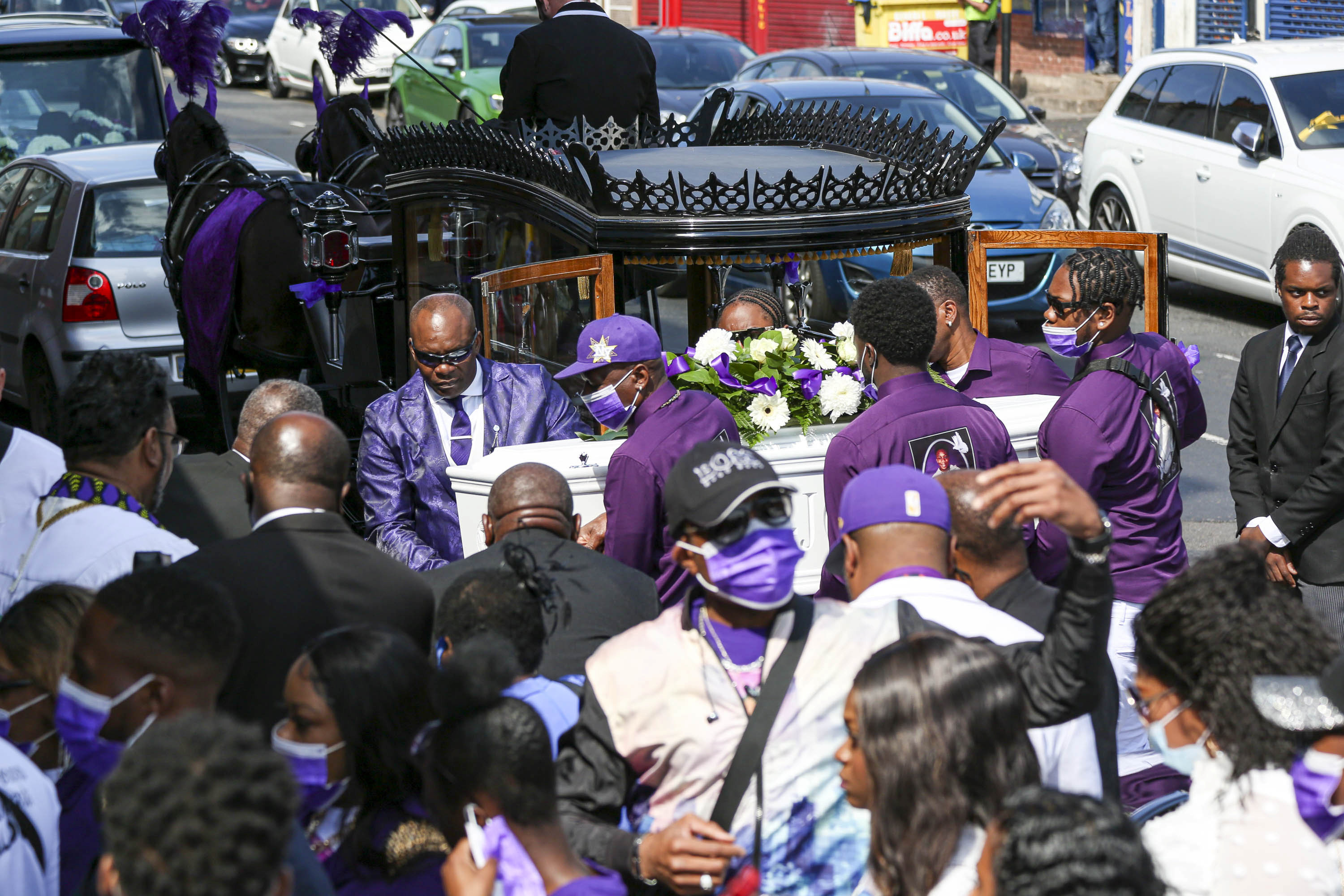 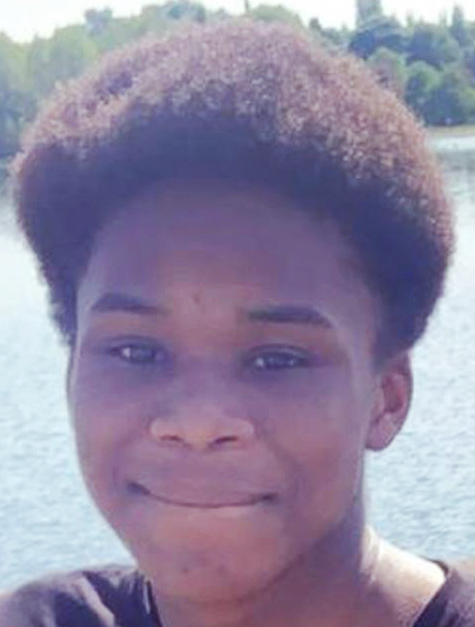 The teen had gone out to play football on Bank Holiday Monday – but never returned home.

He was chased before being knifed in the chest outside a McDonald’s in King­standing.

Today about 300 people lined the streets near where he was fatally stabbed, with hundreds more watching his funeral as it was live-streamed online.

His mum walked ahead of her son's white coffin as it was brought to the church by horse-drawn carriage.

Six pallbearers wore purple tunics with photos of Dea-John on them.

They placed the casket bearing his name at the front of the New Testament Church of God in Handsworth.

I never knew it would be last time I saw your face.

Joan's heartbreaking tribute, read out by a family friend, said: "I can't believe it has been six tragic weeks since the death of my baby son Dea-John.

"I will remember the day May 31 as the day my world turned upside down, you have left us too soon.

"Every morning I wake up and I still look forward to coming into my bedroom and asking how I was.

"Every time my phone rings I hope it is you.

"When the front door knocks I hope it is you asking 'what's up mum, what's for dinner?'

"On May 31 you were waiting out to go for football and asked me to comb your hair, and I said I would do it when you were back.

"When time was getting on I rang and asked if you still wanted me to comb your hair and you said 'I will be home in 40 minutes'.

"I'm still waiting for that 40 minutes because you never returned."

Joan added: "I never knew it would be last time I saw your face.

"Dea-John, I miss asking you to make a cup of tea for me, giving me my medication, checking on me, adding photos to my Facebook page and I miss hearing your voice saying 'get with the flow'.

"So many people came to your vigil – it was like you were a celebrity which I know you would [have] loved."

Bishop Desmond Jaddoo, who led the funeral service, also paid tribute to the youngster, and described his final moments running away from his killers.

He said: "Thank you Lord, he doesn't have to run anymore, look over his shoulder anymore because he is sheltered by Jesus.

"We pray for those who are chained by violence, and we pray that you Lord set them free from those chains."

His brother Kirk, who gave Dea-John the nickname 'Robinho' because of his incredible footballing skills, said: "Brothers can never be apart and love you forever and miss you more than words can express."

The 90-minute service ended with a video montage played on a big screen showing Dea-John performing dozens of football kick-ups.

A pathologist has confirmed that the boy had died from a stab wound in the chest. 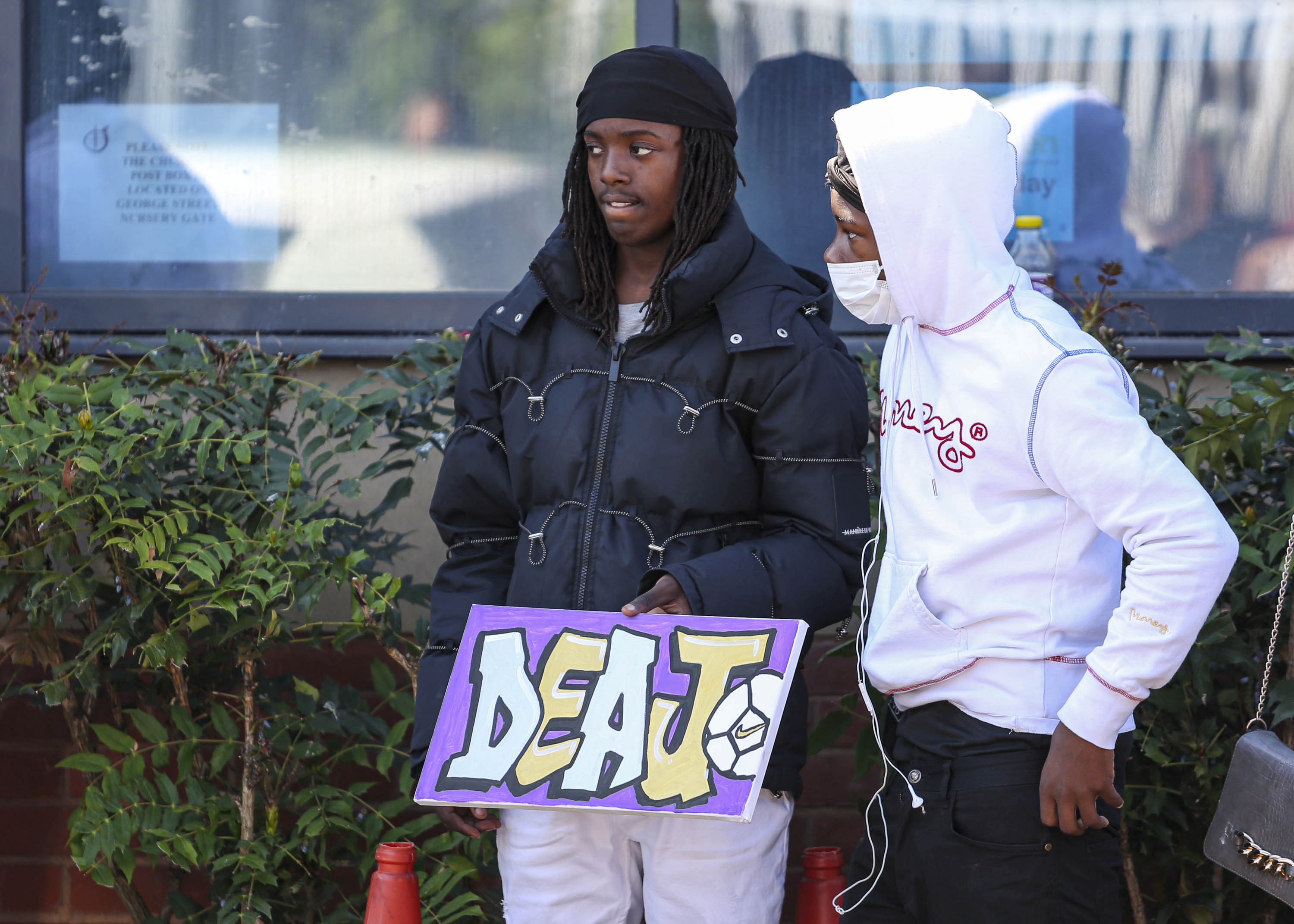 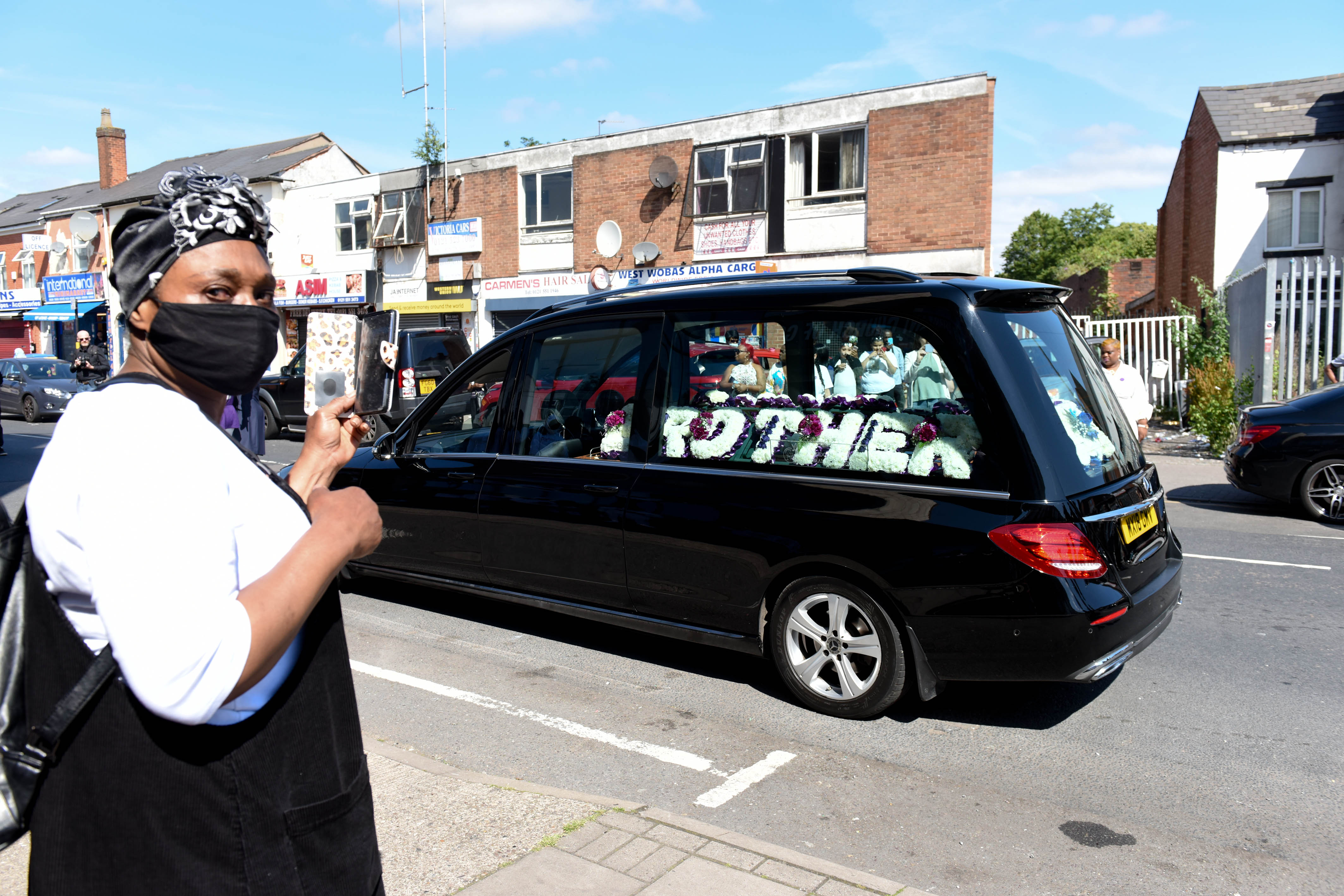 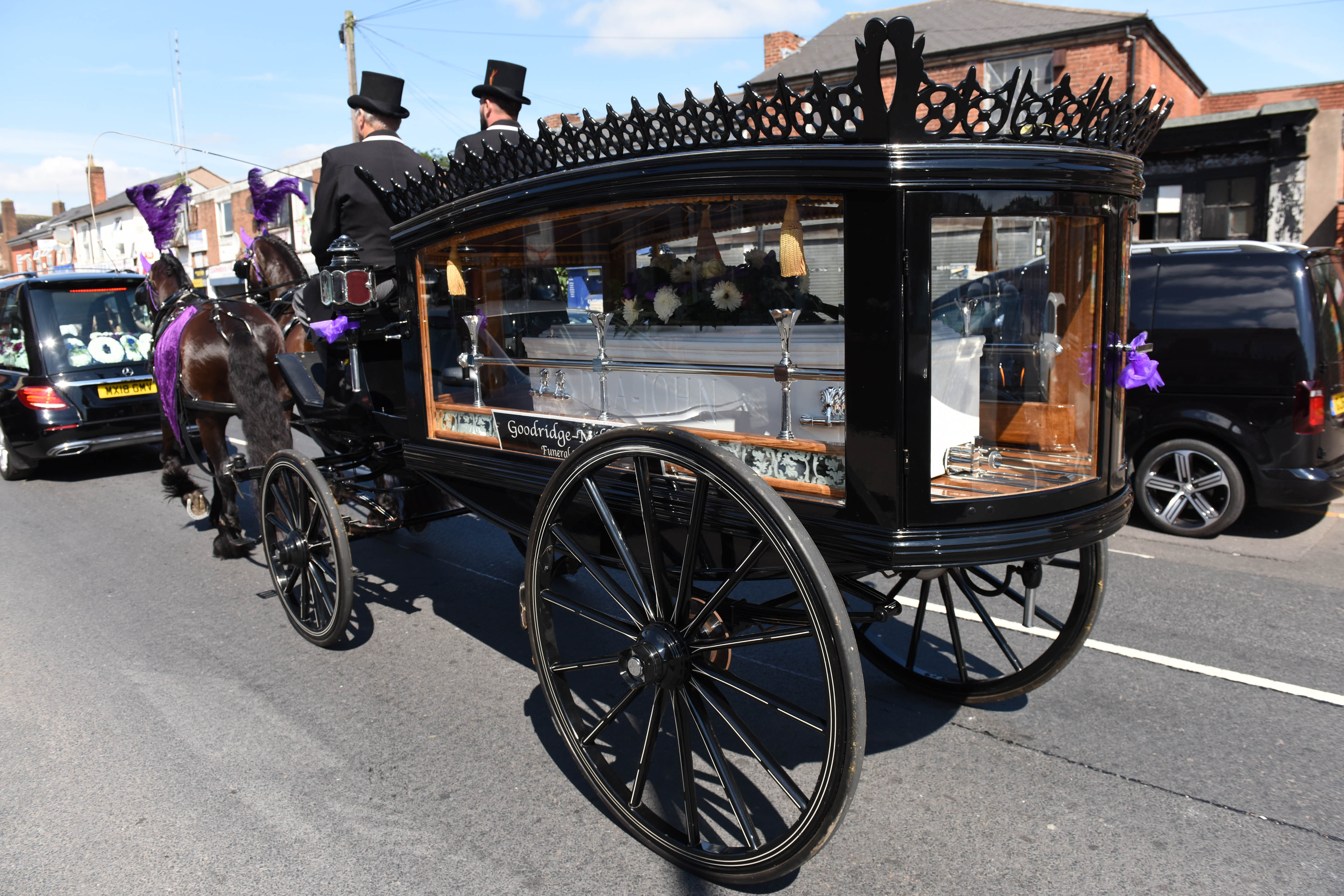