Budapest: Hungary will start importing small quantities of a Russian-made COVID-19 vaccine in December for final testing and licensing, Foreign Minister Peter Szijjarto said in a Facebook video on Thursday.

Budapest will ramp up Russian vaccine imports from late January and a Hungarian company may be able to switch from flu shot production to the Russian COVID-19 vaccine and start producing it, the minister added. 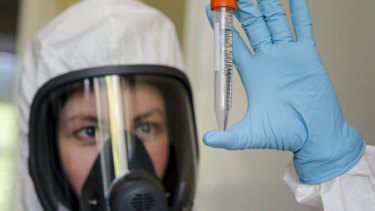 An employee shows the new vaccine at the Nikolai Gamaleya National Centre of Epidemiology and Microbiology in Moscow.Credit:AP

"Russia will begin shipping small quantities of the vaccine in December in order to complete clinical trials and examine the vaccine here and complete the licensing process," he said. "They said they could begin large-scale shipments from the second or third week of January."

What that entails will be clarified in two weeks time as Russian Health Minister Mikhail Murashko, who had discussed the deal with Szijjarto, told the Hungarian diplomat that facilities in Russia were preparing for large-scale production.

Even with mass production of the Russian vaccine hitting snags recently, countries have lined up to place orders for it, with Brazil saying it expected to have a vaccine deployable by the middle of next year.

Russia has agreed to supply its "Sputnik V" vaccine to Brazil, submitting preliminary documents to health regulators there last week.

Argentina is also expecting 10 million doses of Sputnik V between December and January.

Russia, raising eyebrows in the West, is rolling out Sputnik V for domestic use despite the fact that late-stage trials have not yet finished. Russians themselves are growing more sceptical about the vaccine.

It was unclear when Hungary planned to deploy the vaccine.

Szijjarto, who is in quarantine after contracting the coronavirus, said he displayed mild symptoms but was hoping to get better and was working through the sickness.

END_OF_DOCUMENT_TOKEN_TO_BE_REPLACED

END_OF_DOCUMENT_TOKEN_TO_BE_REPLACED
Recent Posts
We and our partners use cookies on this site to improve our service, perform analytics, personalize advertising, measure advertising performance, and remember website preferences.Ok