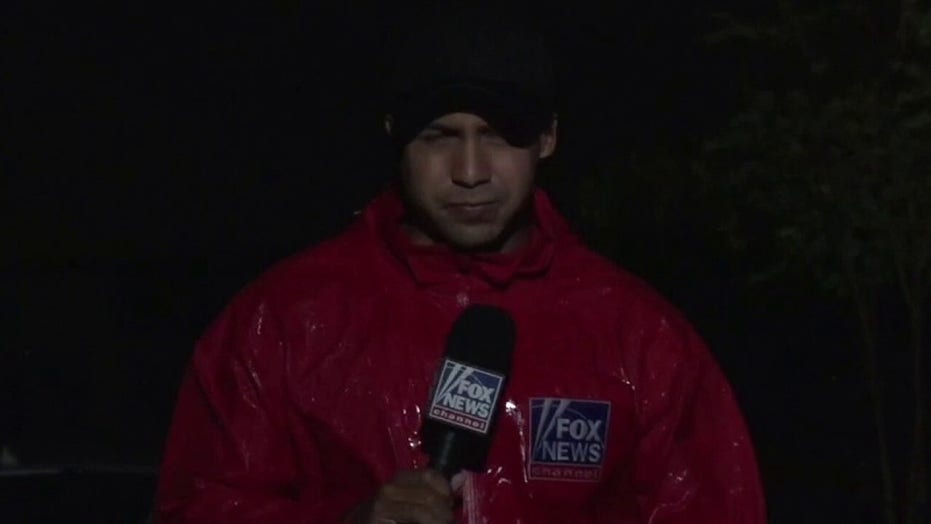 56,000 people are without power in Southeast Texas due to Hurricane Laura; Bryan Llenas reports from Port Arthur, Texas.

More than 650,000 customers were without power in Texas and Louisiana Thursday, as catastrophic storm surges and extreme winds battered coastal areas under evacuation orders, and a weakening Hurricane Laura continues on its path north toward Arkansas.

Hurricane Laura moved ashore before 1 a.m. CDT just east of the Texas-Louisiana line near Cameron Parish, La., with the strength of a Category 4 hurricane, maximum sustained winds at about 150 mph, and a minimum central pressure of 938 mb.

More than 134,000 customers were without power in Texas, with those in the southeastern part of the state in Jefferson, Orange and Hardin Counties the most affected. More than 518,000 customers were suffering from outages in Louisiana, as the eye passed over Lake Charles, ripping off roofs, downing trees and bringing high floodwaters.

In a matter of hours, Laura weakened to a Category 2, as the eyewall of the hurricane was pushing inland across southwestern Louisiana. Now a Category 1 hurricane, Laura remains on course for Arkansas, and Gov. Asa Hutchinson declared an emergency, set aside $250,000 for the state to prepare for the hurricane’s impact and has search and rescue teams on standby.

"Hurricane-force winds and widespread damaging will continue to spread well inland into portions of extreme eastern Texas and western Louisiana through the day," the hurricane center said.

Gov. Greg Abbott, a Republican, on Wednesday warned Texans who had not already left areas under evacuation orders to get out of the storm’s path, as power outages were expected and bringing generators into homes posed a risk of carbon monoxide poisoning. 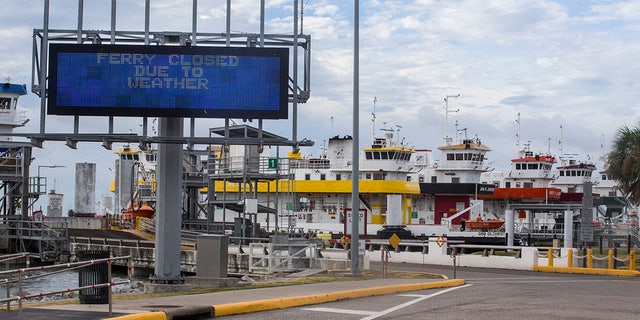 The ferry terminal is closed due to Hurricane Laura Wednesday, Aug. 26, 2020 in Galveston, Texas. (Brett Coomer/Houston Chronicle via AP)

"The power of Hurricane Laura is unprecedented, and Texans must take action now to get out of harm's way and protect themselves," Abbott said at a press conference in Austin. "The conditions of this storm are unsurvivable, and I urge Southeast Texans to take advantage of these final few hours to evacuate, secure their property, and take all precautions to keep themselves and their loved ones safe.

Texas Emergency Management Chief Nim Kidd made a last-ditch attempt Wednesday to urge remaining residents to head for Dallas, Austin and San Antonio. As thousands of evacuees filled up spaces at shelters, others were forced to sleep in cars or were issued hotel vouchers, as the government seeks to avoid crowding amid the coronavirus pandemic.

Abbott said the state would not be able to rescue those left trapped in Hurricane Laura’s path from Wednesday evening until 9 a.m. Thursday, as blocked roads, downed power lines and flooding could get in the way and make sooner search missions too dangerous, the Texas Tribune reported.

END_OF_DOCUMENT_TOKEN_TO_BE_REPLACED

END_OF_DOCUMENT_TOKEN_TO_BE_REPLACED
Recent Posts
We and our partners use cookies on this site to improve our service, perform analytics, personalize advertising, measure advertising performance, and remember website preferences.Ok