Home » World News » ‘I have a gigantic alligator…in my kitchen’: 11-foot gator breaks into home

‘I have a gigantic alligator…in my kitchen’: 11-foot gator breaks into home

An 11-foot alligator has been detained for breaking and entering a Florida home after its resident woke up to find the reptile taking over her kitchen.

The offense began just before 3:30 a.m. Friday when a newspaper delivery woman called 911 to report a “large alligator acting in an aggressive manner” in front of a home on Eagles Landing
Circle West in Clearwater, Florida, according to a press release by the Clearwater Police Department.

The woman told emergency dispatchers that she saw a “huge” alligator “thrashing in front one of the units” of the condominium complex, according to the 911 call.

“And if that owner wakes up, they’re gonna be in big problems, ’cause it’s right there in front of their door, and he’s making a sound,” she said. “He’s thrashing.” 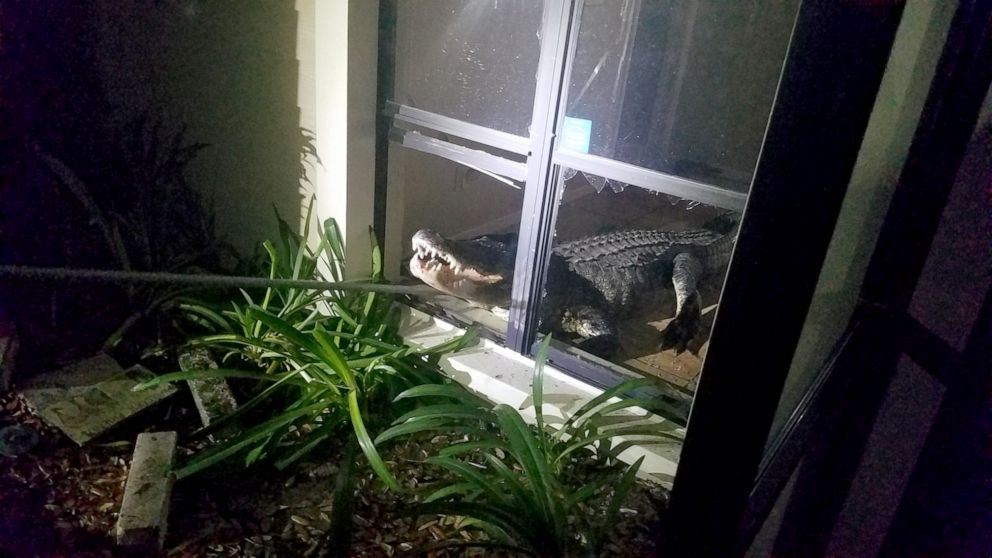 The gator was trying to enter the sewage drain when the woman first spotted it.

“I wasn’t trying to get too close to it, ’cause that thing is huge,” she said.

Less than five minutes later, the resident called 911 to let police know a large alligator had gained access to her home.

“I have a gigantic alligator who came in through my garage in my kitchen — a huge one,” she said.

The befuddled emergency dispatcher replied, “I’m sorry. Is it in your house?”

And when the dispatcher confirmed that it was in the kitchen, the terrified resident responded, “Yes! I don’t know how it got here, but it’s here.”

When the dispatcher asked if she was safe, the woman replied that she was in her bedroom.

“I’m not leaving here until you get here,” she said.

Officers then responded to the scene and waited for gator trappers to arrive.

Understandably, the alligator resisted arrest, knocking over a wine shelf in the process, causing several bottles of wine to shatter.

“The alligator did suffer minor cuts to a shoulder but the majority of the red liquid on the floor was wine,” police said.

By 4:49 a.m., the trappers managed to wrangle the alligator out through the windows, police said. The male gator is now being housed locally in a private location to rest and recover from what the trappers described as “a traumatic experience.”

If the gator is deemed to be a good candidate for relocation, it will then be transferred to a private gator farm in Fort Meade, Florida.